Two years ago, the varsity softball team fielded eight sophomores and played to an impressive 15-3 regular season record. The next year, the class of 2007's ranks swelled to 12, and the Blazers finished the season as Division Champions with a 15-1 regular season record, the best in Montgomery County. Now, with high expectations and 13 seniors leading the way, the Blazers look to the upcoming season to duplicate their success and carry it into the playoffs. 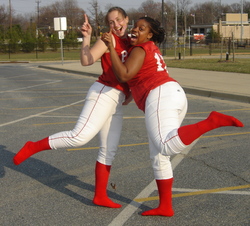 Photo: Seniors Diane Chase and Shante Henderson celebrate after winning their first game of the season. The girls softball team looks towards making it to the playoffs.

Photo: Seniors Diane Chase and Shante Henderson celebrate after winning their first game of the season. The girls softball team looks towards making it to the playoffs.

The Blazers hope to change that trend, and are focused on advancing to the state playoffs this season. "This team has already done a whole lot. But the way this team can go down as the best team in Blair history is to go further in the playoffs," said head coach Louis Hoelman. "We're going to use the regular season to help us make decisions that will help us in the playoffs."

With the playoffs positioned as the pinnacle of their season, the Blazers are looking to pace themselves through the regular season so that they can peak in the playoffs. "We don't want to burn out. We just have to keep working harder and harder and build up to the playoffs," said senior co-captain Anna Szapiro.

A major strength for the team this season will be the depth of its roster. With 13 experienced seniors, many of whom have been playing varsity softball together for three or four years, the Blazers will have an edge over other teams. "It's a unique situation where we will be starting nine seniors who all have varsity experience. It should be an advantage," said Hoelman.

Lieberman, Szapiro, and fellow senior co-captains Anne Denenberg, Michelle Linford and Allison Rubin will lead the Blazers on the field. But Hoelman stressed that the team has depth and will not have to rely on a few key players for success. "It's everyone this year. We're really deep so it's just a matter of coming together as a team," Hoelman said.

With the stage set for a stellar softball season, the Blazers face mounting pressure to succeed in the playoffs in the last season for the 13 seniors on the team. "There's a lot of pressure because you never really know what's going to happen when you step on the field for the first game," Lieberman said. Because the playoffs are single elimination, one bad game could prematurely end the team's season.

Next season, the varsity softball team may face a rebuilding year as it returns only three players, adding pressure for the team to succeed this year. While Hoelman agrees that Blair will lose "half of its softball program" with the graduation of the 2007 seniors, he does not view this season as varsity softball's last year of dominance. "There are some good JV players. I'm focused on this season, but I'm confident that we'll be good again next year," Hoelman said.

Hoelman echoes Rubin's excitement and adds that the team's seniors deserve to succeed this season. "I'm excited for them. It's these players' time to do it. They deserve to go out with a bang and make it to states," Hoelman said.

The varsity softball team plays its home opener on March 22 against Blake at 3:30 p.m.