Two years ago, as Blair softball geared up for a playoff run, Richard Montgomery came to Blazer Field and shocked the Blazers with a furious seventh-inning rally that ended Blair's season. Last night, the Rockets strolled onto Blazer Field hoping to upset the Blazers for the second time in three seasons and once again end Blair's quest for a state championship. But the Blazers, a handful of whom were on the team that fell to R.M. in 2005, were determined to make the 2007 playoffs a success. The dominating pitching of senior Annie Denenberg and an onslaught of offense from a loaded Blair lineup fueled the Blazers to a 9-1 win over the visiting Rockets.

"This game was really personal," said senior catcher Claire Lieberman. "Two years ago they ended our season, so we really wanted to win." 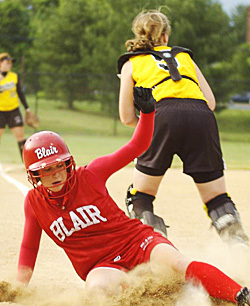 The Blazers (14-2) wasted no time putting runs on the board. In the bottom of the first inning, senior Michelle Linford drove in two runs with a bloop single, giving Blair the early edge. Then, Denenberg started dealing. She struck out the final two batters in the top half of the second, and after the Blazers went down in order in the bottom half of the inning, Denenberg rallied to make quick of the Rockets in the top of the third.

Blair's offense heated up in the bottom of the third, with none other than star senior Allison Rubin getting things started. Rubin dropped a bunt down the third base line and jetted to first for a single, and stole second easily. After senior Juliet Garlow struck out, Rubin took third on a passed ball. Senior Claire Lieberman then sent a warning track shot into deep left-center, scoring Rubin to give the Blazers a 3-0 lead.

After senior Anna Szapiro walked, Linford stepped to the plate with runners on first and second. Linford sent another bloop shot into shallow right field, scoring Lieberman. Denenberg then came to the plate, looking to lay down a sacrifice bunt to move the runners over. But Deneberg's bunt popped up over the Rockets' pitcher, allowing her to reach first safely.

With senior Dani McClay at the plate, an errant return throw by the Rockets' catcher intended for the pitcher allowed Szapiro to score and Linford and pinch runner Katie Scott to advance. McClay struck out swinging, but with two runners in scoring position, senior Liz Scroggs still had a chance to give the Blazers extra run support. Scroggs skied a pop-up to the right side of the infield, but Richard Montgomery's second basemen bobbled the ball, allowing two more runs to score. The Blazers batted around in the inning and scored five runs to take a 7-0 lead.

The Rockets finally got on the board in the fourth, tagging Denenberg for three hits in the inning. With runners on second and third and one out, Richard Montgomery appeared to score a run when a groundball went through the left side of the infield. But the ball hit the Rockets' baserunner heading to third. The runner was called out, and by rule no other runner could advance on the play. But the Rockets managed to manufacture one run on the next batter's ground ball through the middle before Denenberg got a Rocket to pop out to McClay to end the inning.

With Blair leading 7-1, Linford tripled to deep left to start the Blazers half of the fifth. Denenberg then laid down a squeeze bunt that scored Linford. After McClay reached base on an infield single, pinch-hitter Diana Chase ripped a double to center, scoring pinch runner Katie Scott and giving Blair a 9-1 lead. 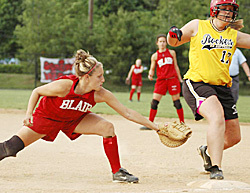 Photo: Senior Dani McClay tags a runner on first during a pickoff attempt.

Photo: Senior Dani McClay tags a runner on first during a pickoff attempt.

Neither team could muster any offense in the sixth, so the game headed into the seventh inning with the Blazers on top. The Blazers were not overconfident, though, remembering that in '05, the Rockets scored three runs in the last inning to stun Blair 3-2. After a fly out to left field and a strikeout, the Blazers had just one out to go. The Rockets' hitter sent a hard grounder into right field, a ball that against any other team would be an automatic single. But not against the Blazers. Rubin, Blair's right fielder, charged the ball, wound up and fired a bullet to McClay at first, retiring the runner for the game's final out.

The game's final play was no coincidence. Head coach Louis Hoelman plays Rubin, the team's most gifted player, in right to make plays like the one that ended last night's ballgame. Rubin's cannon arm gives her the ability to gun down runners at first from the outfield, and according to Lieberman, it's a play that the team practices. "Allison has such a good arm, she can make that play no matter what," said Lieberman. "It's just usually there's a bad bounce or not enough time." Rubin will take her rocket arm to Division-I Delaware State next year on a softball scholarship.

Blair's 9-1 win sends a message to the rest of the county: look out. The Blazers have been building for 2007 for four years, as the squad's starting lineup is made up entirely of seniors. The Blazers have talked about winning a state championship each of the past three seasons, but have been knocked out early in the playoffs each time.

Denenberg, the team's ace, hurled a stellar game, striking out five, giving up just one run, and allowing just three Rockets to reach base after the fourth inning. This game was the ultimate redemption for Denenberg, who was the losing pitcher in the 2005 home playoff loss to the Rockets. And Hoelman won't take any chances tomorrow night; Denenberg will be on the mound as the Blazers try to get past another rival.

Blair softball's second-round playoff game is Wednesday, May 16, 2007 at 7 p.m. at home against the Gaithersburg Trojans.


Abe Schwadron. Abe is a huge basketball, baseball, and football fan that likes to read up on sports in SLAM, Sports Illustrated, and ESPN magazines. Hobbies include streetball, poker and film-making. A sneaker addict, Abe likes to keep his kicks fresh. Abe likes reggae and hip-hop music, … More »