Soliciting the country to death

Continuous campaigning is harmful for the government

More than 50 candidates are currently running for president of the United States, fighting for a chance to represent their party and spending an absurd amount of money on political advertisements in the process. On Oct. 15, candidates filed spending reports to the Federal Election Commission (FEC), revealing the high cost of campaigning – a whopping $420 million so far. Despite the considerable number of issues that the candidates need to debate and discuss, candidates are going about their campaigns wrongly, spending enormous amounts of money and time in order to gain publicity – a counterproductive exercise. 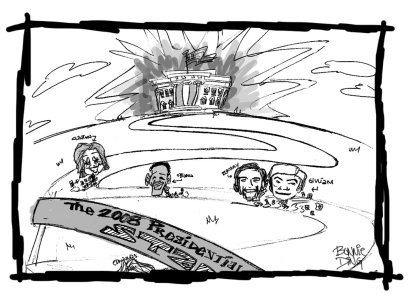 Photo:
The first campaigns began too early – in 2006 when candidates created exploratory committees and announced their intentions to run. However, campaigning does not need to occur so long before the election since there are more important things for Americans to worry about, such as foreign and domestic policies.

Candidates campaign so early merely to show that they are running for office; it is all about publicity, an important component of a campaign's health. This method is great to help candidates gain publicity, but is detrimental to the country. The candidates, most of whom are current lawmakers, take time off from their legislative duties to make speeches, create advertisements and attend fundraisers. But by devoting more time to their jobs, candidates would sufficiently show that they are competent and qualified for the presidency – actions speak louder than words.

Today's potential candidates choose to reach out to the public by spamming Americans with their names and faces, but they can only do this with money. In the end, whoever has more money has more publicity, power and visibility, increasing his or her chances of victory. Americans have donated more than $420 million to support candidates even before primary elections in order to narrow down the number of candidates in each major party to two, according to FEC reports. This exorbitant spending on different candidates is unreasonable, since there are so many candidates being considered for each major party ticket.

According to FEC campaign financing reports filed by Oct. 15, Hillary Clinton, Barack Obama, Mitt Romney and Rudy Giuliani have all raised more than $45 million, with Hillary Clinton topping the list with $90.9 million. Many more millions of dollars have gone to other candidates; John McCain, John Edwards, Bill Richardson, Chris Dodd and Fred Thompson have all raised more than $10 million.

Simply put, this year's presidential race is overfunded. One billion dollars should go to a better cause than candidate publicity; there are many domestic issues such as health care, immigration and education that require attention.

Lavish displays of wealth through advertising may impress the wealthy, but they will not register among the majority of working Americans who would be more comfortable knowing that their national leader is willing to work hard for the good of the country and not just for the good of their party.