Sometimes it's not fine

The National Football League (NFL) continues to shock football fans every week with unreasonable and controversial decisions, the most recent being the fining of wide receiver Andre Johnson of the Houston Texans and Cortland Finnegan of the Tennessee Titans after the players completely beat each other in the middle of the football field last Sunday. This was the second time the two players have clashed with each other, and the NFL should have given much harsher consequences. 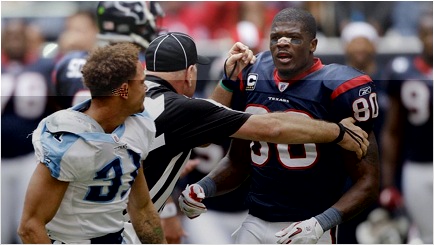 Johnson started the game in full steam. He set an NFL record after receiving 60 or more passes consecutively for the eighth season in a row. Finnegan, however, spent the game trying to get under Johnson's skin, which proved to be effective late in the fourth quarter. At the beginning of an offensive play by the Texans, Finnegan jabbed Johnson in the neck and pushed Johnson overboard with his unsportsmanlike conduct.

Johnson proceeded to yank off Finnegan's helmet and throw fast and furious punches straight into his head. Referees eventually broke up the fight and both players were thrown out of the game. This was Johnson and Finnegan's second clash, the first being last season, when Johnson pulled Finnegan into the turf by the facemask.

As Texans fans cheered Johnson out of the stadium, they didn't seem to be thinking about the repercussions that come with assaulting another player. Johnson and Finnegan should have not only been thrown out of the game, but also suspended from at least one more game for their roughness they showed on the field. Finnegan's childish antics do not belong in the NFL and Johnson's response to his actions was equally unprofessional. The league decided instead that Johnson and Finnegan would only have to pay a fine of $25,000, an $18,000 increase from their first brawl, without suspension. This should be considered an unreasonable punishment. The NFL charged the exact same fine to Pittsburgh Steeler outside linebacker James Harrison for a helmet-to-helmet hit on Buffalo Bill quarterback Ryan Fitzpatrick. At least Harrison was fined for playing and not for smashing his fists into other player's face.

If NFL players are being fined as a result of unfair or violent hits on defenseless players, then shouldn't NFL players that intentionally get into fights receive more serious consequences? Johnson and Finnegan's fight was not only unsportsmanlike and unfair to the other players on the field, but it was outright pathetic. Their schoolyard fight demonstrated their need to take time off the field, but the NFL would never suspend Johnson, one of the best wide receivers in the league today, a player that brings in viewers at home and fans in the stadiums, which in turn brings in hard cash.

Johnson may continue to break NFL records for the rest of his football career, but in the Texan's game Thursday night against the Eagles, he should have been on the sidelines instead of on the field. Finnegan may have not thrown the final punch, but his uniform should be hung up for a few games as well, especially after instigating the fight. The next time a fight of this magnitude breaks out on NFL turf, the league will hopefully handle and set a better example of the players involved.