Denver Nugget power forward Carmelo Anthony is among the top players in the National Basketball Association (NBA). Ever since the Nuggets recruited him in the 2003 NBA draft, Anthony has been putting up big numbers, averaging 24.7 points and 6.2 rebounds per game. Recently, a large amount of controversy has begun to surround Anthony, as his current contract with the Nuggets comes to an end following the current NBA season. With the future of his career currently up in the air, Anthony should be given the opportunity to return to his home state of New York to play for the Knicks. 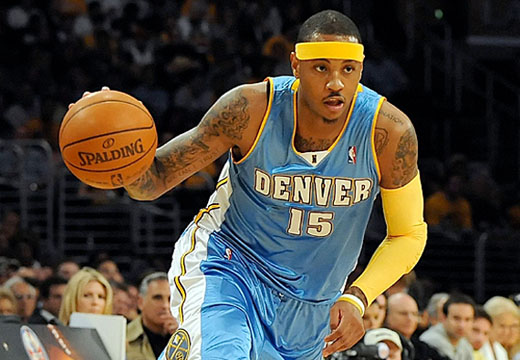 Photo: As Carmelo Anthony's contract comes to an end, the future of his career is yet to be determined.

Photo: As Carmelo Anthony's contract comes to an end, the future of his career is yet to be determined.

Three teams are currently involved in the Anthony trade argument: the Denver Nuggets, the New York Knicks, and the New Jersey Nets. If the Nuggets decide not to trade Anthony before his contract ends, he will become a free agent and the franchise will no longer be able to make any money off of him - unless he decides to remain in Denver. In order to escape the possibility of losing money at the end of Anthony's contract, the Nuggets are negotiating with both the Nets and the Knicks.

But the Nets are unwilling to complete a trade for Anthony unless he readily agrees to sign a three year, $65 million contract extension as part of the transaction in what is known as an extend-and-trade. The New Jersey Nets officials, led by majority owner Mikhail Prokhorov and minority owner Jay-Z, plan to entice Anthony with the news of the hopeful acquisition of several future prospects and the fact that the team will move their franchise to Brooklyn, New York starting in the 2012-2013 season.

Although the Nets' deal seems like a pretty hard bargain to pass up, Anthony has continually expressed winning an NBA title as his main source of motivation and concern. In an interview before a game against the Cleveland Cavilers on Jan. 15, Anthony said that his focus isn't so much about moving to a big market or making big money, but capturing a title. "I'm going into my ninth season. I have no time to waste right now," Anthony explained. "I want to see the light at the end of the tunnel in my future. That light is a championship."

Truthfully, if Anthony went to the Nets he would be in a terrible position to make the playoffs. They have won less than 15 games this season and moving to a new city will not suddenly give them the ability to become an elite team. It will take years of reconstruction to turn the franchise around.

Anthony wants to go to New York and play with all-star forward/center Amar'e Stoudemire and electric point guard Raymond Felton. Although the trade will take time to fall into place, once Anthony goes to the Knicks he will be a great fit, making the Knicks a tough team to beat in the Eastern Conference. Anthony wants to go to a team that can win a championship and the Knicks already have several talented young players such as forwards Wilson Chandler and Danillo Gallinari on the team. With Anthony's experience and maturity brought to the table, the Knicks would be a dynasty to compete with for years to come.