Charlie Sheen may be mentally ill. Let's get that out in the open. Sheen has been acting more than normal celebrity-crazy lately (see SCO's definition of "sheenin") and the media seems to be taking advantage of a man that does not seem to understand he is not in the right of mind. I mean a machete? Really? That just spells unstable. 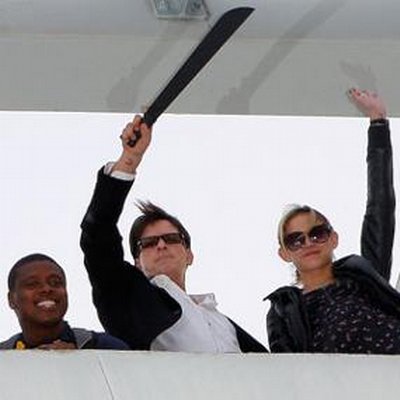 Photo: After being fired from "Two and a Half Men," Charlie Sheen waves a machete from a roof.

Photo: After being fired from "Two and a Half Men," Charlie Sheen waves a machete from a roof.

From locking hookers in bathrooms to checking himself into rehab, Sheen has seemed to be on a downward spiral for quite sometime and the media never fails to capture every minute of his horrible breakdown. To make matters worse it seems as if Sheen is flooding our worlds through every technological means possible: Facebook, Twitter and even Youtube. It seems completely unrealistic that someone could get two million followers in under three days on Twitter, but Sheen managed to do so. Unfortunately for Sheen that popularity most likely isn't coming from his acting career - or any of his talents, for that matter.

What used to be one of the most popular shows on television fired Sheen on Monday, for pretty obvious reasons. Sheen's former sitcom "Two and a Half Men,” brought him nearly $2 million an episode, making him the highest paid actor on television, but his behavior outside of the studio and sometimes even on set caused him trouble.

The large amount of media attention that Sheen has been receiving is ridiculous. Celebrities such as Sheen top media headlines far too frequently, drawing more attention from Americans than most political and world issues. Not only are these media frenzies a waste of time for us, but it also diminishes many celebrities' careers to a joke.

The media has to simmer down on their coverage of Sheen's outrageous behavior for one of two possible reasons. One: Sheen is mentally ill and needs help and not encouragement from the media or; two: Sheen is doing this entire stunt for more publicity and nothing is actually wrong (he is an actor). Either way, the media needs to stop giving him any attention because whatever they say fuels his fire to put on a more shocking show every time. Because, of course, he is winning.