What a difference a few months can make. At an Annapolis show last May, Eric Hutchinson was playing to a half-filled room whose patrons seemed more interested in their Tavern burger than the talent on stage. Sunday night, the singer/songwriter was the unmistakable center of attention at his sold out show at Jammin' Java in Vienna.

Armed with intelligent rhyme and infectious rhythm, Hutchinson is a dreamboat; there's no denying it. A Takoma Park native and Blair alumnus whose most recent album propelled him to a top ten spot on iTunes, he approaches his shows like he's hosting a neighborhood block party, connecting personally with every member of his multi-generational audience. 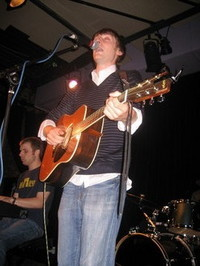 Photo: "Pretty good" is an understatement: Blair graduate Eric Hutchinson and his acoustic guitar won't be unknown for much longer.

Photo: "Pretty good" is an understatement: Blair graduate Eric Hutchinson and his acoustic guitar won't be unknown for much longer. Photo courtesy of Hannah Wolfman-Arent.

Hutchinson's most recent album, "Sounds Like This," denotes a transition from the coffeehouse to the dance floor. Whereas his first two EPs successfully relied on his perfected skill to float clever rhymes over simple folk-pop chord progressions, "Sounds Like This" shows he's experimenting with vocals and growing into a bluesy, more melodic performer.

Walking on stage with a new a drummer and bassist, both of whom provided a powerful back beat to enhance Hutch classics, Hutchinson introduced himself by explaining how the show would be an "interactive" experience: "I'll play some songs for you, and you can go to the merch booth and buy a CD." He showcased incredible range, pulling falsetto out of thin air, which contrasted beautifully with his piano compositions for songs like "Food Chain," "Oh" and "Call Me Back" (during which he involved the audience in a call and response lament of a date who didn't return his calls).

Hutchinson's charm is his ability to make fun of himself, for example those ubiquitous "Eric Hutchinson is Pretty Good" t-shirts. But he might need to change his act; thanks to a plug from celebrity blogger Perez Hilton, the nation is slowly realizing this kid is more than mediocre. Nevertheless, his sarcastic comedy kept the crowd sporting non stop grins. Any true Hutchhead will agree - the only thing lacking from "Sounds Like This" is the witty commentary that he brings out during his live performances.

He opened Sunday night with "You've Got You," complementing his soulful voice with a dramatic piano solo. Segueing onto a more serious note, Hutchinson expressed the tribulations of a long-term relationship during "It Hasn't Been Long Enough," a Billy Joel-style ballad. "I just broke up with my girlfriend," he explained, as a chorus of "thank god!" rang throughout the female population.

Hutch's bandmates stepped off stage for a couple songs to allow his acoustic soul to appear in true form – bare of back up vocals, complex arrangement and any percussion besides his creative use of the hand slap.

No Eric Hutchinson show is complete without the Justin Timberlake roast. "Who wasn't totally into JT this summer?" he asked the audience, and then proceeded into a medley of Timberlake's summer sensations, explaining how Justin lies to girls and recycles hits.

On one of the most touching songs on "Sounds Like This," "Oh," Hutchinson assembled a series of everyday anecdotes that delight him ("I picked a pocket just to give it all back/ Took out the license left the money in tact/ The man said 'I wanna thank you' and I had to ask why/ 'That was the old me I was living a lie'"), stringing them together with a self-affirming chorus. 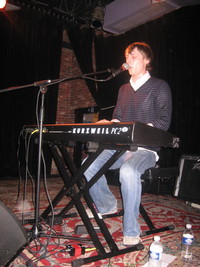 Photo: Preppy but not pretentious, Eric Hutchinson is the piano man.

Photo: Preppy but not pretentious, Eric Hutchinson is the piano man. Photo courtesy of Hannah Wolfman-Arent.

Hutchinson topped that off with another fan favorite – his mash up of The Temptations' "My Girl" with R. Kelly's "Ignition Remix" – two songs everyone knows the lyrics to and no one can pretend not to like.

A couple outstanding numbers brought the evening to a powerful conclusion, including "You Don't Have to Believe Me" – a contagious head bopper that's both appropriate for the club scene and respectful to women. This combination creates a formula, which, as Hutchinson put it, is "loved by fathers and hated by fifteen-year-old boys." Sweat flying, hands in the air and bodies swaying, the audience embodied Hutchinson's empowering lyrics: "You don't have to believe me when you're shakin' what you got/ But you sure better believe me when I tell you your mind's what's hot!"

Opening for Hutchinson was DC-based group the Sketches, playing an acoustic set as part of their month-long residency at Jammin' Java. Having garnered comparisons to U2 and early Beatles, the Sketches' awkwardly melancholy tunes were a disappointment, sounding like a less-melodic Snow Patrol. Even "Apt. 101," their catchiest piece vocally, suffered from obnoxious repetition and ineffective harmonization. The vocal harmonies they were striving for finally worked on the cheesy love song "My Mona Lisa," which was unfortunately plagued by technical difficulties. More unfortunate was the band's reaction to the tech issues; in starch contrast to Hutchinson they refused to take it lightly, carrying on with gravity amidst laughter in the crowd.

Luckily, Hutchinson never faced a mishap or awkward moment, because of the same down-to-earth qualities that incline him to chat up his fans until long after the music is over. E-hutch – whether he sticks with the band or not – certainly has a sound of his own, and we need more of him on the radio. Our hometown hero is bound for greater arenas, but there will always be a place for him on native soil. As long as he calls us back.