It is a timeless story, one that audiences can envision occurring just as easily today as four centuries ago. It is one of the most renowned tales of our time, told by the most famous playwright the world has known. It is a play ripe with all the ingredients of the perfect tragedy; betrayal, revenge and murder shape Shakespeare's "King Lear", one of the prolific playwright's eminent dramas. The Folger Theatre, in collaboration with the Classical Theatre of Harlem, demonstrates just how eternal "Lear" is in its powerfully charged take on the classic, and director Alfred Preisser offers a fresh perspective by setting the story in the mystic culture of ancient Mesopotamia.

Critics often point to "King Lear" as one of Shakespeare's most moving and profound tragedies. Shakespeare's tale revolves around Lear, an aging king who decides to split his kingdom between his three daughters based on, what he perceives to be, their love for him. When his third daughter, Cordelia, refuses to flatter him with lavish praise, Lear gives her nothing and instead leaves the entire kingdom to his other two scheming daughters. "King Lear" is primarily about the transformation of the once proud king into an unstable lunatic after he realizes that his two eldest daughters, Goneril and Regan have betrayed and alienated him once they received their share of the empire. Ultimately, it is only the pure-hearted Cordelia who can offer redemption and salvation to her father. 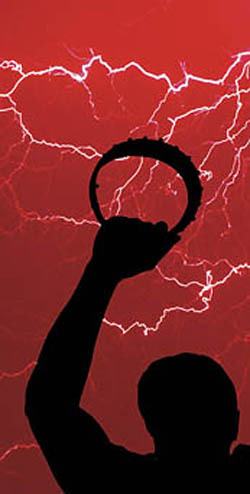 The Harlem players, most of them African American, provide the energy and acting ability necessary to transform "Lear"'s medieval British setting into the foreign culture of the Mesopotamian empire. Seeing the half-naked actors deliver lines written in the flowery English language composed several millennia later takes a little getting used to. But it's a pleasant surprise, one that breathes new life into a classic and allows the actors to deliver the lines with an energy and physicality that would be otherwise limited by sometimes stuffy period sets.

Tony-nominated Andre De-Shields leads the Harlem ensemble as Shakespeare's soul-ravaged Lear. De-Shields, a veteran actor, is a captivating presence whenever on the stage. It takes an actor with wide-range to play the unstable Lear, a character who transforms from a proud king to a ranting lunatic in minutes. From his first majestic lines to his last incoherent sputterings, De-Shields is moving.

Collectively, the Harlem Players seem to generate an electric energy onstage, a force that heightens the drama and makes the tension tangible. Ty Jones, who plays Edmund, the scheming brother of the noble-hearted Edgar, makes sparks with his energy. Edmund's character is intriguing, the bastard son of one of the king's noblemen who feels deprived of power because of his unfortunate stature. Although ultimately a villain, Edmund garners some sympathy from the audience with thought-provoking social commentary regarding heredity. Jones' plays the enigmatic character with a forceful blend of humor and spite"one minute charming the audience with humorous one-liners, the next minute violently ranting about the inequity of lineage.

The Folger Theatre's time period twist on the play creates an entirely new exotic atmosphere that is sensual and captivating. Vivid colors abound on the set and in the character's period costumes, which for the men are loose baggy pants and vests and for the women, most often flowing silk skirts and colorful tops. Earth tones signify the more humble, noble-hearted characters, while purple, yellow, bronze and emerald greens imply royalty, hubris and sometimes treachery.

The set itself contributes a lot in its simplicity. The colorful mosaic on the floor signifies the time and place, as does the ominous moon that illuminates the stage during night time scenes. It is a sparse set, with only a few mobile benches, which are often wheeled around while characters are standing on them, an effect that adds to the mystic aura Preisser creates. The wide-open space enables the actors to fill and dominate the stage.

The live music also contributes to the exotic atmosphere. A one-man band performs in a cramped nook overlooking the set, and the wide array of traditional instruments (think gourd-drums etc.) provide the subtle undertones and dramatic overtones that compliment the action onstage.

In "Lear," Preisser maintains all of the key elements of arguably Shakespeare's most complex tragedy, while at the same time illustrating the timelessness of the play. On a chilly February evening, what could be better than warming up to a fresh, exotic take on a classic?

"King Lear" is playing at the Folger Theatre at regular and matinee times through February 25th.