Car crashes are the leading cause of death for 15-20-year-old drivers, and underage casualties account for 12.9 percent of all reported fatal crashes in 2007, according to the U.S. Department of Transportation. Despite Maryland legislators' efforts to restrict the number of automobile-related teenage deaths by passing and funding numerous laws and systems designed to help minors understand the dangers of driving, they have failed to institute effective laws that directly impact the target audience. As the number of fatal underage crashes spirals out of control, the only way to contain the situation is to earn the respect of the teenage population through the proper enforcement of realistic laws that will be easy to implement and monitor. 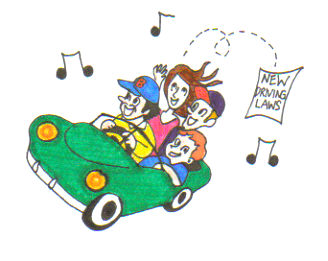 In 2004, 15 teenage drivers died in the Washington, D.C. area within a single month, according to The Washington Post. In response to the alarming death toll, in 2005, Maryland lawmakers expanded the "graduated driver's license" system, which limited some of the freedoms for young drivers. Teens under 18 were banned from driving non-family members for the first five months of holding a license, driving between midnight and 5 a.m. and using a cell phone while in the car. Yet despite the tightened driving regulations, between 2005 and 2006, Maryland's traffic fatality percentage increased by six percent, including a three and a half percent leap in teenage deaths, according to the Fatality Analysis Reporting System.

Aware that past restrictive driving legislation has proven ineffective, the public has urged Maryland lawmakers to consider tightening driving laws statewide and imposing stricter limits similar to those in Georgia, which have reduced the state's highway death toll for 16-year-old drivers by almost 40 percent in the past five years, according to The Washington Post. One of these proposed limits will bar all drivers under the age of 18 from having more than three teenage friends in the car, according to Maryland's Motor Vehicle Administration.

Although it is reassuring that Maryland is willing to take drastic measures to ensure the safety of minors, it is questionable whether this proposed law will be any more effective than the old ones, as the real problem is the malleability of the laws and not the lack of laws themselves.

Maryland needs to recognize that the police force does not have the ability to properly enforce the passenger legislation and should instead focus on the real culprit of teenage driving disasters - speed. According to the Sean Mullsteff Teen Driving Foundation, 34 percent of all teenage deaths are a result of speeding.

Despite similar rules in Georgia and Maryland, including the graduated license program, restrictions of the number of passengers in the car and bans on underage drivers driving after midnight, Maryland is still missing the single most important ingredient to road safety - suspension of any underage driver's license for six months if caught speeding 25 miles per hour over the speed limit. With nearly all of the recent fatal teenage driving accidents involving speed, Maryland legislators need to focus on passing laws with harsher penalties similar to Georgia's for underage drivers who have been caught speeding. Stricter repercussions for speeding will result in underage drivers obeying these laws to avoid losing their license. The fear of losing freedom is much more frightening than getting a ticket.

Maryland lawmakers are right to make a change in the state's current driving laws, but these laws must take into account the high level of appeal driving has for teenagers and balance it with the realistic danger and possibly fatal repercussions of driving. No matter what legislation Maryland lawmakers may pass, if the requirements are too hard to enforce, their good-willed efforts will fail again as teens will disregard the laws as yet another set of ridiculously idealistic rules they can manipulate to their advantage. These teenage fatality statistics demand reasonable laws that make sense on the road instead of just on paper.