"Spider-Man 2" proves that it's not easy being a web-slinging, wall-climbing superhero. You can't win the girl of your dreams, there's no time to get homework done and you can't even wash your Spidey suit without accidentally dying your underwear pink. Not to mention your duty to stop the obligatory arch-villain bent on destroying the world. 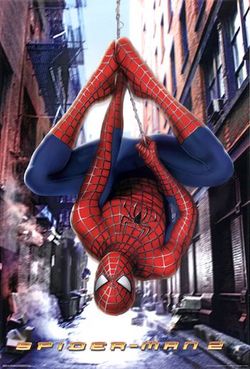 Photo:
Based on the comic book by Stan Lee and Steve Ditko, "Spider-Man 2" continues the story of Peter Parker (Tobey Maguire), an average nerd with some not-so-average super powers. Parker uses his powers, which include a "spider-sense," web-shooting abilities and wall-crawling, to battle crime in New York City. In the second movie, Parker faces off against the evil Otto Octavius (Alfred Molina), known as "Doc Ock" because of his eight limbs (four of which are huge, snake-like metal arms obtained in a freak science accident). Octavius is really not all bad, but unfortunately the creepy machine arms that stick out of his back and cause him to show a reckless disregard human life are in control of him.

Sound a little familiar? That's because "Spider-Man 2" has the same plot as the first movie: good scientist goes bad in a lab accident, and Spider-Man saves the day. However, "Spider-Man 2" more than makes up for the recycled plot through amazing special effects, humorous bits and an awesome nemesis. Doc Ock is much scarier than the goofy and manically cackling Green Goblin from "Spider Man." His metal arms move as though they are sentient beings and crush objects like cars and subway trains in an instant.

The visual effects in the film are stunning. Such action sequences as the fight between Spider-Man and Doc Ock on a runaway subway train are breathtaking. Spider-Man leaps through the air with such grace and agility that it's hard not to actually be jealous of his gifts.

One of the greatest things about "Spider-Man 2" is that director Sam Raimi spends as much time on the human aspects of Parker's life as the action sequences. The audience really gets to understand what Parker has to deal with by trying to lead a double life. Teen audience members can relate to Parker's lack of time and alienation. His homework doesn't get done, he disappoints those closest to him constantly and he can't seem to catch a break from anybody. He never gets credit for doing a thankless job.

"Spider-Man 2" is a little on the long side and does include some subplots that drag it out. Peter Parker's best friend, Harry Osborn (James Franco), the son of the Green Goblin, stumbles along in his own little subplot about his obsession to find and kill Spider-Man to revenge his father's death. While the storyline does get interesting at some points (including when Osborn discovers who Spider-Man really is), it would have been better if saved for the inevitable "Spider-Man 3."

Likewise, the ongoing love drama between Parker and Mary Jane Watson (Kirsten Dunst) gets long and boring after awhile. There is too much uncertainty between both parties for a believable romance, including Watson tearfully pleading with Parker to know what his "real feelings" for her are just after she announces that she will marry a famous astronaut. The audience is relieved when an exasperated Watson finally says, "Do you love me or not?" Finally! A real answer!

However, "Spider-Man 2," with stunning special effects and endearing human touches, easily crosses a seemingly unsurpassable barrier: the sequel is better than the original.