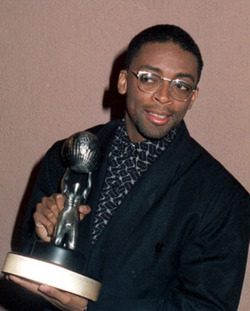 Undoubtedly, one of the most controversial directors in America is Spike Lee, a man who has enjoyed a prosperous career of more than 15 years. Lee has not only created great films but has built a production empire consisting of his own record label, 40 Acres & A Mule Musicworks, his own production company, 40 Acres & A Mule Filmworks, and his own chain of clothing stores, Spike's Joint.

He was born as Shelton Jackson Lee on March 20, 1957 to Bill, a talented jazz musician, and Jacquelyn, a teacher. At a young age, Lee was introduced, along with his siblings, to black art, literature and music. With this sound knowledge of his "roots," Lee went on to HBCU Morehouse College and received a Bachelor's Degree in mass communications. He later applied and graduated from the graduate film program at New York University's Tisch School of Arts.

Lee's first short film, "The Answer," was not given positive reviews by his instructors, but his next film, "Joe's Bed-Stuy Barbershop: We Cut Head," received the 1983 Motion Picture Arts and Sciences Student Academy Award. His first film to reach the big screen was "She's Gotta Have It," which was shot in 12 days and on a budget of only $175,000. Despite the film's humble beginnings, it grossed more than $7 million.

Following this success, he produced "Do The Right Thing," "Mo' Better Blues" and "Jungle Fever," which were all successful at the box office. Though Lee had many hit films, it was not until 1992 with the release of "Malcolm X" that his true talent was brought to light. Prior to shooting the film, the crew went through months of extended research and even took a trip to Saudi Arabia to view footage of Malcolm's pilgrimage to Mecca. The film was nominated for two Oscars but failed to win any awards.

After the success of "Malcolm X," his next three films, "Crooklyn," "Clockers" and "Girl 6," did not do so well at the box office. However, they are viewed as a bump in the road because Lee's next release, "Get On The Bus," received supportive reviews. Lee has also produced countless documentaries and short films and is the author of "Best Seat in the House: A Basketball Memoir."

Lee married Tonya Lewis in 1993, and they have two children.