You didn't really think something as lame and tacky as a writer's strike could keep us away forever, did you? As of April 21, "Gossip Girl" is back on the CW, and our extended spring break made the drama hotter than my new BCBG Max Azria prom dress. 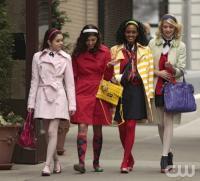 Photo: As the new alpha girl on campus, Jenny (Taylor Momsen) finds herself struggling financially to keep up with the expensive escapades of her new crew. Photo courtesy of CWTV.

Photo: As the new alpha girl on campus, Jenny (Taylor Momsen) finds herself struggling financially to keep up with the expensive escapades of her new crew. Photo courtesy of CWTV.


Last time we spoke, Blair Waldorf (Leighton Meester) had been officially ousted from her Queen B spot for freshman Jenny Humphrey (Taylor Momsen). B tried to make a quick getaway from the ugly mess she caused by cheating on true love Nate Archibald (Chace Crawford) with the perennially perverted Chuck Bass (Ed Westwick) by hopping on a private jet to France, but BFF Serena van der Woodsen (Blake Lively) talked her out of it. Some girls will never learn that nothing is secret in Manhattan's Upper-East Side.

J gets no love from the writers on episode one of the new season; the little Serena-wannabe tries to hide her socioeconomic status from her new circle by turning first to a pawn shop and then to crime. What made J mildly appealing in the book series – a sense of intelligence and naiveté that contrasted sharply with the other characters' superficial flakiness and cynicism – is completely absent from her character in the television show. She's easy to hate and seems to be even more of an obnoxious jerk than her predecessor B.

B and S are still the stars of the show, even while being shunned by the rest of the cast. Though they appear as though they should be well out of high school, Meester and Lively portray their characters with natural poise and grace. Lively in particular, as the always-lovable S, is pitch-perfect in her multiple roles as a best friend, older sister and feisty feminist – the latter when it comes to inappropriate remarks from soon-to-be step-brother C, anyway.

The second half of season one looks like it will live up to prior episodes with even more scandalous twists and turns. One may feel guilty for watching such ridiculous fluff, but the show is escapist entertainment at its best. Michelle Trachtenberg of "Buffy the Vampire Slayer" fame is scheduled to join the cast starting in tonight's episode as the mysterious "G," a friend of S's who will probably ruin all of our lives before making us fall in love with her.

The show is an addictive and fascinating romp into the world of privileged people who lead very unrealistic, yet aesthetically pleasing lives. Over-the-top side plots, check. Melodrama, check. Gorgeous clothes, check. Obscenely attractive cast, check please, waiter! This was a lovely dinner and I really enjoyed the chat but you know, I do have a social life to maintain. Things to see, people to do, that sort of thing. Make sure to tune in tonight so you don't ever get this out of the loop again.

You know you love me,