Spring spirit week to be held next week

The last spirit week of the school year will be held next week, from April 14 to April 18, and will include lunchtime performances and an outdoor pep rally. The SGA will also hold an outdoor "Screen on the Green" film screening of "Ferris Bueller's Day Off" at 8 p.m. Friday in the stadium. 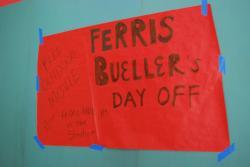 The spirit days are Beach Party Day on Monday, Vogue/GQ Day on Tuesday, High School Stereotype Day on Wednesday, Facial Hair Day on Thursday and Red Out Day on Friday. Each day of the week, the SGA will be selecting the "Mr. and Mrs." award winners, who will be announced at the end of the day and receive gift certificates.

Spirit week will culminate in a spring sports pep rally April 18 in the football stadium during sixth period. Sixth period will be cut short and students will begin to head down to the stadium at 1:15 p.m., although the pep rally will not begin until 1:35 p.m., according to SGA President Molly Martinez. Each of the 14 spring sports teams will be given two minutes each on the field.

There will also be lunchtime performances from various clubs on Thursday and Friday, according to SGA Vice President Amina Goheer.

The screening is free and open to all Blazers, their friends and their families. "I hope we get a lot of people to turn out, and this is an opportunity for people to come together," Chi said. "The whole point is to motivate spirit week."

The SGA has high hopes for a spirit week that will go just as well as fall's spirit week, if not better, according Goheer. "We had a really good outcome for last year and I hope kids enjoy the themes and have fun with them and be creative with it," she said.