Horvitz may tip balance of divided board

Springbrook junior Sarah Horvitz was elected on April 27 to succeed Blair senior Sebastian Johnson as the Student Member of the Board of Education (SMOB).

Horvitz, who defeated Quince Orchard junior Lindsay Abbett by an eight percent margin countywide, garnered nearly 64 percent of the 2,111 votes cast at Blair on April 26 and 27. The countywide vote was one of the closest in the 29-year history of the position, according to Horvitz. 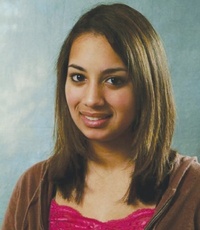 Horvitz attributes her victory to an extensive campaign that took her to many MCPS schools. Serving as Springbrook's liaison to the Montgomery County Regional Association of Student Councils (MCR), the countywide student government body, for the past two years also helped Horvitz make important contacts with politically active students. "Being involved in MCR has led me to meet students from Poolesville to Blair, and I have a better idea of how I can represent students across the county," she said.

Horvitz's previous SGA experience includes serving as Springbrook's second vice president this school year. Horvitz also served as Johnson's student advisory coordinator, which she says gave her an invaluable look at the inner workings of the Board.

Even with limited exposure to the Board, Horvitz is anxious to find out how being thrown into the center of debate regarding Board unity will affect her impression of the process.

Debate has recently split Board members along geographic lines, with division between upcounty and downcounty representatives over the construction of Seven Locks Elementary School [see "An embarrassing episode for MCPS," page 2, April 6].

Board members Valerie Ervin and Nancy Navarro were upset when Board Vice President Sharon Cox defended the $14 million proposal to rebuild Seven Locks before the County Council without prior approval of the entire Board. With Horvitz's election, the Board will likely have another member who will align with Ervin and Navarro in adopting a progressive downcounty platform, much as Johnson did, according to Ervin.

In the weeks after her election, the only congratulatory calls Horvitz received from Board members came from Ervin and Navarro, Horvitz said. "Me and Nancy know what it's like to not feel welcome on the Board by fellow members [sic]," Ervin said. "We wanted to make sure Sarah never felt like that."

Ervin is particularly excited about Horvitz's victory because it marks the first time a female SMOB has been elected since the 1999-2000 school year, when Springbrook's Laura Sampedro held the position. In preliminary talks, Ervin noticed that Horvitz's stances on county issues closely mirror her own. "I am ecstatic to see a woman elected with progressive ideas like myself. I hope she stays in Sebastian's tradition as a questioning, thoughtful Board member," Ervin said. Cox echoed Ervin's views.

Johnson, whose term began last July, thinks Horvitz is more than qualified for the position. "Sarah is ready to accept the responsibility of representing the students of our county," he said. When he leaves office June 30, Johnson hopes Horvitz will continue his practice of visiting area schools. To Johnson, these visits "show that you care and that you want student opinion."

Johnson has already begun to prepare Horvitz for the position by briefing her on Board procedures and explaining the importance of different types of paperwork and leaflets, Horvitz said. These discussions have also highlighted important issues Johnson would like Horvitz to continue to pursue.

Johnson anticipates that Horvitz will maintain the great effort he put into the public access show "Unscripted," which airs four days a week on channel 34. The program depicted Johnson as a moderator in a debate-style format with MCPS students as panelists. Horvitz also expects to continue Johnson's work on the middle-school cell phone policy. Johnson's resolution to the Board to consider allowing cell phone use in school without prior approval was never addressed, Horvitz said.

Horvitz has a number of personal causes she hopes to tackle once she officially becomes SMOB. Primarily, Horvitz has been concerned with academic eligibility requirements, which she believes are too strict and discourage students after they are declared ineligible.

Horvitz also foresees a reexamination of the county grading and reporting policy, which lacks uniform implementation across the school system, she said. Finally, Horvitz anticipates challenging the current loss of credit and R-rated movie policies because she finds that both rules should have exceptions.

As her July 5 inauguration nears, Horvitz feels apprehensive but confident in her abilities. "Everything the Board passes affects the students," she said. "Our voice must be heard."

Jason Meer. Jason Meer is a RISING SENIOR who needs to get more sleep. When awake, he finds time to facebook, watch SportsCenter and World Poker Tour, and listen to varied musicians from Chamillionaire to Sigur Ros to Kelly Clarkson. If you see a red-haired guy walking … More »