Before a large homecoming crowd, varsity football (1 – 3 – 0) lost to the Springbrook Blue Devils 0 – 21. Without many of their starters due to injury, Blair was unable to master Springbook's vitality, and committed several tackling errors throughout the game. 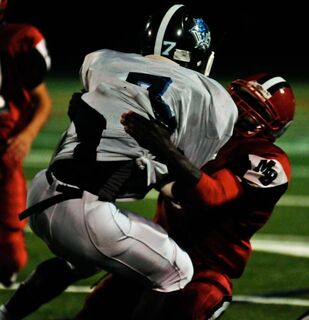 Photo: A Springbrook player lands on Blazer during a particularly rough play.

Photo: A Springbrook player lands on Blazer during a particularly rough play.

A noteworthy moment for the Blazers occurred when senior quarterback and captain Alex Egber threw a 74-yard pass to senior captain Andrew Gondor, who sprinted ahead of a Springbrook player for a touchdown four and a half minutes into the second quarter. Blair fans went wild, but the touchdown was rejected, as the refs charged Blair with holding. The play resulted in a third down for Blair and some leverage in Blue Devil territory, but the Blazers didn't produce touchdown opportunities for the rest of the game.

Though the Blazers exhibited self-assurance at the start of the game, the Blue Devils scored early. After four minutes and 40 seconds of the game, Springbrook junior Devon Pestano scored the first touchdown. Pestano scored both other touchdowns in the second and fourth quarters. The second Blue Devil touchdown came with four minutes left in the second quarter, and the third with only a minute and 47 seconds left in the game.

Photo: Two players crash during the final minutes of the homecoming game.

Photo: Two players crash during the final minutes of the homecoming game.

Despite both Springbrook touchdowns in the first half of the game, the first two quarters showcased impressive Blair defense, according to offensive coordinator Bryan Nance. "Defense was good in the first half," Nance said. "Defensively we're where we want to be." One defensive highlight was an interception by senior replacement corner back Jairo Fuentes. In addition, key player Abe Jarr was involved in almost every tackle of the first half.

Though the defense set high standards for the rest of the game, Blair offense struggled to create opportunities to snag a first down. "We never got into a groove, we couldn't get anything working," Egber said. The penalties Blair yielded in the first half also kept the Blazers from making significant progress. "Our own penalties killed us," remarked head coach Jeff Seals. 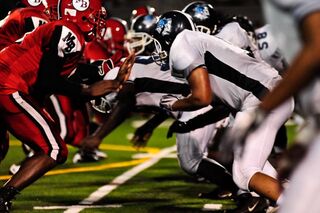 Photo: The two teams preparing to clash during the second half of the Sept. 25 game.

Photo: The two teams preparing to clash during the second half of the Sept. 25 game.

At halftime, defensive coordinator Earl Lindsay talked to the Blazers about their technical mistakes with an emphasis on tackling. "Do not grab," Lindsay stressed. "We can't afford mistakes," Nance added. The coordinators also discussed offense. "We've got to stick to our game plan [and] run the ball," Nance said.

Blair progressed at the beginning of the second half, as Gondor carried the ball to the 20-yard line. Elisee Francois temporarily replaced Egber as quarterback during this quarter because the captain had bruised his elbow just before the end of the first half.

The third quarter was a back and forth game. The Blazers lost the ball with a little under five minutes left, but gained control when Gondor intercepted the ball 53 seconds before the end of the quarter.

The Blue Devils had possession of the ball at the beginning of the fourth quarter, and Springbrook gained a first down after a fake punt that sent Blazers scrambling. During Blue Devil possession, both Gondor and Jarr pulled themselves out of the game due to cramping. Despite a sack made by senior Enyinna Getbait Onyewu that set Springbrook back on the 30-yard line, the Blue Devils sealed their win with a third touchdown at the end of the quarter. 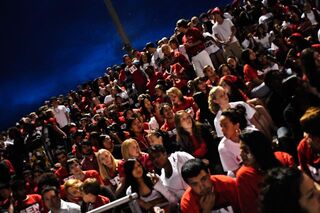 Photo: The student seating section is packed with spirited Blazers.

Photo: The student seating section is packed with spirited Blazers.

Overall, Blair's performance was plagued by errors throughout the game, according to Seals. "At the end of the game I told the boys we made a lot of mistakes. We tackled really poorly, grabbing instead of running through people," he said. "We've got a young team, but that's no excuse." Despite their slip-ups, Egber recognized that the team made progress by becoming more familiar with their plays. "We were more knowledgeable of what we were doing," he said.

Although they remained behind Blue Devils throughout the Homecoming game, the Blazers never lost their hunger to win. "The kids did not give up. We had injuries…they could've laid down, but they held on until the end," said Seals. Jarr agreed, and emphasized Blair's determination as particularly notable. "We never gave up on the game," he said. Despite the team's remarkable persistence, Gondor still recognized the need for improvement. "We need to work harder. We've got a good team coming up, and we need to step up our game," he said.