"If you don't like yourself, you're screwed," sophomore Ellie Musgrave says. Musgrave's words ring true for all people in all stages of life – particularly for the typical 21st century high school student with Internet access. 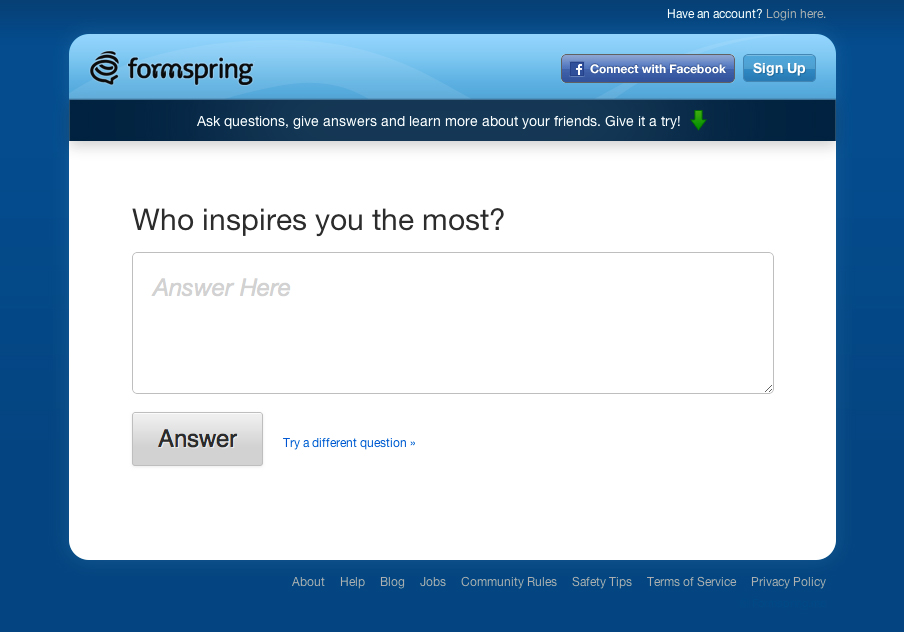 Photo: Upon entry, Formspring.me prompts all visitors to answer questions about themselves and start a profile.

Photo: Upon entry, Formspring.me prompts all visitors to answer questions about themselves and start a profile.

Lately, news stations have been buzzing about the suicide of Rutgers University freshman Tyler Clementi. After his roommate broadcasted a video of him engaging in gay sexual activity on the Internet, Clementi took his own life. Recently, the public has also associated a more specific Internet forum, social networking site Formspring.me, with the deaths of three other teens, including a 15-year-old in Massachusetts and a 17-year-old in New York. While the effects of cyberbullying might not be as drastic for Blazers, cyberbullying presents itself as a prevalent issue at Blair.

On 10-month-old social networking site Formspring, users set up profiles and either answer, ignore or delete questions that other people can anonymously post to their profiles. But many users abuse the anonymity of sending messages to others and take any opportunity they can to verbally attack their peers online. A survey conducted by I-Safe Inc., an organization that educates youth about Internet safety, says that 42 percent of kids have been bullied online, yet 58 percent of these kids have not reported these problems to any adults. Available to anyone active in cyberspace, Formspring has become an online canvas for verbal harassment and elevated cyberbullying issues in high schools.

Almost a third of all Formspring users are 17 or younger, according to The Dallas Morning News. With more than 40 million visitors a month and 5 million questions answered a day, Formspring provides the modern-day bully with many opportunities for attack.

Though over 16 million have signed on to Formspring, no two users deal with the same experiences online.

Junior Nika Lilley remembers that when she first joined Formspring, she was unsuspecting of any negative comments. "I kind of figured, ‘why not?'," she says. "It never really registered with me that people could say bad things and you never know who they are." 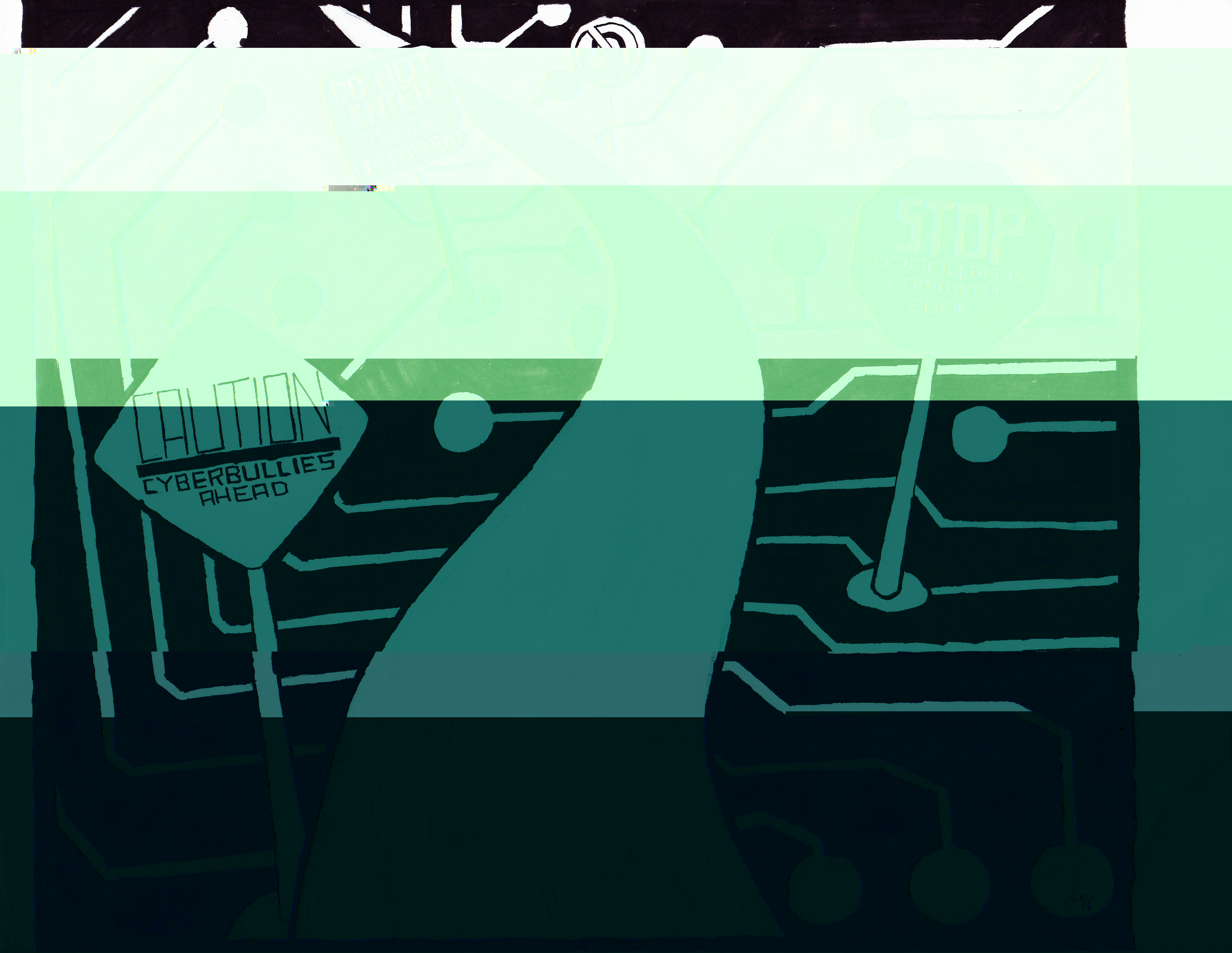 To Lilley, Formspring did not seem like the place for bullying. "I kind of expected people to ask actual questions, but some of them were really random and irrelevant," she says. "There aren't any life-changing questions."

Sophomore Vivienne Chen shared a similar mentality when she first signed up for Formspring. "I saw people getting Formsprings and it seemed interesting, so I tried it," she says. But unlike Lilley, Chen and Musgrave, who first heard of Formspring last winter, anticipated the offensive comments when they first hopped aboard the Formspring bandwagon. "I always expect people to get a lot of negative comments, but I didn't," Chen says.

The simple nature of Formspring has taken traditional schoolyard bullying to the next level. Accessible at any time, anonymous comments target cyberbullying victims directly, as opposed to face-to-face bullying which often involves more effort and arguably more courage from the bully.

It wasn't until three months after Musgrave set up a profile on Formspring that she started receiving hard-hitting comments. "It was a shock to me," she says. "They were really personal. I didn't think it would escalate to that level."

And, as Musgrave explains, cyberbullying is no less hurtful than in-person bullying. "With cyberbullying, there's so many ways people can get to you. It's always a prevalent factor," she says. "[With schoolyard bullying], you leave recess and it's gone."

Regardless of whether the person posting offensive comments personally knows the user, Musgrave reveals that all comments are painful to read. "The ones from people I actually knew really hurt me," she explains. "You could be having a really good day and then you get those comments and it can be really hurtful." 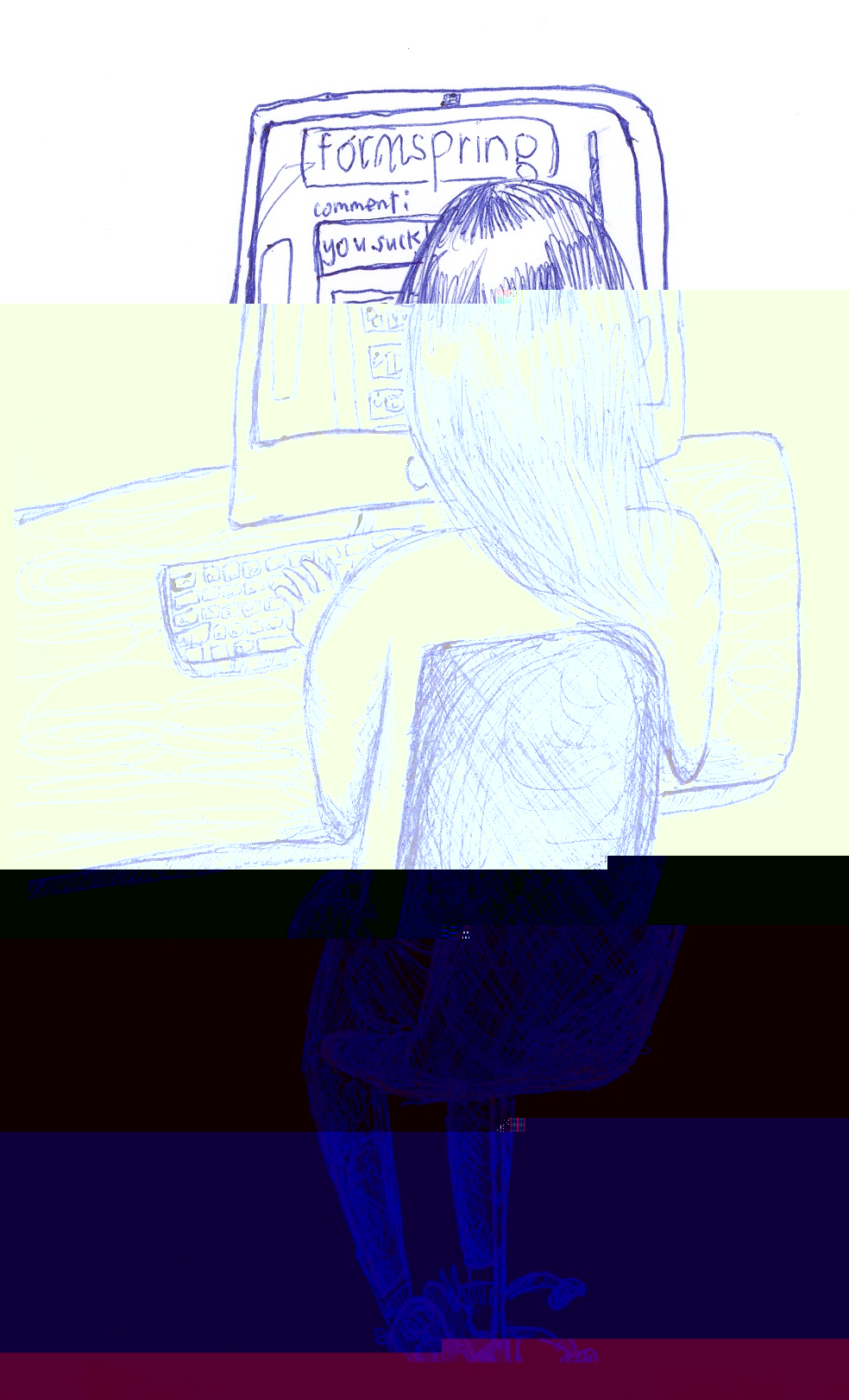 Photo: Cyberbullies take advantage of the option to anonymously leave comments on other users' profiles to harass others.

Photo: Cyberbullies take advantage of the option to anonymously leave comments on other users' profiles to harass others.

And for Musgrave the comments only got worse as time went on. "If I got one today, it would probably still affect me the same way - it's the same feeling in my stomach," she says. "When you're hit by something like that, it's the only thing that becomes apparent to you."

Lilley feels the comments were unexpected and eye opening. "I received a couple comments that were like 'no one believes your s***'," she says. "It never really occurred to me that someone would think of me that way."

Learning how to deal

Musgrave believes that in order to avoid further harassment, users should try to ignore harsh comments. "[Bullies are] going on the reaction instead of what you're actually saying," she says. "Like if someone yells, you'll be more focused on the yelling, not on the fire that's happening. You can't give them that."

Eventually, Musgrave found it necessary to seek the support of her family. Musgrave's mother, Juli Fuchs, played an important role in helping Musgrave deal with her cyberbullying situation. "One thing I suggested she do was to make a statement in her blog like 'because of negative comments, I'm taking out the comments box.'," Fuchs explains. "That's a statement of 'I know what's happening here. I'm not participating.'"

While it may have been necessary for Musgrave to eliminate her comments box, Chen and Lilley took less drastic measures in responding to insults. "I didn't respond so seriously," Chen said. "I think it's a good thing I don't care too much." Similarly, Lilley saw no need for adult help. "I may have mentioned it to a friend or two, but it was just to say, 'can you believe this?'" she says.

For all cases, Fuchs believes that communicating with adults always helps students overcome bullying problems. "It's absolutely, absolutely necessary to talk to someone when bullying happens," she says.

Resource counselor Marcia Johnson is not familiar with Formspring, but encourages students to speak up about cyberbullying. "We're trying to inform teachers and students. If you know someone that's doing the bullying, you have to report it and it will be dealt with," she says.

Despite the fact that Musgrave temporarily deactivated her Formspring, she has found that at its inception, Formspring was meant to be something other than a place for bullies to harass others. "I got a really good comment last week. It had to do with in jokes from bands I really like," she explains. "I just sat there and laughed - I said, 'this is probably what Formspring is for. Wow, this is nice.'"

Though to Lilley, Formspring might not be "that big of a deal anymore," students should still refrain from sharing too much personal information when online to avoid cyberbullying at all costs. "I wouldn't suggest against Formspring," Musgrave says. "Just be careful."