Swiveling in his chair and contemplating his typical weekend plans, Franklin Stallings chuckles and says, "Work." Since he was 16 years old, Stallings says, he can't remember a period in his life when he was not working.

At first, as a teenager, Stallings worked as a barber and a staff member at a recreation center. In his house and around his neighborhood there was no such thing as "sitting around," he says. "You were working for someone." As his dad worked as a college dean and his mother as a supervisor for a veteran's administration, Stallings noted that their jobs required much of their time. Stallings praises their work ethic for providing him a "great example" of hard work. 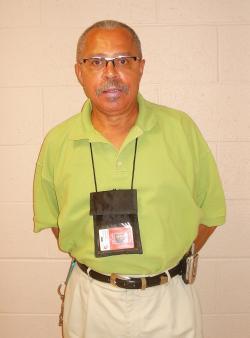 Following his parents' example, Stallings was a disciplined high school student. After graduating, Stallings was unsure what to pursue and enrolled in the Maryland Institute College of Art. A "B" student in high school, Stallings worked to become a straight "A" student in college, realizing that graphic design greatly interested him.

College, for Stallings, offered valuable experience and relationships. Stallings says that the friendships he made and the people he met from all areas and backgrounds were the best part. Before attaining his degree, however, Stallings was drafted into a daring moment in his life- the Vietnam War.

In Vietnam for one year, Stallings was a battalion sergeant stationed about five miles from the battle field. His battalion had to be ready to support the Medevac helicopters by refueling and supplying it. The Vietnam War taught Stallings a strong lesson, he says: "life is precious." In a twisted way, his dark experience in Vietnam taught him to value laughter. "Back then, there was a lot of sadness and the blues, and laughing would ease the pain, so I like to joke about things," says Stallings.

After returning from the war, Stallings finished school and graduated with a master's in Arts Publication Design. Searching for a job, Stallings settled for a fine arts teaching position at Walt Whitman High School. He recalls that teaching photography grew so much on him that he vowed to never quit. Stallings now has a real passion for the art. "I like suspending an image forever. You're freezing something in time, a millisecond. I like that," says Stallings.

Along with teaching, Stallings works for his freelance photography business, doing mainly public relations photography at events, conventions and other shoots, such as corporate portraits. "I never worked at one job, always had a minimum of two," Stalling says.

Through working hard, embracing diversity and serving in the Vietnam War, Stallings has cultivated a great sense of humor and a deep belief in discipline. His teaching style is a cross between "drill sergeant and comedian," he says. "The kids don't like my sarcasm sometimes. That's only because they can't handle the truth."