Standing up for sitting down

As I was waiting for my 3:00 bus last week during eighth period, I decided to park myself amongst the lockers on Blair Boulevard so I could talk with my friends. The instant we'd gotten comfortable, a security guard approached demanding that we clear the area. We nodded that we would and raised ourselves slightly off the floor, waiting until he had moved on to pester the next group of students to sit back down and resume our conversation. 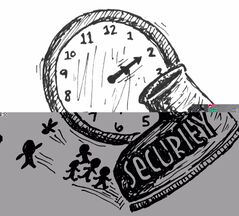 Photo:
Now I'm not the type of person who purposely undermines authority just for the heck of it. After a full day of school and just a few hours of sleep the night before, I was simply too lazy to move from perfectly comfortable, available seating. Plus, I had to stick around to catch my bus. Other students may need to wait for a teacher or friend who has an eighth period. It is ridiculous for security to force people to leave the school at 2:10 when they need to come back for something just 50 minutes later.

The next suggestion is to head for the library. Blair librarians, however, are understandably stern when it comes to disruption and often ask talkative students to leave. Thus, the library is not a viable option for those with no homework to do who just want to have a conversation with friends.

The security guard returned when he saw that we were still there. "Come on, people. Yes, I'm talking to you. Let's go," he said. In reply, we offered him our (I swear) legitimate reasons for remaining where we were: catching a bus, sports practice, etc. - we all had different responses. "Then go to the SAC," the security guard said. At least there's an alternative for students in our predicament.

But some students don't plan on seeing a teacher or catching their bus at 3:00; they just need a few minutes to hammer out the details of a later outing with their friends, or confirm the date of the group project they were assigned that day. Their business requires just a few minutes of discourse, which doesn't merit a full move to the other side of the school. There is no harm in allowing students to briefly socialize on Blair Boulevard before they leave.

Although I intended to stay until 3:00, I still felt like the security guard was unreasonably banishing me. Admittedly, there is no problem with hanging out in the SAC during eighth period; security at any school would want to keep an eye on students after the final bell and consolidating them in one place makes their job easier. But it is even more true that there's no reason to clear out Blair Boulevard. Students sitting by the lockers or on the benches aren't breaking any rules. We aren't being safety hazards. We aren't preventing the occurrence of any important event. We just want a convenient place to sit. Is that too much to ask?