On Nov. 9, Superintendent Joshua Starr and Student Member of the Board (SMOB) President Alan Xie hosted a formal Town Hall meeting at Quince Orchard High School. Students were encouraged to email or post questions on Twitter prior to the meeting, which took place from 10:53 to 11:33 a.m., during Blair's fifth-period block. County faculty and students could view the live broadcast on the event at the Montgomery County Public Schools (MCPS) website and its public television station, Channel 34. 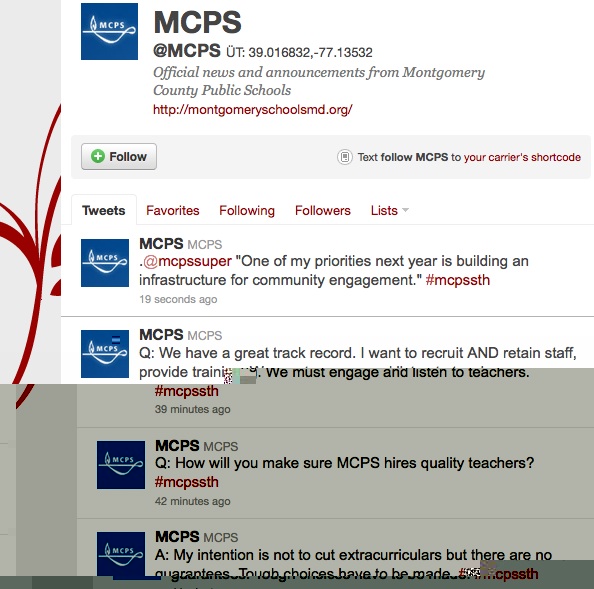 Photo: Students were encouraged to submit questions for the Town Hall meeting via Twitter or email. MCPS updated the feed during the live broadcast.

Photo: Students were encouraged to submit questions for the Town Hall meeting via Twitter or email. MCPS updated the feed during the live broadcast.

Blair Media Specialist Andrea Lamphier streamed the question-and-answer session in the Media Center, inviting students to participate in a "working lunch" in order to promote discussion in the school community. "It's a way to tap into and start building a greater sense of political awareness in students," Lamphier said. "It opens a safe political dialogue."

Discussion topics ranged from the increase in county enrollment, to concerns about classroom sizes, to funding for special education, magnet, music and art programs. Starr also addressed the likelihood of drug testing for student athletes, which is slim due to legal issues, and his reaction to the reinstated attendance policy and the digitalization of the classroom environment.

Resource teacher Jill Selman, whose fifth period National, State and Local Government (NSL) class attended the broadcast in the Media Center, said the Town Hall gave her students a chance to see democratic discussion at work. "It teaches students how to be an effective member of a democracy," she said. "The debate about the attendance policy helps them understand policy-making, because the school, like the government, has to choose what's best for the community as a whole, not what's best for the individual."

One of the main discussion topics was MCPS's expanding student population. Since 2007, county enrollment has increased by 9,000 students, a number that is expected to double over the next six years, according to an MCPS press release. Though class sizes have become less manageable for teachers, Starr said that student quantity should not affect educational quality. "I would rather have great teachers in a large class than place an average teacher in a moderately sized class," he said.

Selman, however, disagreed with Starr's stance on class size with concern to teacher productivity. "Maybe class size doesn't matter during the period, but after the bell rings, teachers have less time to do more grading and deliver more feedback. It cuts into the one-on-one communication between teachers and students, and affects us personally and professionally outside of the classroom," she said.

Starr briefly brought up the "digital divide," but Selman said that unequal access to online resources is a major problem that should have been addressed more thoroughly. "As teachers, we always try to use technology, but we don't want to put kids without computer access at a disadvantage," Selman said. "This might cause administrators reevaluate the cell phone policy and open up the possibility of using phones as educational resources in class."

Lamphier was pleased with the student turnout and said it was a good first effort for the Media Center. "With such short notice, I thought we had a quick turnaround, but in the future, I would like to put more emphasis on publicity and getting the word out about these kinds of broadcasting events," she said.

To watch the video archives of this meeting, or to see the first Town Hall meeting, which took place on Oct. 12 at James Hubert Blake High School,
click here .