On Dec. 7, Superintendent Joshua Starr proposed his first MCPS operating budget before members of the Board of Education (BOE), Montgomery County Education Association (MCEA), Montgomery County Council and Maryland state legislature. The event also drew a crowd of administrators, teachers, parents and students from across the county. 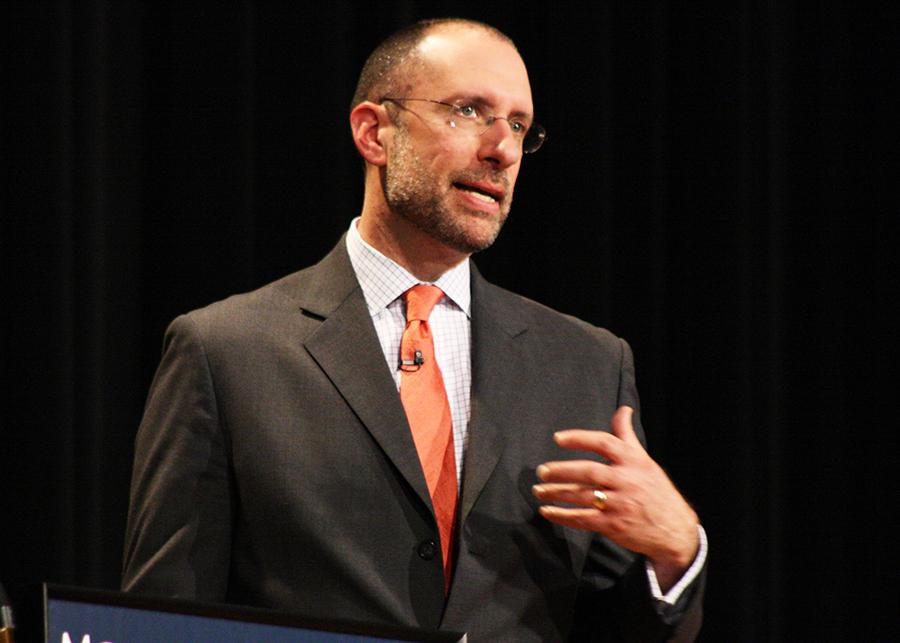 The proposed Fiscal Year (FY) 2013 budget, which will dictate budget allocations between July 31, 2012 and June 1, 2013, includes greater salaries and benefits for teachers and departmental changes in the Central Office. Starr is recommending a $2.13 billion budget — a $41.4 million (2 percent) increase over the FY 2012 budget and the smallest requested increase in the proposed budget in 12 years. According to Starr, the increased funding will account for a projected growth of 2,250 students in MCPS next year.

Starr began his presentation by discussing what he has learned about MCPS through "Listen and Learn” events, student town hall meetings, book clubs and school visits. "I developed a pretty good impression of MCPS and a good idea of what makes us tick,” he said to the audience. Starr described his goals as superintendent in terms of his ultimate mission for MCPS students. "My vision is to have the smartest kids and the greatest people,” he said.

Principal Renay Johnson, who attended the meeting, said that she enjoyed the innovation that Starr brought to the table this year. "Dr. Starr has a new energy and new vision for the school system,” she said. Johnson is relieved that Starr does not want to cut school-based positions; according to Johnson, although Blair is the largest school in the county, it faces the setbacks of having the same number of attendance, Media Center and IT systems specialists as some of the smallest high schools in the county.

Starr's operating budget has garnered support from various officials. "It was a smart ask. He's not asking for a huge increase. It's more likely that the budget will be funded,” said MCEA president Doug Prouty. "He was smart in not trying to add a lot.”

However, the BOE and the County Council must both approve the proposed budget before it goes into effect. According to Johnson, the entire budget is usually passed by the BOE but takes longer to get approved by the County Council, which must consider allocations to county departments other than education. Johnson said that this is what usually causes teachers to lose benefits and may be a concern in the budget discussion.

Marc Grossman, Blair government teacher and MCEA representative, also predicts friction when the budget is up for a vote by the Council. Grossman said that the $21 million surplus that MCPS retained from FY 2011 will make the Council more reluctant to accept the budget. "The County Council is very skeptical of the school system,” he said.

During this economically trying budget season, the MCEA has organized several town halls for teachers to voice their concerns on education funding to legislators. On Dec. 12, teachers from District 20 schools gathered in Blair's media center with Maryland State Senator Jamie Raskin, State Delegate Sheila Hixson and State Delegate Tom Hucker. The delegates answered questions on school funding at the state level, and teachers shared personal stories about how the financial situation has affected their school and personal lives.

Raskin emphasized the need for greater collaboration between the Council, the BOE and the school system in putting forth a successful budget. "The money from the state is given to the county government. We don't tell them how to spend it. The County Council and BOE work it out together,” said Raskin. "There is division between the Council, the Board and the County Executive. We need to make sure that the county is speaking with one voice.”

The BOE will hold two operating budget hearings on Jan. 11 and Jan. 18 and will act on the budget on Feb. 14 of next year. The budget will then be presented to County Executive Ike Leggett and the County Council on Mar. 6 and will be approved by the Council on May 17. Final action to adopt the budget will take place on June 14.