Starring on the soccer scene

Freshmen playing on varsity score alongside vets with vigor and victory

Beads of sweat have barely crossed her forehead as her gloved hand wipes them away, keeping her field of vision and focus clear. Time seems to stop as Blair clings to a 1-0 lead, and any lapse - mental, physical, emotional - could shatter the Blazers' chance to beat rival Walter Johnson. Suddenly, an opponent separates herself from a defender for a breakaway. But by the tip of her outstretched foot, freshman goalkeeper Lena Meyerson saves the shot and the game, giving the varsity girls' soccer team the championship in Walter Johnson's Big Train tournament, and handing the host their first Big Train loss ever. 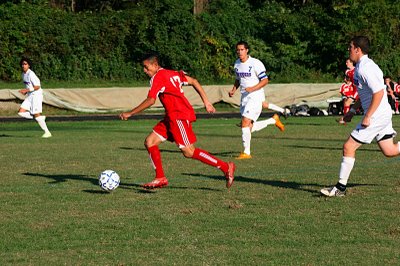 This tournament, in which Blair emerged triumphant, was the first of multiple varsity games that would star Meyerson as the starting goalie for a team with a solid 12-1 record and a heap of team spirit. Meyerson is part of a select pool of players on Blair's victorious soccer teams who play as varsity athletes in their first year of high school, holding their ground against older players with the advantage of experience and size. Although it is these players' first year at Blair, they have proven themselves as assets, assisting their older counterparts in pivotal positions across the field. Freshmen earned an irreplaceable experience playing on teams in a golden season for Blair sports.

Being allotted a spot on varsity at a freshman level is more than just playing up - it's about complimenting the entire team. And no one makes varsity unless they can help the team, says girls' varsity coach Robert Gibb, who called this season the best he's seen. "All of this year's freshmen are all around good players and fit in positively with the team," Gibb explains.

But fitting in doesn't come without pressure. Left midfielder Jorge Pacheco and sweeper Dominic Ventimiglia represent the class of 2012 for boys' soccer. The boys, who played together at Eastern Middle School, say joining a squad of upperclassmen was a serious commitment, both physically and mentally.

Pacheco and Ventimiglia both feel not just the duty to contribute to the team's success, but also to prove themselves to the veterans on the field. "I feel the need to step up as a starter and play well the whole time," Ventimiglia says. "I can't make mistakes."

That fresh, gritty determination translates to success on the field. "Their persistence and guts is striking," coach Adrian Baez says. "Dominic plays every minute at all the games and Jorge is on hyper-drive."

Their intense efforts have not gone unnoticed on the score board, either. "It's been a complete turnaround from last year," Baez says. He feels the freshmen on his team were a "big plus" - and that Pacheco came to the team "as sort of a gift from the soccer gods."

Performing well when the whistle sounds has become a necessary routine for these freshmen. Whether influenced by their culture or outside factors, they have been exposed to multiple angles and skill levels in soccer.

Ventimiglia and Pacheco have trained for years with highly competitive travel teams - since third grade, for Pacheco. But besides incredible athletic skill, Baez is most impressed by their character. "The maturity they have brought from a ninth grade level is amazing. They play with the maturity of seniors," Baez exclaims. 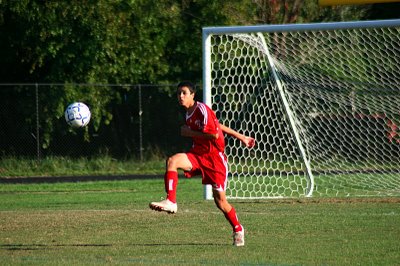 Kicking and defending across the field is no easy feat. Most freshmen experience the same feelings as they go on the field: numb with nerves as they start, but comfortable as time carries on. "At first I felt the pressure, because the varsity team was so experienced," Meyerson says. "I didn't feel comfortable playing at that level, but I've gotten used to the high quality of play."

With both teams boasting winning records, these athletes' first Blair seasons have represented a delicate balance between challenge and reward.

Meyerson found the benefit of playing with seniors outweighed any disconnect she felt from her peers on junior varsity. "I had a lot of fun playing really good soccer," Meyerson says. "The season's been fabulous season and plus, I get to represent Blair in a positive way."

Ventimiglia considers it an honor to play with the seniors. "They just accepted us and we're all real good friends," he says.

Pacheco acknowledges that he struggled at first to compete at varsity level against upperclassmen who are stronger, faster and bigger. However, he believes his skills have improved greatly through his experience because he can now stand better against those more adept players.

Standing better may be an understatement for Pacheco, who scored the game-winning goal in double overtime against Northwood. On Oct. 21, a cold Tuesday night, with only 30 seconds left in the game and the score tied at one, the Blazers were engaged in their last play when senior Mikey Funes gave a through-ball. Like a bullet, Pacheco ran for it. "I don't think I ever ran that fast in my life," Pacheco says. Approaching the net, Pacheco faked out the goalie and scored, winning the game.

Whether a gift from the soccer gods or not, Pacheco and his fellow soccer-playing freshmen have had a significant impact on this season, and each looks to improve for the 2009-2010 school year.