The thundering cheers of a thousand high school students electrify a packed stadium as six robots zip around a track in the center of a scene described by junior participant Karen Luk as "hell in a stadium." The timer ticks down to zero, and the stadium explodes into an even louder uproar as the robots make their final lap and cross the finish line. 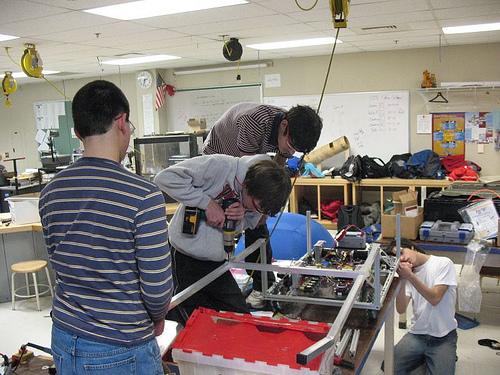 The event is the For Inspiration and Recognition of Science and Technology (FIRST) Robotics Competition (FRC), an annual international event that began in 1992 and that attracts more than 1,300 participating teams and 12,500 students from around the country. FIRST plans a different game every year and gives teams six weeks notice to design, construct, program and test a robot tailored to accomplish the specific objectives, according to the FRC web site. For this year's FRC, named the FIRST Overdrive, teams were required to manipulate a 40-inch diameter, seven-pound trackball over and under overpasses while racing around a track.

For the Blair Robotics Team, 2008 has certainly been a year of firsts. After three years out of the spotlight, the team rocketed back into action by qualifying for the FRC semifinals at the Chesapeake regional competition and winning the Delphi "Driving Tomorrow's Technology" award for their use of advanced technologies at the New Jersey regional. Members and mentors dedicated four hours on weekdays and 12 hours on weekends during the build process, providing the nuts and bolts of the team's newfound success - a progress that the team will continue to build on in future years.

The Robotics Team spends most of the year concentrating on the annual FRC by training in mini-robot competitions. During the fall, the team purchased, constructed and programmed small robots designed to pick up ping-pong balls and place them in goals. "Although none of the robots were awesome at picking up the ping-pong balls, we all had lots of fun doing it, and hopefully people learned some valuable lessons about how a competition worked," captain and senior Katherine Bertaut says. 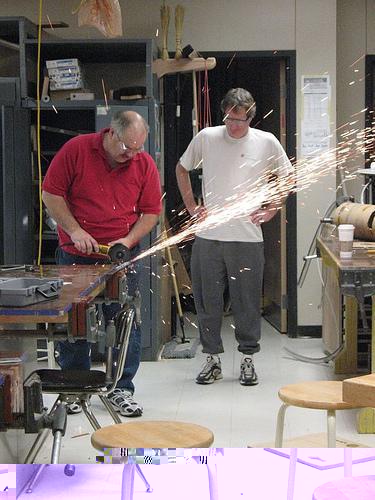 Photo: Sparks fly as mentors help the team cut off material for the robot. Photo courtesy of Katherine Bertaut.

Photo: Sparks fly as mentors help the team cut off material for the robot. Photo courtesy of Katherine Bertaut.

The FIRST Overdrive kicked off on Jan. 5, marking the beginning of a hectic six-week design and build season. Although restricted by tight guidelines and schedules, the Blair Robotics Team immediately shifted into gear, first developing a functional robot design and then splitting up into specialized groups to bring it to life.

The programming team developed codes for remote controlled and autonomous modes of the robot, according to senior Ryan Waldman, while the specialty team, led by sophomore Ben Shaya, constructed scissors and forklifts to manipulate the trackball. The electronics team had to hook up the main operator interface, wire the robot and sensors and connect it to the "robot controller" ― the brains of the robot. Meanwhile, the drive team built the chassis, the main frame of the robot, and the drive train to match the programming, according to Bertaut. Several members were also assigned to take pictures, write blog posts on their web site and scout for information on all other robots at actual competitions. "Six weeks might seem like a lot of time but we're always extremely crunched for time," Bertaut says. "If we don't all put in our part, the robot would never get done."

Many mentors, often the parents of members of the Robotics Team, contributed just as much time to the project as the students by supervising the workshop, giving engineering advice and troubleshooting student ideas. Mentor Cornelia Kagan, mother of junior member Lukas Kagan, spent nearly 20 hours a week supporting the team during build season.

In addition to supervising students in the workshop, mentors support the Robotics Team through corporate fundraising; the initial registration fee for a single team to FRC, which includes only a basic kit of parts, is $6,000, according to Bertaut. Throughout the build season, the Robotics Team required nearly $4,000 more for parts to complete their robot. "We're approaching lots of small local companies for support," Cornelia Kagan says.

At the end of build season on Feb. 19, the team shipped off their 120-pound robot in a crate to Trenton, NJ. Unable to modify or even see their robot except for a few ten-hour-long "fix-it" windows, the Robotics Team had nothing to do except wait for their two FRC regional competitions in Trenton, NJ and Annapolis, MD.

The FIRST Overdrive regional competitions are three days long with practice time on Thursday, qualification matches on Friday and elimination matches on Saturday. Teams are randomly placed in three-team alliances, and two alliances play each other in matches lasting two minutes and 15 seconds. "There is a lot of pressure at the competitions since you're surrounded by so many other good drivers," Eric says.

From Feb. 28 to March 1 at the New Jersey Regional, the Blair Robotics Team made it to the quarterfinals, where they snagged 12th place out of 63 teams. They were also awarded the Delphi "Driving Tomorrow's Technology" Award for their use of innovative technology such as mecanum drive, a wheel system which gives their robot the ability to move freely in all directions.

Two weeks later from March 13 to 15 at the Chesapeake Regional in Annapolis, the team continued to put the pedal to the metal. Unfortunately, the squad had to carry several matches by themselves to compensate for weaker allies. Their luck continued to plummet when the device that controlled their robot's forklift broke mid-match. Although the team was unable to fix the problem in time for the next match, they continued to play as defense, slowing opposing robots down. "Things just didn't go right," Bertaut says. "With our robot partially disabled, we couldn't score any points." In the end, the team placed 41st out of 60 teams. 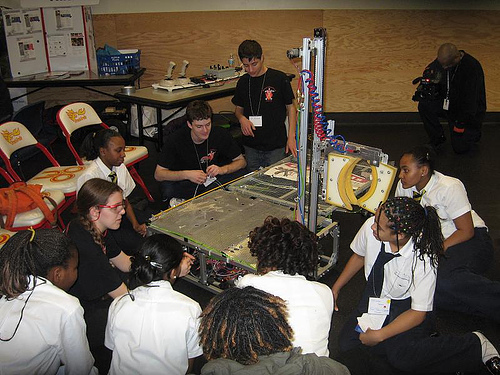 Photo: Members present their 2007 robot at the Young Women's Conference on Non-Traditional Careers at The University of the District of Columbia. Photo courtesy of Katherine Bertaut.

Photo: Members present their 2007 robot at the Young Women's Conference on Non-Traditional Careers at The University of the District of Columbia. Photo courtesy of Katherine Bertaut.

Regardless, the team's performance remains much stronger than that of years before. Due to low funding, they were unable to compete in 2005 and virtually started from scratch to prepare for the 2006 FRC. But the team performed very poorly, earning 63rd out of 64 teams; coincidentally, the team in 64th place happened to be disqualified. Blair managed to gain some speed in 2007, scraping together a decent robot, but not in time for the competition. However, the Robotics Team managed to win fourth place out of 20 teams at Battle O'Baltimore, a similar summer robotics event that they plan to attend again this year.

Besides dedicating much of the year to competitions, the Robotics Team also spends time educating young adults. Members of the team attended the Young Women's Conference on Non-Traditional Careers at The University of the District of Columbia on March 8 for the second year in a row. "We want to educate and get other people interested in what we do," Bertaut says. "We hope to get others involved in robotics and FIRST as well."

In the future, the Robotics Team would like to concentrate even more efforts towards educational outreach. "It hasn't exactly been the best couple of years for outreach as we've been too busy growing and solidifying the team," Bertaut says. However, given their performance this year at FRC, the team appears to be ready to take on the task.