Local politician Aaron Klein spoke to about 15 Young Democrats about his upcoming campaign for the Maryland House of Delegates, as well as his intended policies as a potential representative of District 20, today at 3 p.m. in room 134.

Klein, who has worked for Sen. Paul Sarbanes (D-MD) for five years as the Chief Economist on the Banking, Housing and Urban Affairs Committee, named smart growth and the establishment of the Inner Purple Line as top priorities in his campaign. "We need to make [the Purple Line] happen," he said. "The money that has been going toward the Inter County Connecter should be going to the purple line." 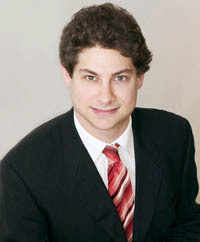 Photo: Aaron Klein is running for a seat in Annapolis as a Maryland State Delegate representing District 20.

Photo: Aaron Klein is running for a seat in Annapolis as a Maryland State Delegate representing District 20.

Klein also emphasized his goal to "create one Montgomery County" where "equal resources and equal treatment" are spread across all areas of the county. "Together is the only way to get fair and adequate treatment in our area," he said.

A 1994 Blair graduate and self-proclaimed "magnet geek," Klein discussed the importance of implementing new policies in MCPS. "You are the future," he said after naming education as one of his top priorities. "You need to be taught what it means to have a credit card. You need to know what interest rates and checking accounts are."

In a question and answer session, Klein first stressed the importance of affordable housing. "It's impossible, if you're young, to afford a house around here," he said. "We're going to go backwards if it's not fixed."

Klein distinguished himself from other candidates in the District 20 race with his background as a former MCPS student. "I grew up here," he said. "I'm the only candidate in the area that went to MCPS, and it's a little bit different when [candidates] talk about Blair and it's your school."

With five years of work under Sarbanes, Klein feels that he has the experience and confidence necessary to serve as a delegate. "I have legislative expertise that nobody else has," he said, referencing his work on Sarbanes' banking committee. "You want to get someone with my background, expertise and ear to the ground."