On the third show of their U.S. tour, State Radio rocked the crowd

The upper deck of the 9:30 club is jam packed while the lower half is just as crowded, filled with die-hard fans. The neon purple lights start to shine and the crowd begins to jump, knowing that in a matter of seconds, State Radio will fill the stage with their infectious blend of rock, punk and reggae beats. State Radio cured the crowd of their anticipation on Oct. 6 with a full-throttle performance, completing every one of their fans' fantasies.

On the third show of their U.S. tour, State Radio rocked the crowd at the 9:30 club, playing songs off of their new album "Year of the Crow" and old time favorites like "Camilo."

State Radio's opening act was Zili Misik, a talented female band. Zili Misik's music is one of African rooted beats with smooth harmonic melodies. Throughout most of their performance, the band played various types of drums and African rooted instruments accompanied by the saxophone. The group served as the focal point for the audience's energy in preparing for the main event. 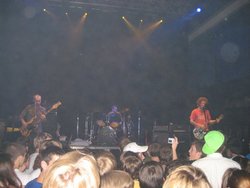 State Radio's opening song "The Waitress," set the tone for the rest of the concert - crowd mosh pits and energetic fans. State Radio's authentic renditions and their vigorous energized performance brought out the best in their music in a prolific show.

Throughout the concert, State Radio incorporated their opening act and special guest drummer, Jeremy Vest, into their performance. As soon as he entered the stage, it was easy to spot that this black curly-haired drummer from Massachusetts was goofy, but oh so talented on the drums. Vest made his debut drumming to "Omar Bay," a slow paced, politically charged song. Despite its usually dawdling tune, Vest's drumming made this song stand out and rock. He also brought his talents to the stage in "Time Served," where he enticed the entire crowd into bobbing their heads from left to right throughout the song.

State Radio continued to let others shine in the spotlight when bringing Zili Misik back on stage to feature in "Sudan" and "Rash of Robberies." Zili Misik brought flavor to each song by adding their African rooted music style.

By the time the fifth song came around, there were at least a dozen imprmptu mosh pits. Although crowd liveliness usually makes the performance more interactive and unique, in this case, it took away from the overall performance. These mosh pits and the crowd's rowdiness combined distracted the concert overall.

State Radio played a handful of songs from their new album "Year of the Crow," stirring up even more excitement. "CIA," a song about communist paranoia, made the crowd jump until the last chord on lead guitarist's Chad Stokes guitar was plucked. "Sudan," a more slow-paced song equipped with progressive political ideals, grabbed the attention of the audience immediately, helping shift away from the crowded mosh pits and overall rowdiness.

To end the performance, State Radio encored with "Good Graces." The applause and cheering lasted for so long that the band decided to play one last song, "Rushian," featuring catchy lyrics and beats, serving as the perfect song to bring the concert to a close.

State Radio's performance was a mere hour and a half long, serving just enough time to play an acceptable amount of older songs, but still leaving enough room to promote the new tracks off of "Year of the Crow."