Local community activist Jamie Raskin, a Democratic candidate for State Senate, from District 20, spoke to about 40 students last Thursday, Mar. 9, in room 168 at 2:10 and 3:00. The event, coordinated by SGR, provided a forum for discussion on Raskin's campaign as well as his work as a constitutional law professor and public interest attorney.

Raskin, who is challenging 19-year incumbent Ida Ruben in the upcoming Democratic primary, advocates a progressive agenda that he feels has been absent on the local and federal levels over the past two decades. "I'm going to try to do what the federal government is not doing," he said. "I wanted to get off the sidelines and run for office."

The candidate highlighted the changes he felt he would bring to the table as a State Senator—namely, a cleaner environment, better funding for education and the abolition of the death penalty—and encouraged students to get involved in issues about which they have strong feelings. "If you take a look at history, a lot of the most important changes were made by kids not much older than you," he said. "We need your energy and your optimism and your enthusiasm to make change." 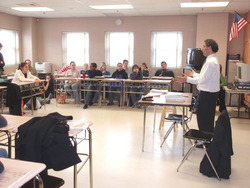 Raskin also discussed his work on the First Amendment as a law professor of constitutional law and a public interest attorney, mentioning his specific expertise with students' rights. His 2003 release of "We the Students," highlights student constitutional rights, and was published after Raskin represented BNC in a censorship case several years ago. "It's all about the rights of students in public schools," he said of his book. "The high schools… are just trampling students' rights."

Among several educational concerns, Raskin brought up the No Child Left Behind Act, which he describes as "a better description of [the federal government's] military plan than their educational plan." He also advocated a more cooperative relationship between public and private schools. "I want the universities and the colleges to be much more engaged with the high schools and junior highs and elementary schools," he said.

In a question and answer session, Raskin criticized Ruben for her unprogressive votes in the State Senate. "I was marching against the Iraq war at the time [that Ruben was signing a pro-Iraq bill]," he said. "Are you going to elect people who stand based on principles, or someone who stands based on what's popular at the time?" He also discussed what he felt were two unproductive decades in the State Senate. "Ida Ruben was ranked on the top 10 least effective incumbents. Sometimes you're bringing home the bacon and sometimes you're not."

Raskin encouraged students to get involved in his campaigns for the upcoming primary elections. "Politics is exciting business," he said. "And none of the events in this campaign are going to be boring. You can make not only a difference, but the difference in winning this race."