The outrage of thousands of protesting people in the northern African nation of Tunisia came to a head last week with the flight of their president to Saudi Arabia. Protests and riots over unemployment, high food prices, corruption and repression that began in December finally forced President Zine El Abidine Ben Ali to go into exile. The abrupt end of Ben Ali's 23-year rule is being called the first Middle East revolution since 1979. Now, echoes in favor of revolution have reached beyond the streets of Tunis to international blogs as well as internet and television news sources. Although the end result of these events is unclear, its implications are nonetheless fascinating and crucial to watch. 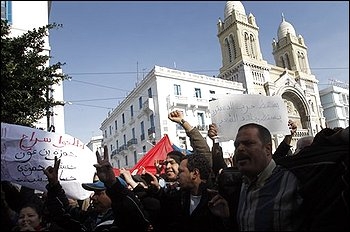 The largely sectarian-motivated protests, fueled by a variety of national issues in the midst of a corrupt government, are spreading to other autocratic Middle Eastern countries and sparking new protests. In Egypt, Mauritania and Algeria combined there have been at least six separate cases of self-immolation, in which a person sets themselves on fire out of protest to government policies. The incidents are believed to be inspired by the protest of Mohamed Bouazizi, 26, whose self-immolation in December set off the subsequent chaos in Tunis. Furthermore, Lebannon's delicate national unity government collapsed just last week.

Tunisian Prime Minister Mohamed Ghannouchi announced that the country would hold elections within 60 days that would be controlled and monitored by an independent election commission. In addition, he announced the end to a ban on the activities of human rights groups, and the liberation of political prisoners.

While the success of protesters has caused concern amongst the governments in neighboring autocratic countries, it has also provided hope for democratic movements in those countries. Though both George W. Bush and Barack Obama have called for the expansion of democracy in the Middle East, and Obama has expressed support of democratic elections there, we still have not seen how diplomatic relations with new governments will ensue when the old dictators had U.S. support. As protests continue, the death toll in Tunisia has reached at least 78. At the same time, the effect that events in Tunisia will have on other countries in the Middle East is uncertain. In the meantime, it's important to tune in to Tunisia, and keep a close watch on what could be an event that initiates major, never before seen change in the Middle East. .