Staying true to ideology and identity

Where only first names appear, names have been changed to protect the identities of
sources.

For Jane, a junior, faith was simple. A Baptist her whole life, Jane had a pastor for a grandfather and went to church every Sunday.

She found comfort in her belief that religion was black and white, that lifestyles and choices were either right or wrong. Premarital sex was wrong. Abortion was wrong. And homosexuality was most certainly wrong. But three years ago, Jane began to wish that there were room for a moral gray area in her faith when she realized that she, herself, was gay. 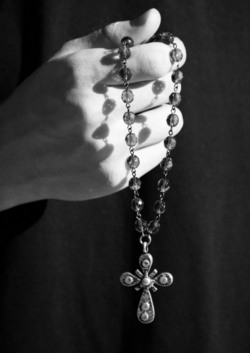 Photo: Forty percent of gay Americans say they practice religion, the most common being Catholicism, according to the Gay and Lesbian Consumer Online Census.

Photo: Forty percent of gay Americans say they practice religion, the most common being Catholicism, according to the Gay and Lesbian Consumer Online Census. Photo courtesy of Hannah Rosen.

While the 2004 election turned issues like gay marriage into questions of faith and churches continue to debate homosexuality within their own ranks, the Gay and Lesbian Consumer Online Census estimated in 2003 that close to 40 percent of gay Americans practiced a religion. For the handful of gay and bisexual Blazers who have joined this national trend, reconciling sexual orientation with faith has meant a confusing and painful journey to self-acceptance.

When she first began to realize she was gay, Jane was unable to accept it. She believed that homosexuality conflicted with her religion and imagined that her devoutly Baptist family would feel the same.

Jane had grown up accepting the strongly anti-gay sentiment that was rooted deeply in her family's religious convictions. It was for this reason that she did not come out in eighth grade, when she first realized she was gay. "I thought that something was wrong with me," Jane explains. "That was what was taught to me. In my family, things like that were forbidden."

Although Robert, a former 2005 senior and a Baptist, never shared his family's religious beliefs on homosexuality, he says that they were a consideration for him in coming out. Before letting his family know that he was gay, Robert's primary fear was that his mother's belief in the teachings of Rastafarianism, a sect of Christianity that views homosexuality as sinful, would cause her to reject him. "I was so afraid of what she might think," he says. "I just kept hiding it deeper, even though it was eating me alive."

This internal conflict is a reality for many gay and bisexual teenagers struggling to fit in socially, according to Richard Lindsay, the religious liaison for the National Gay and Lesbian Task Force. "Coming out is more difficult for teens than adults in part because life for a teen is more complicated already," he says, adding that for religious teenagers, the duality is even more evident.

It was in part because of religious pressure that Mike, a senior, chose to wait three years before coming out to his family. A Christian Apostolic, Mike has always viewed religion as one of the most integral parts of his life: He goes to church three days a week for prayer and song and has practiced the faith since birth.

Like Jane, Mike grew up in a religious environment where homosexuality was unquestionably taboo. Although Mike sometimes wonders if his church is right on the matter of homosexuality, his confusions stem more from his own faith than from his church's. Every Sunday, Mike's pastor begins his weekly speech against homosexuality, making it clear that the church views being gay as "not the right way to go," and every Sunday, Mike leaves the congregation before the preaching begins.

Coming clean and coming out

Although she believes that her church would disagree with her lifestyle, Jane sees her church's teachings as tiresome rather than upsetting. "To hear the same preaching about how wrong homosexuality is, it's annoying," she explains. "I've heard it all before." Two years ago, Jane faced the same choice as Mike and came to the same decision: Although her mother learned that she was gay when a family friend saw Jane and her girlfriend together, she has yet to come out to her religious congregation.

Initially, Jane says, her mother was furious. "She was yelling and cursing at me," Jane says, adding that while her church's views on homosexuality are a mere annoyance, her mother's were hurtful. "I was upset — because she didn't accept it, but also just because I was so shocked that she would talk to me like that!" Soon, however, Jane's mother moved into denial, and now, Jane and her mother no longer discuss her sexual orientation. "It still bothers me, but I've kind of moved past it," she says.

Although Robert says he always knew on some level that he was gay, his fears about breaking the news to his mother kept him from coming out until his junior year of high school. "[But] once she found out, I didn't have anything to hide," he says. "It was like this metamorphosis; I had gone into a cocoon, and I was overwhelmed with emotion, but I came to grips with it."

The day his mother found out, Robert watched her go from denial to anger and finally pack a bag to spend the night with a cousin. When she returned, though, their relationship remained unchanged. "She just didn't want to accept that it was true," he explains, adding that he understands that the admission "wasn't an easy thing to accept." Although he was upset by his mother's reaction, Robert tried to view the situation from her perspective. Rather than getting hurt or angry, he continued to hope that his mother would eventually "come around."

Robert believes his mother's reaction was largely due to her belief that the rest of her family — also strongly religious — would view his sexual orientation as a failure on her part. The rest of Robert's family, however, has accepted that he is gay, even if they don't entirely approve of it. "They wish it was different, but they don't dwell on it," he says. "They know that there are still other parts to me." Realizing that her fears were unfounded, Robert's mother has gradually moved from denial to discussion, which Robert views as an important step forward in their relationship.

Despite his initial concerns, Robert says that the members of his church view him in the same light as they always have. In turn, Robert goes to church whenever possible and studies the Bible on his own. "I still see myself as a son of God," he says.

Belief in God is a constant for Jane as well. If anything, the realization that she is gay has prompted Jane to spend more time reading and understanding the Bible, partially motivated by the controversy within the clergy over homosexuality.

Around the globe, religious and political figures alike have been locked in a fierce debate over the ethics of homosexuality: Faith is at stake, and the implications far-reaching. Even as this conflict garners international headlines, its repercussions continue to echo through local congregations.

According to Steve Pettit, the head pastor of Derwood Bible Church, a local non-denominational church, homosexuality and Christianity are in conflict. Pettit believes that the Bible views homosexuality as a sin, equating it with lying.

However, to Stanley Dubowski, head pastor of St. Hildegard's Church, an inclusive Old Catholic church in Arlington, Virginia, being both gay and Christian represents no contradiction: Dubowski has been openly gay since before his ordination. Dubowski says that under Old Catholicism, homosexuality is not an issue. Dubowski's parish is "mixed," half gay and half straight, and he explains that Old Catholicism is "accepting of people as people." "I think that a lot of mainstream Christians inflict way too much guilt about this," Dubowski says, adding that he believes that commonly cited Bible passages on homosexuality are misinterpreted.

Dubowski feels that while some Bible verses have a clear objection to the ritualized homosexuality of the ancient Romans, the Bible has "no real direction one way or another" on the issue of homosexuality as a
whole. And while homosexuality
remains a point of contention for religious leaders, both Dubowski and Pettit continue to stress that a congregant's sexual orientation should not bar him or her from attending a church.

Still, Jane says, her relationship with her church has been irrevocably changed. She no longer goes to church every Sunday and feels out of place when she does. "It just doesn't feel right anymore," she says. "I just feel awkward there."

Confused and frustrated by what she saw as the impossible standards of the church, Jane says that she began to question her faith after initially realizing that she was gay. "At one point I wondered, why should I even bother — everything seems to be a sin," she says. "If you're not the perfect Christian, they condemn you."

Soon, however, Jane realized that she objected not to the underlying principles of her religion but instead to the practicalities. "I think maybe the Bible needs an update," she says, citing lines in the Bible objecting to women wearing pants as examples of outmoded teachings.

For Johnny, a Catholic junior who realized that he was bisexual in middle school, the confusion has always been more pervasive. "I'm following a religion that teaches that, no matter what, I'm going to end up in hell because I'm not straight," he says. In recent years, Johnny has started to question some of his long-held beliefs about Catholicism, among them his belief in the infallibility of the Pope.

Reconciling his life with his faith has not been easy for Johnny, but he has reached the conclusion that the way in which he lives his life is not a sin. "I know who I am in my life," he explains.

Robert, too, has developed a strong sense of identity. He chooses to practice his religion alone rather than in an organized setting, partially because of what he views as the judgmental nature of some churches. "I can't help who I am," he says. "We all sin, and who's to say that one sin is greater than another?"

Rather than concerning himself with the question of sin, Robert strives only to remain true to himself in both his religion and his life. He explains, "I'm just being who I am. Be who you are — that's all you can do."