Early this week, Pepco announced that about 300,000 Maryland and Washington, D.C., residents lost electricity as a result of the storm on Sunday. The District Department of Transportation (DDOT) amassed 300 accounts of tree damage in the D.C. area. 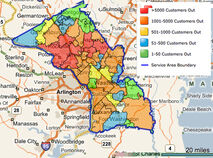 Photo: Hundreds of thousands of residents in Maryland were left without electricity days after Sunday's storm.

Photo: Hundreds of thousands of residents in Maryland were left without electricity days after Sunday's storm.  Photo courtesy of Pepco.

Montgomery County Public Schools (MCPS) reported that 65 of its facilities were without power, although this number dropped significantly by mid-week. Bob Hainey, Pepco's manager of media relations, explained that Montgomery County suffered more damage than other areas because of its large tree canopy. "It doesn't take but a minute for a storm of this strength to tear up an immense amount of property," Hainey said. "The county's abundant tree population increased the outage situation, since falling branches can easily rip through electrical wires."

Pepco responded immediately by contacting all employees and asking members of the police and fire departments for assistance. The company restored power to 90 percent of residents by Wednesday and managed to light the remaining 26,000 homes the following day.

Hainey stated that electrical crews are now focusing on individual areas. "There are going to be pockets of homes where crews will have to go in," he said. "The way the process works is, Pepco targets life-threatening situations first, before restoring power to large circuits and neighborhoods. After that, it becomes a door-to-door operation."

Pepco has undergone a barrage of criticism from Montgomery County executives but is now taking responsibility for its handling of the situation. The company's caller response technology had given out false restoration-time estimates to customers who called directly after the storm. In a press conference, regional president Thomas Graham admitted the automated system was faulty and said it will be fixed once the current crisis is resolved.

"We understand power outages are an inconvenience," Hainey said. "Pepco is working round the clock and doing everything possible to completely restore electricity."

Montgomery County spokeswoman Esther Bowring estimated nearly 225 stoplights were out, forcing police to direct traffic at a total of 150 streets and intersections. Fallen branches and power lines blocked off sections of major highways such as Route 28 and the Capitol Beltway I-495, and disrupted Metrorail schedules and RideOn Bus routes.

The summer storm started late Sunday afternoon and lasted for 20 minutes. "I heard the wind outside shaking the trees, and branches falling onto the deck," junior Rachel Smith said. "The lights flickered out for a few minutes before coming back on."

The heavy downpour, coupled with high-speed winds up to 90 miles per hour, was powerful enough to snap electrical poles, power lines and tree trunks. Officials said the last power outage of this magnitude occurred seven years ago, in the wake of Hurricane Isabel.

"I think the strong winds are what sets this storm apart from others and what caused so many outages," senior Ben Buchholz, who lost power for two days, said.

The Washington Post reported that the storm hit hard along the coast and created violent waves on the Chesapeake Bay, resulting in one man's death. Three other deaths have occurred – one the result of a broken electrical pole, and two by falling trees.