Stripped of her rights

Students nationwide should fight to uphold their rights to privacy

After a fellow student accused then-13-year-old Savana Redding of possessing drugs, school officials in Safford, Ariz. acted quickly. Not content with a mere pat-down, they demanded a full strip-search to ensure that Redding in fact had no drugs on her person. They were not searching for heroin, cocaine or marijuana. They were searching for two ibuprofen pills, the generic equivalent of Advil and Tylenol painkillers.

Redding, now 19, has since sued the school system, and her case was heard by the Supreme Court on April 21. But her chances of winning the case seem slim. A majority of court justices, including Chief Justice John Roberts, has already expressed their support for the school system's rights. Redding's sole proponent on the court is Ruth Bader Ginsburg, the only woman on the bench. If the high court were to rule in favor of the school system, students nationwide would suffer a severe loss in civil liberties. 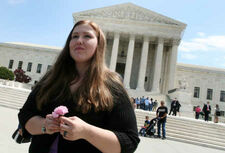 Photo: Redding, 19, fights for the rights to privacy. Picture courtesy of Wilson/Getty.

Photo: Redding, 19, fights for the rights to privacy. Picture courtesy of Wilson/Getty.

The justices who have expressed support for the school system are approaching the case in an inappropriately nonchalant fashion. Justice David Souter commented in the first hearing, "My thought process is I would rather have the kid embarrassed by a strip-search, if we can't find anything short of that, than to have some other kids dead because the stuff is distributed at lunchtime and things go awry." The embarrassment that Souter so carelessly described was characterized by Redding as "the most humiliating experience” of her life.

The Supreme Court's 1969 decision in Tinker vs. Des Moines stated that students do not surrender "their constitutional rights at the schoolhouse gate." The Supreme Court, however, decided in the 1985 case, New Jersey vs. T.L.O. that schools have broader abilities to search students. The 6-3 ruling in New Jersey vs. T.L.O. also gave schools the right to search students with "reasonable cause" rather than the "probable cause" standard upheld used by American law enforcement.

The grounds upon which Redding was searched were far from reasonable. The principal authorized Redding's search after hearing just one of Redding's peer's accusations. Even though Redding said she was willing to have her pockets or locker searched, Safford's principal decided to order a search of her body instead. That Redding's parents were not notified of the search is an atrocity.

Savana Redding is yet another victim of the lack of student's rights. The high court needs to decide in her favor and make a point that what Safford Middle School did was a flagrant violation of the Constitution. In the 1985 New Jersey vs. T.L.O. decision, the court said that schools have the duty to provide a safe environment for students. But a school in which students live in fear of strip-searches is not a safe environment.