Students raised $780 towards a New Orleans rebuilding trip during a fundraiser concert held on Wednesday. The trip, which will be held in July and is led by Blair juniors Sam Elkind and Leah Ragen, is in partnership with the St. Bernard Project, a non-profit organization that rebuilds homes in St. Bernard Parish of New Orleans. 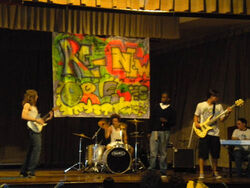 Photo: Blazers rock the stage at ReNew Orleans on Wednesday.

Photo: Blazers rock the stage at ReNew Orleans on Wednesday.

The concert, called "ReNew Orleans," was held at Temple Shalom in Chevy Chase from 7 - 9 p.m. The night's profits will go towards reducing the cost of the trip, according to Ragen. Elkind and Ragen started organizing the trip last year based on a similar trip arranged by county students during the summer of 2007. The group of 25 students from five different county high schools will be constructing a house in St. Bernard Parish from July 11 - 18, according to Elkind. "We will be rebuilding by day, and learning about the city during the evening," Elkind said.

The St. Bernard Project was founded in 2006 by D.C. residents Zack Rosenburg and Liz McCartney with the goal to rebuild the lives and community of the people in St. Bernard in the aftermath of Hurricane Katrina. Through their rebuilding program, volunteers have rebuilt homes for more than 200 families, according to the organization's website.

The concert raised money through a $5 admission fee as well as a bake sale held throughout the event. Patrons were also provided with forms to make donations directly to the St. Bernard Project.

Prior to the event students raised $12,000, the needed amount to build the house, through a letter-writing campaign, according to Ragen. "Basically we wrote letters to family, friends, everyone we know asking for donations," Ragen said.