Everyone wants to put their hometown on the map, and junior Dio Cramer managed to do just that. In late 2014, the photo messaging platform Snapchat added a feature called 'Geofilters' where users can use a filter specific to their location. Filters allow users to superimpose pictures over the pictures that they take. An in March of 2015, Cramer made a Geofilter for Blair that students can add to their photos only when they are inside the building. 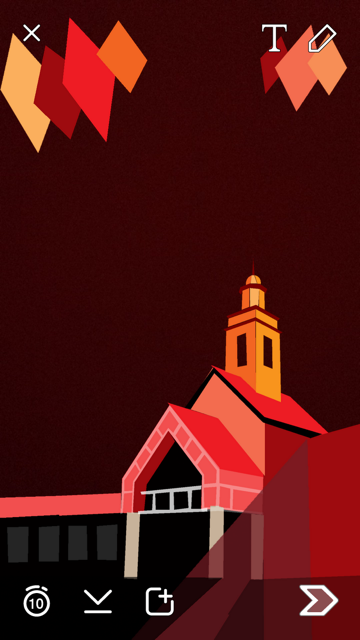 Cramer decided to create the filter when she learned that another school in Montgomery County had one of their own. "My friend told me that I should create one for Blair because it would be cooler than the one for the other school," she says.

The filter features a cartoony red silhouette of the front entrance of Blair. Cramer came up with the design on Photoshop and submitted it to the Snapchat website within the afternoon. "I submitted it really fast, so I was surprised when they accepted it in two days," she explains. To submit a Geofilter, users must make sure the filters fit certain dimensions, and follow a few other requirements.

Since her Geofilter has become available, Cramer has received positive feedback from the Blair community. "A lot of people send me Snapchats of them using the filter and I really enjoy getting those," she says. She was also happy to see that when she tweeted the filter, it received over 100 favorites and about 80 retweets.

Students recognize the uniqueness in the fact that the filter was created by a fellow student. "This progression from our students will definitely expand creativity and acceptance for years to come," junior Ayame Garrett explains.

Since their creation, Geofilters have become very widespread. Major cities like New York City or Los Angeles are making filters specific to them, and in the past week, a filter for Silver Spring, Maryland has become available. And as we see with Blair's Geofilter, they are becoming much more specific. "My brother wants me to make one for our house," Cramer jokes.