When senior Jose Kafie lived in El Salvador, his parents were actively involved in his education. They hosted a parent reunion, met with his teachers regularly and made time to talk with Kafie about school. However, once his family moved to Silver Spring in search of more opportunities, everything changed.

Now, Kafie's parents must work long hours at several jobs to support the family and are rarely available to talk with Kafie or his teachers about his schoolwork as they once could in El Salvador. The language barrier between Kafie's family and the school makes active parental participation nearly impossible. "It was like there was this huge wall, and they couldn't do anything. They couldn't express themselves to my teachers like they used to," Kafie says.

Students all over the county must deal with this lack of communication between their parents and their teachers. MCPS has over 16,000 international students representing 154 countries and 120 languages. More than 74 percent of these families speak a primary language other than English, according to a 1999 issue of MCPS' The Bulletin. Although MCPS has made attempts to make translations available to families who need them, their efforts have not been effective enough to prevent the alienation of non-English speaking families. As a result, these families know very little of what goes on at school and in their children's education.

Like Kafie's parents, many Blazers' families must grow accustomed to education practices unfamiliar to them. For senior Abdulkadir Mukhtar and his family, who came to America four years ago to escape civil war in Somalia, the system of education at Blair was entirely new. Before coming to Blair, Mukhtar had spent only three and a half years in school, where he learned minimal English. Mukhtar's fragmented education at these schools was exceedingly different from what he would find at Blair, and when they first moved to the U.S., his mother had a lot to learn. "She didn't even know how to dial phones, how to write a letter or how to communicate with other people," he says. 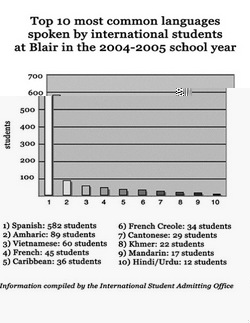 Photo:
Board of Education member Gabe Romero says the disparity among education systems of different countries is a source of the problem. "We have to understand where [the parents] are coming from, how they perceive education in their own cultures and what kind of parent-teacher relationships have they had or have not had. That's the beginning of the problem,” he says.

Mukhtar's mother has not let language or her unfamiliarity with American schools hinder her involvement in her son's education. "She didn't have any idea about how the school worked, but every time there was a meeting, she was there,” he says. Mukhtar has the best command of English in his family, so he goes along to each meeting to translate for her.

To increase communication between home and school, a 24-hour Language Line Service has been purchased by MCPS. The service offers 140 languages translated by interpreters who conduct the three-way conversation over the phone. This service, says Blair ESOL Director Joseph Bellino, is very convenient when a language not spoken by the available faculty at Blair is needed for a parent-teacher conference.

Still, parents who are new to the country often must work long hours to support their families and are rarely available during the time that teachers are, says Romero. Senior Caizhen Li's parents have never personally spoken with her teachers because, she says, they must work 12 hours a day, six days a week. By the time they get home from work, she is already asleep.

This lack of communication between students and their parents makes it easy for students to knowingly keep information about school from their parents, says Beatriz Mendoza, former Blair Community Outreach Coordinator and current Parent and Community Coordinator of the MCPS Division of Family and Community Partnerships. She recalls one student who told his mother that the E's on his report card stood for "Excellent." "These parents depend on students to tell them information, and they don't always do that," says Mendoza.

Lack of parent involvement can also damage students' futures outside of high school, says Mendoza. "Parents don't know what they should know about financial assistance. So because of the lack of information, students don't get to go to college," she says.

The problems are not just academic. When parents are busy with multiple jobs and are out of contact with the school, they often fail to realize when their child gets into social trouble, says Romero.

When Mukhtar found his brother hiding letters from his teachers informing his family of his repeated absences from class, he had to tell his mother. "She only knew when I told her. She had no idea,” he says.

It is harder for students to be successful in school when parents cannot address their requirements, says Romero. "By default, students need someone to advocate for their needs, someone understand how to articulate them. When they don't, they could very easily fall behind," he says.

The PTSA is hoping to attract the Latino community through a parent empowerment program coming to Blair in the spring called "Conquistas Tus Sueños," or "Conquer Your Dreams," which will teach Latino parents how to manage conflicts in the family, better advocate for their children and work with the school system. However, Rothstein admits that the PTSA currently has no way of reaching the families that speak languages other than Spanish. "The PTSA is not doing nearly enough, but we are all volunteers with limited time," says Rothstein.

One third of Blair's population is composed of current or former students in the English for Speakers of Other Languages (ESOL) program. Out of these families, Bellino says he would not be surprised if none had ever been to a PTSA meeting. Rothstein believes the root of the problem rests with MCPS, who she says needs to better publicize resources that already exist in the communities, especially in clusters like Blair with high populations of non-English-speaking families.

For example, MCPS funded the development and delivery of the "Conquistas Tus Sueños" program, but not "one single PTSA leader in the Blair cluster was aware of its existence," she says. The program would not have been discovered by the PTSA if a Latino community activist had not mentioned it to Rothstein.

Mendoza believes that the most effective way to reach out to non-English-speaking families is through establishing meaningful relations between parents and schools. "Yes, it is very hard, but we need to be persistent at reaching parents on a one-on-one basis and providing constant information to them. We can't give up," she emphasizes.

Although Kafie's parents could not easily communicate with others at Back-to-School Night, they left with a favorable impression of the Blair community. "They really liked it, because they said the other people smiled at them. They couldn't talk to them because of the language," he says, "but at least they smiled."