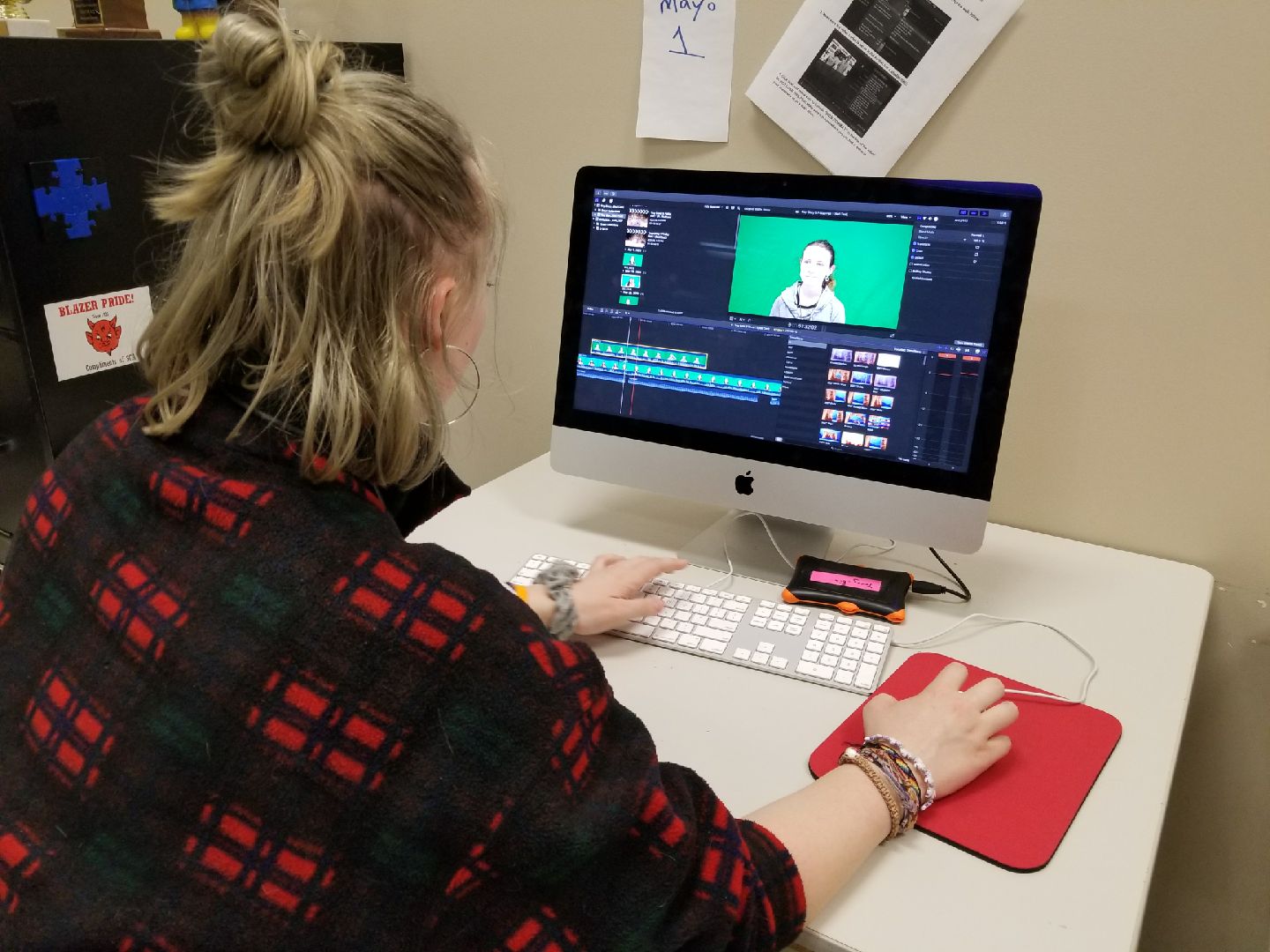 Bruckner, Park-Pearson and Olsson are just a few of the students creating products for the Toxicity Project, a pop-up museum sponsored by Bethesda-Chevy Chase (B-CC) High School teacher David Lopilato. B-CC students created a pop-up exhibit last year about the teenage experience, called the Museum of the Contemporary American Teen, which was "met with a lot of success," according to Lopilato.

Lopilato wanted to create a similar project this year and decided to explore the toxic situations teens often face. "[The word toxicity] just kept coming up in terms of masculinity, in terms of gun violence, in terms of stress and in terms of competitiveness. The dominant narrative is that teens have it made today as compared to in the past, but this exhibit challenges that notion," he explains.

Brucker and her partner, junior Maria Cannon, are using film to explore the toxicity of gender as a limiting concept in individuals' lives. Rather than focusing their video on the traditional subject of toxic masculinity, Bruckner and Cannon decided to take a different angle inspired by what they had seen around them (and the lack thereof) regarding gender norms.

"We wanted to look more in depth at how enforcing a gender and living your life as a specific gender can be a toxic experience whether it's a more masculine or more feminine gender," Cannon explains. "We just used what we knew and what we had experienced… and shaped a story," Bruckner adds.

Bruckner and Cannon also drew from personal experiences to inspire their film's subject. "I'm queer, and Haili's also queer… I think it's much more common now for queer people who are lesbian or gay to think about how their queerness extends to their gender as well as their sexuality," Cannon elaborates.

Park-Pearson and Olsson are using their film to highlight an equally prominent subject — high school stress. "We both are very stressed," Park-Pearson laughs. "When we were introduced to the Toxicity Project by Mr. Lopilato and Mr. Mayo, I thought this was a very relatable topic." She and Olsson decided to take a narrative angle with their film, piecing together short clips of students discussing their experiences with stress.

Confronting the complex themes in their film has been a challenging experience for Park-Pearson and Olsson, and they find it ironic that attempting to discuss the dangers of stress on teens has actually stirred up stress in their own lives. "Because we're very personally connected with the issue, it can be a little emotional when we're working on the project, to hear these incredibly depressing metaphors and descriptions of stress… It kind of just reminds me of how stressed I am," Olsson admits.

While Blair students work on their films, students at B-CC are creating different projects for the pop-up. Several individuals collaborated to create an interactive Escape Room about privilege in education. Senior Néa Ranganathan is working with her IB Social Anthropology classmates Virginia Brown, James Pfaff and Gloria Karekezi to create a life-size sculpture called the "Bethesda Bubble."

The sculpture, which explores the differences between the Bethesda community and other areas in Montgomery County, will contain food and clothing items that investigate stereotypes and play off the contrast of dark and light themes. "We're hoping to see the discrepancies between what people think internally in our school versus what people think outside. We hope that when people see [the project], they'll understand that we're living in this bubble in Bethesda," Ranganathan says.

Other students at B-CC are exploring topics including the experiences of gender fluid students who face pressure to conform and the recent college admissions scandal. Their projects, which use everything from security cameras to cardboard cutouts, are "interactive, sometimes amusing and sometimes brutally in your face," according to Lopilato.

The technicalities of the Toxicity Project have been proved difficult, especially for the Blair filmmakers who are foraying into new territory with the experimental styles they are using. Because of the lack of scripting and planning, Bruckner and Cannon felt slightly lost at the beginning of their process. "With this film, it's like you have a piece of fabric and you're pulling it to fit a table in a very certain way. It's a lot of working it without really knowing how it's going to look in the end," Cannon explains.

Olsson and Park-Pearson faced a similar situation with their product. "We had no clue what the film would be like or what themes it would focus on before we did all our interviews," Olsson echoes. "It's like a reversal of what we usually do."

Ultimately, however, the experience has been rewarding for both B-CC and Blair students. Ranganathan explains that creating the bubble helped her self-reflect. "I'm starting to see how I might be part of the Bethesda bubble… and take for granted some of the opportunities that we have at this school," she explains. Park-Pearson enjoyed finding solidarity with other students through interviews. "For me, the most interesting part was hearing all those different metaphors for what stress feels like or hearing those different things that people are stressed about," Park-Pearson says.

The creators' ultimate goal? Broadening perspectives and spreading comfort. Bruckner and Cannon want to push those who don't normally evaluate gender to do so. "When people see our video, we want them to be exposed to something that they may not have really explored… and think about how gender plays into their own life," Bruckner says. Ranganathan hopes that her team's sculpture decreases polarization between students from different walks of life across the county. Park-Pearson and Olsson would like to encourage others to open up and understand that "[stress] is something that is happening to millions of kids."

Acknowledged in almost every sector of society and even being named the 2018 word of the year, toxicity is largely being recognized as a legitimate problem. Through their involvement in the Toxicity Project, this group of Montgomery County teens is doing far more than just recognizing it. They're fighting it by fostering conversations. "I think… the fact that we always try to push these hard conversations away [is a big part of the toxicity problem]," says Ranganathan. "If we're just a little more open, it would help with the toxicity."

The Toxicity Project will be on display April 26 through April 28 in the former Bank of America building on Wisconsin Ave. in Downtown Bethesda. The opening ceremony will take place at 6 p.m. on April 26, and Blair students will showcase their films at 8 p.m.