Blair to become more eco-friendly through lighting and recycling programs

Students for Global Responsibility (SGR) is implementing two new programs designed to make Blair a more energy efficient and environmentally friendly school, according to SGR sponsor George Vlasits. They plan to begin by reducing electricity usage by installing new lamps and by removing light bulbs from fixtures and then move on to a continuation of the recycling programs established earlier this fall. The plans will be carried out during the remainder of this week and over spring break. 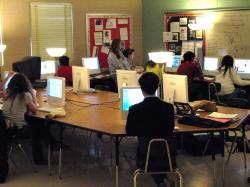 Currently, SGR is working on the reduction of electricity used for lighting in classrooms. They began by replacing the ceiling lights in rooms 144, 165, 174 and 246 - all computer labs - with approximately 15 energy-efficient lamps each. These lamps use compact fluorescent bulbs that use far less energy than the ceiling lights, according to Vlasits. "If all the lamps [in one room] were turned on, it would still only use about 15 percent of the electricity used by the overhead lights [in that room]," he said.

Montgomery County Public School (MCPS) provided Blair with the energy-efficient lamps through the "Green Schools" program, which funds schools to save energy. Blair can keep up to $5,000 it saves through the reduced electricity usage, while the rest goes back to the county, Vlasits says. He hopes to have these lamps installed in more rooms eventually, mostly computer labs.

Another project that is currently in the works is the reduction of the number of bulbs in the classroom ceiling lights from four to three. State laws currently set a required minimum of 30 foot-candles, a unit of light equivalent to one candle's worth of light from one foot away, at desk level in classrooms. With one less bulb in each ceiling light, there would still be about 50 foot-candles of light at desk level, Vlasits said. The SGR is testing the change in 18 social studies rooms before implementing it in other departments, and building services will be changing the bulbs. Vlasits estimates these two changes, when implemented fully, could result in the school using nearly 70 percent less energy than it does currently.

Reducing the bulbs may take the SGR through spring break, though Vlasits hopes that test runs will be set up this weekend. "We could do it tomorrow if we had the cooperation of building services," Vlasits said. "They have been reluctant but agreed to do a test run."

After all the classrooms are finished, the SGR hopes to remove a bulb from each of the ceiling lights in the hallways. They also hope to start an ongoing electronic-device-recycling program to collect and recycle cell phones and other electronic devices. This program is still in the planning phase, but Vlasits hopes to start it sometime after Spring Break.

The group has also been expanding the recycling program implemented in November of this school year by placing covers on all the paper recycling bins to make sure only paper can go in, according to Vlasits. They are currently working on improving collection procedures for recycling to follow up with the program. Currently, all the recycling bin contents are not recycled and end up with the trash, mostly because they are not sorted or are contaminated with trash.

The SGR is also planning multiple initiatives to make Blazers more aware of environmental issues. They screened clips from the film "An Inconvenient Truth" during non-magnet advisory classes last Tuesday. They are also spearheading an environmental film series whose first showing was "The Power of Community" last Friday at 7:15 p.m. The next viewing will be of "We are all Smith Islanders" on Friday April 11th at 7:15 p.m.