Blair clubs will sponsor various events in the coming weeks

The SGA, several clubs and the girls' basketball team are fundraising to support victims of the earthquake that struck Haiti on Jan. 12. Efforts include bake sales, lunchtime contributions, individual fundraising and photo sales.

Blair's SGA was the first school organization to collect money for Haiti, beginning one day after the earthquake. SGA members went around the SAC and along Blair Boulevard during 5A and 5B lunches with donation boxes. The SGA has raised $2,127 so far, according to SGA president Alex Bae. 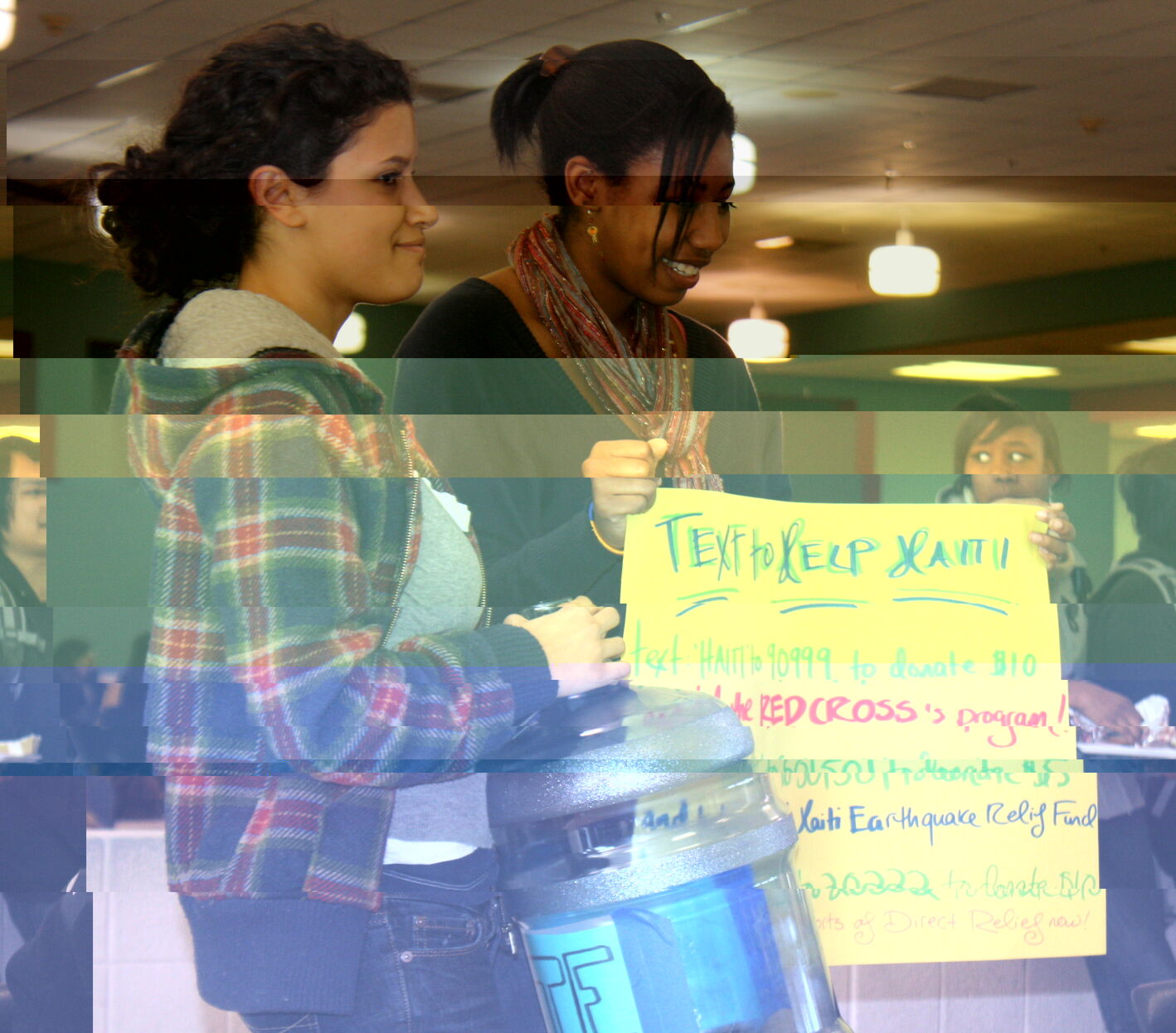 Photo: Juniors Sacha Langer and Sana Barclay go around at lunch hoping to collect money to help the Haiti earthquake victims as part of SGR's "Save Haiti" campaign.

Photo: Juniors Sacha Langer and Sana Barclay go around at lunch hoping to collect money to help the Haiti earthquake victims as part of SGR's "Save Haiti" campaign.

Bae believes that as a student-school liaison, the SGA plays an important role in supporting causes like the Haiti earthquake. "I think it's a human response to contribute when these global events happen, and for SGA to facilitate these efforts," Bae said.

The SGA will continue collecting money in the coming weeks. There have also been talks with other Blair clubs to take over SGA's efforts in raising money for Haiti, according to Bae. "We don't want competing for students' money to occur," he said. To address this issue, freshman class president Irene Ravitz has conversed with Students for Global Responsibility (SGR) about taking over SGA's fundraising. However, plans are still uncertain, according to SGR president Emma Kaufman.

Like SGA, SGR has launched a "Save Haiti" campaign, collecting money from Blazers at lunch in empty water jugs. "We've collected 200-some dollars and donated our money to the Red Cross," Kaufman said. "We're also giving information to a lot of Blazers on ways to donate through texting." 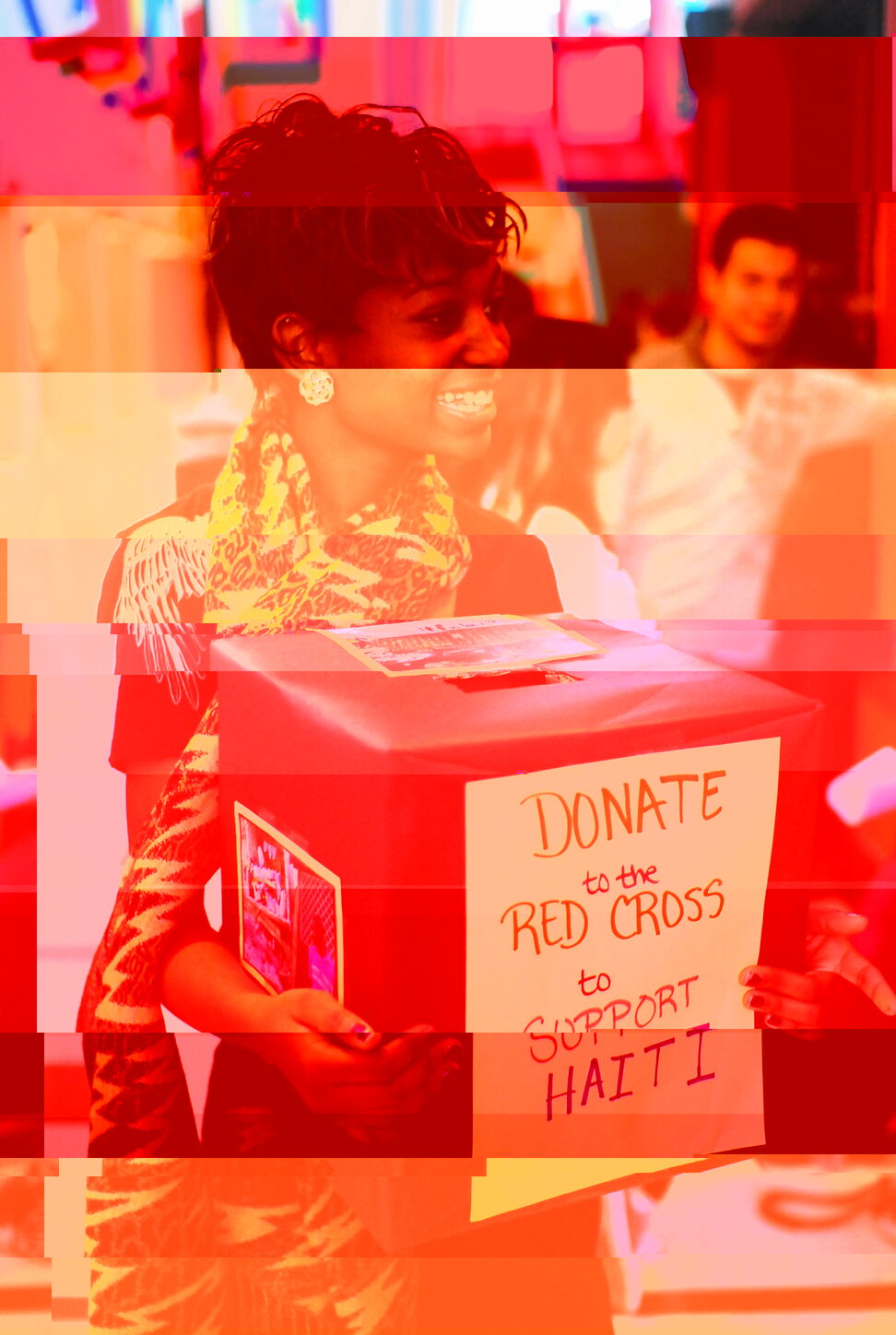 Photo: Senior Tamara Taylor works as a member of the SGA to raise money in response to the devastating earthquake in Haiti.

Photo: Senior Tamara Taylor works as a member of the SGA to raise money in response to the devastating earthquake in Haiti.

For the girls' basketball team, supporting Haiti was not only for a good cause, but also in support of one of their team members who lost family members in the disaster. After an away game at Gaithersburg High School, team member Sedeka Dubuche discovered she had lost two uncles and a cousin in the Haiti earthquake.

The same day, Coach Erin Conley brought up the idea of raising money for the cause, according to Manager Darcy Pelz-Butler. The entire team was receptive to the suggestion. "One of our teammates lost family and we wanted to support her," teammate Adri Jackson said. To publicize the cause, Jackson created a Facebook group, "Help Girls' Basketball Help Haiti."

The 16 girls on the team were handed envelopes to raise money individually, which Conley plans to collect in the upcoming week, according to junior Janet Henkai. Although the total amount raised is unknown, Jackson estimates that the team will collect at least $500. Individually she has raised $140; Henkai and Pelz-Butler have raised about $100 each.

As a result of the fundraising, both Henkai and Jackson believe the team has become more unified. "It brought us a lot closer since our team was going through hardships," Henkai said. 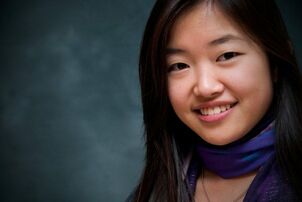 Photo: Blair Photojournalism will take photos, like the one above, to fundraise for Haiti.

Photo: Blair Photojournalism will take photos, like the one above, to fundraise for Haiti.

Another club raising money for Haiti, specifically the Red Cross, is Blair's Photojournalism Club. After wanting to fundraise but not being able to find a cause, they finally found an answer in aiding the earthquake's victims.

The club will employ their photography skills to raise money. "Since this is a photography group, we thought that it's only reasonable to raise money through what only we can do - that is, to take portraits of people and sell the prints and electronic copies for very reasonable price," club president junior Wenting Ma said. The fundraising will begin on Wednesday and will last until Feb. 26.

Aside from direct money collection and photography, two Blair clubs will raise money with baked goods. Project Sweet Tooth and the French Honor Society plan to hold bake sales in the near future to aid earthquake victims. Project Sweet Tooth, a club that raises money for charity organizations by baking, will change its focus to the Haiti cause, according to co-president Elissa Shiau. 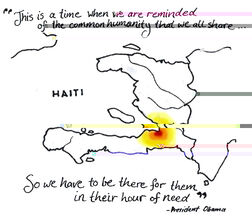 Photo:
French Honor Society (FHS) will have an after school week-long bake sale at Blair during the first week of March, according to club president senior Diana Jeang. The Haiti earthquake has become a major cause for the society, one that has been widely discussed during meetings, as French is the official language of the country. "FHS feels one of our purposes is not only to encourage awareness in other Francophone countries, but also to support them," Jeang said.

Blair's Key Club has donated $50 from its treasury towards Haiti relief, according to Key Club President Amy Liu.

There are many ways you can help Blair clubs raise money to help Haiti:

SGA (supporting the Red Cross):
Make a donation to SGA members, who will carry boxes in the SAC and along Blair Boulevard during 5A and 5B lunches.

SGR (supporting the Red Cross):
Make a donation to SGR members carrying water jugs in the SAC during 5A and 5B. A SGR donation jug is also set up in front of the SAC during the lunch periods.

Girls' Basketball (supporting the Red Cross):
Make a donation to any team member on the girls' basketball team or give money to Coach Erin Conley.

Blair Photojournalism Club (supporting the Red Cross):
Interested students or staff can visit the studio in room 177, where club members will take professional quality portraits. A table is also set up outside the SAC to pre-pay for photos.