Students living on the border 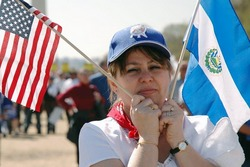 Photo: A protester displays her pride in her biculturalism at an immigrant rights rally on the National Mall on April 10. Many Blair students participated in the demonstrations.

Photo: A protester displays her pride in her biculturalism at an immigrant rights rally on the National Mall on April 10. Many Blair students participated in the demonstrations.


When freshman Misael Cruz heard the thumping roar of a helicopter overhead, he felt his heart sink. After paying $3,000 to be escorted illegally across the border between Mexico and the U.S., Cruz was finally on American soil - only to be spotted by the U.S. Border Patrol as soon as he set foot in New Mexico.

Guided by the helicopter's glaring spotlight, a police car found the truck where Cruz sat surrounded by a group of other illegal immigrants from Latin America. He was arrested, jailed and eventually released to his parents, both of whom had come illegally to the U.S. almost two decades earlier. Since his arrest about 18 months ago, Cruz has appeared before a judge four times on immigration charges, but his future remains uncertain: As the U.S. government struggles to reform its current immigration policy, Cruz's fate hinges on the outcome.

Last December, the House of Representatives passed a bill to make illegal immigration a felony and boost security along the 2,000-mile border between the U.S. and Mexico. The bill, known as HR-4437, has increased public involvement in the immigration debate. In the months following the passage of HR-4437, protesters have gathered across the country, from New York to Los Angeles to Washington, D.C., to rally for the rights of the estimated 11 million illegal aliens living in the U.S.

If enacted, HR-4437 could send undocumented Blazers and their families back to the countries that they risked everything to leave. However, Cruz and some of Blair's other illegal immigrants agree that no matter how high the cost or how serious the consequences, they would risk it all again to return to the U.S. In their eyes, America offers a future that is too promising to deny.

For Cruz's parents, the U.S. offered sanctuary from the violence that had engulfed their home country. Beginning in the 1980s, a bloody civil war tore through El Salvador as guerrilla groups battled government forces for political control. Over 70,000 people died during the 12-year conflict, and more than 300,000 fled the country.

When violent street gangs, known as maras, began recruiting young Salvadorans near Cruz's home- town, his parents knew it was time to leave. They fled illegally to the U.S., leaving Cruz, then just seven months old, in the care of his grandparents.

The gang violence extended beyond El Salvador. As the maras rampaged his native Honduras, Anton, a freshman, watched his family fall apart. Eleven years ago, his parents separated, and his father fled illegally to Indiana. Two years later, his mother immigrated to Silver Spring to move in with her new husband, leaving Anton in the custody of his grandmother. As Anton grew older, the maras began harassing him in school. When his mother learned of the gangs' efforts to recruit her son, she knew she had to get him out of Honduras.

When Hurricane Stan hit Central America in October 2005, Anton found a chance to leave the country. The hurricane and subsequent earthquake killed hundreds of people and forced the evacuation of thousands, plunging the region into a state of emergency. According to the Center for Immigration Studies, the Immigration Act of 1990 allows undocumented immigrants to find temporary sanctuary in the U.S. in times of ongoing armed conflict or natural disaster in their home states. When the situation in Honduras reached the breaking point, Anton's mother convinced him to seek Temporary Protected Status (TPS) in America.

Caught in the act

From the moment he left his home in Honduras eight months ago, Anton wanted to be caught by the U.S. immigration authorities. While TPS allows undocumented aliens to remain in the U.S. for an extended period of time, immigrants can only apply for TPS if they are caught illegally crossing the U.S. border.

To get into the U.S., Anton paid $5,000 to a "coyote," a smuggler hired to traffic illegal immigrants across the border. He traveled by bus from Honduras to Mexico, where the coyote guided Anton and 17 other immigrants through the desert to the U.S. border.

For three days, the group trekked through the desert with no food and little water. Despite overwhelming fatigue and dehydration, they were expected to soldier on, Anton remembers. When one girl became too exhausted to move, the group left her behind. The immigrants marched until they reached San Antonio, Texas, where Anton was arrested. After spending three months in a Houston youth prison while his mother filled out government paperwork, Anton was granted temporary protection.

Almost 16 years after his parents left El Salvador, Cruz made the same journey. After Cruz was arrested at the border, his parents paid his bail, picked him up in El Paso, Texas, and brought him back to Silver Spring. For the first time in his life, Cruz met his four younger brothers, all of whom were born in America and are American citizens. Reunited with his family at last, Cruz enrolled at Blair.

The presence of illegal aliens like Cruz in U.S. public schools has long been a contentious issue in the immigration debate. In 1982, the U.S. Supreme Court ruled in "Plyer v. Doe" that undocumented children are entitled to a free public education, according to the Center for Community Change (CCC). Currently, illegal aliens can attend Blair as long as they live within the Down County Consortium and can provide proof of their vaccinations, explains English for Speakers of Other Languages (ESOL) teacher Pilar Romero, who also translated for Cruz and Anton.

Still, the debate continues. According to a TIME Magazine poll published on April 10, 51 percent of American adults believe that illegal immigrants have no right to public education. Even so, the quality of the U.S. school system draws many immigrants here, as an American education can often open doors to better-paying jobs than those available in their homelands. Julian, a freshman, came to the U.S. two years ago because he saw no future for himself in El Salvador. Much of the work available there is day labor, he says, which pays poorly and is unreliable. Julian felt uncomfortable with that level of economic uncertainty, he says, so he came to the U.S.

Because the process of legal immigration can take as long as 10 years, according to Maricela Donahue, a CCC field organizer, Julian decided to find a quicker way into the country. He traveled by plane from El Salvador to Baltimore under the pretense of visiting his parents, both of whom had been living illegally in the U.S. for over a decade. After landing in the U.S., Julian told an airport customs officer that he would soon return to El Salvador. But he never did.

"We are not criminals"

Two years later, Julian still lives with his family in Silver Spring, although he admits that he often worries about being deported. When he heard that HR-4437 had passed the House, his fears intensified, he says. Depending on how the immigration debate is resolved, Julian and his family could soon be packing their bags for El Salvador -
or worse, for prison.

In Julian's eyes, the bill is unfair, as it would deny America's undocumented immigrants the chance to better provide for themselves and their families. Julian explains that most immigrants, both legal and illegal, come to the U.S. seeking better jobs and better lives.

On April 10, Julian joined a crowd of 500,000 protesters to rally against the law that would criminalize America's undocumented immigrant population. The throng of protesters marched through Washington, D.C., carrying signs that read 'Stop HR-4437' and 'We are not criminals.' As Julian watched people of different nationalities gather together to support the immigration cause, he felt hopeful that the immigration debate will be resolved in his favor.

Get up, stand up

The participation of teenagers like Julian in recent protests and marches is hardly uncommon. According to Donahue, the immigration rights movement includes substantial youth involvement. High schools in Los Angeles, Chicago and New York have all held student-organized walk-outs to protest HR-4437.

The bill poses a looming threat, Donahue explains, for both the children of illegal immigrants and illegal teens. "They realize our immigration system is unfair," she says. "They really care about their families and how the bill would affect their families, and in some cases, even their own futures."

According to Donahue, HR-4437 is the most extreme of a number of immigration reform bills that have been introduced to Congress. On Jan. 27, it was referred to the Senate Judiciary Committee, whose job, she explains, is to find a middle-ground solution to the immigration debate. "It's still unclear what compromise they will reach," Donahue says. "HR-4437 really doesn't provide any solutions to the immigration problems we face today."

Despite HR-4437's provisions for stricter punishment and enforcement, the bill may not be enough to discourage illegal immigrants from coming to the U.S. Cruz explains that if he were deported, he would willingly repeat his entire ordeal - the $3,000 price, the 1,500-mile bus ride, the arrest and the night in jail - to return to the U.S.

For the undocumented immigrants already living in the U.S., the bill's threats of jail time and deportation may not outweigh the opportunities they envision for themselves on American soil. "To be someone in the future, that's why they came here," explains Romero. After risking their lives and freedoms to come to the U.S., illegal immigrants will not be willing to leave without a fight, she says.

While Julian believes his situation is stable for now, like the others, that he would not hesitate to come back to America if he were deported. His future here is brighter than the one he had in El Salvador. He plans to attend medical school and become a doctor - something he never even thought possible in El Salvador. "I'm learning English, and I can get a better job," Julian says. "This is the best thing that has happened in my life."

Audrey Kubetin. Audrey lives off of tea, tofu and Tool. The end. More »