Over 4,000 students and youth from across the nation rallied at the White House and Capitol on Feb. 26 from 11 a.m. to 2 p.m. to demand decisive legislation to end AIDS. The Student March Against AIDS, in addition to a series of other weekend events such as youth seminars and lobbying, was a part of a Global Day of Youth Action to end AIDS. 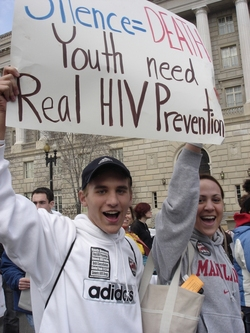 Photo: Senior Greg Breads holds up a sign at the student AIDS march on Saturday, Feb. 26, in Washington, D.C.

Photo: Senior Greg Breads holds up a sign at the student AIDS march on Saturday, Feb. 26, in Washington, D.C.


In response to the 2004 United Nations AIDS report, which stated that over half of all of the new cases of HIV discovered are in youths between the ages of 15 and 24, students from at least 25 states gathered at Lafayette Park near the White House, where speakers from the student-based organization Student Global AIDS Campaign (SGAC), among them 2003 Blair graduate Emma Simson, spoke to the crowd on the main demands of the campaign.

"Fund the fund, treat the people, drop the debt, stop the spread,” students chanted as they walked from Lafayette Park to the Upper Senate Park near the Capitol. SGAC, in partnership with other organizations such as Africa Action and Youth Advocates, was pressuring the government to fully fund the Global fund to fight AIDS, TB and malaria, which the Bush Administration has consistently under-funded. They called for prevention guided by science, not politics, in requesting the end to abstinence-only sexual education programs, the promotion of both female and male condoms and needle exchanges, according to the Student AIDS March web site.

The students marched for debt elimination in the world's poorest countries, many of whom are unable to provide their citizens with basic necessities due to obligations to larger world powers. They asked for full funding and reauthorization of the Ryan White CARE Act, which provides financial support to AIDS programs across the country, and better health care and benefits for health care workers and HIV/AIDS patients. Blair graduate Nora Toiv, a participant in the march, hoped that the Bush Administration would strongly consider the demands of the campaign. "This march is really important 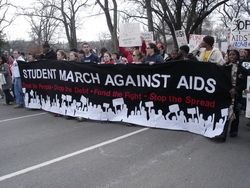 Photo: Students march in front of the Capital on Feb. 26

Photo: Students march in front of the Capital on Feb. 26

because of George Bush's awful politics towards AIDS in the U.S. and AIDS in Africa,” she said.

Other countries that took part in Global Day of Youth Action to end AIDS included Pakistan, India, Bangladesh, Uganda, Egypt, Sudan and Kenya, according to Healy Thompson, the national coordinator of the SGAC. "With thousands of students mobilizing today to fight AIDS, we know that we'll have a future worth inheriting,” she said.

To find out how you can donate money to the SGAC or become active in the organization, click here. Or, to learn more about the AIDS epidemic, click here.