In an effort to draw attention to the genocide occurring in the Darfur region of Sudan, Students Taking Action Now: Darfur (STAND) is holding an ongoing demonstration from 11 a.m. to 3 p.m. daily outside the Sudanese Embassy in Washington, D.C., from Jan. 1 through Jan. 10.

The protest is drawing students from colleges and universities all over the country, according to Sarah Reed, a STAND member and student at Wesleyan University. 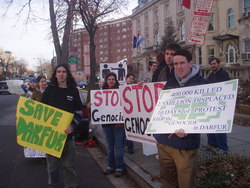 Reed believes the rally is raising awareness of the genocide, citing all the locals who have joined the cause, which includes several current and former Blair students. "Our protest has grown by leaps and bounds – from six people the first day to about 30 people today," Reed said.

Members of the Sudanese Embassy met with STAND activists on Jan. 6. The activists were surprised that the officials agreed to a meeting but were unsatisfied with the outcome. "They're spinning the story to not be associated with the genocide that is clearly occurring," says Reed.

The situation in Darfur is "one of the worst humanitarian crises in the world," according to the UN News Center. Since Feb. 2003, 400,000 people have died and 2.5 million civilians have been displaced, according to Save Darfur.

The STAND protesters believe that the Bush administration has not done enough to stop the situation, despite acknowledging that genocide was taking place in Sept. 2004. "We're really disgusted with the reaction of the U.S. government," said Reed.

In particular, the demonstrators are outraged that Congress recently rejected a bill that would appropriate funds to the African Union, the only peacekeeping force on the ground in Darfur.

Still, the protesters remain hopeful that when the U.S. becomes head of the UN Security Council in Feb. 2006, the government will propose making the African Union a UN force and will give the union additional troops.

The majority of protesters are college students who became involved in activism through STAND, a student enterprise with the goal of spreading awareness, instigating political action and raising funds for the crises in Darfur, according to their website.

Blair alumnus Nat Lichten, who graduated in 2005, said he is delighted that STAND has instigated action. "I thought it was wonderful people were out there doing something instead of just sitting there shaking their heads," said Lichten.

Since beginning, the vigil has drawn various protestors. One Silver Spring resident, Kay Elfant, was driven to attend the rally. "Any genocide is very personal to me… I'm Jewish and 50 years ago a third of my people were killed and taken off the face of the earth," she said.

Elfant is protesting in the cold despite pain from a muscle disease called Fibromyalgia because she feels a moral responsibility to help the people of Darfur. "You can't compare a few hours of cold or muscle pain to the pain of villages burned or families murdered," she said.