Students stand up for immigration rights

As Congress debates immigration reform, Blazers have participated in the nationwide movement for immigrant rights. On April 10, Blair students joined thousands of demonstrators on the National Mall to call on Congress to grant rights to illegal immigrants.

Senior Sebastian Johnson, the Student Member of the Montgomery County Board of Education (SMOB), worked with CASA of Maryland, a nonprofit Latino advocacy organization, to coordinate student involvement in the April 10 rally. 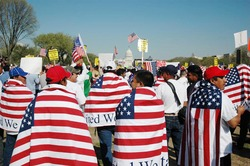 Photo: Demonstrators draped themselves in American flags during the National Day of Action for Immigrant Rights on April 10 on the National Mall. An estimated 500,000 people attended the demonstration.

Photo: Demonstrators draped themselves in American flags during the National Day of Action for Immigrant Rights on April 10 on the National Mall. An estimated 500,000 people attended the demonstration.

Johnson spoke to students and student government associations to encourage students to attend the immigrant rights rally. The issue of immigration reform is especially relevant in Montgomery County, said Johnson. "I support immigrant rights because we have such a large immigrant population in our county, which is very diverse, and it hit home to me as SMOB," he said.

There are 885 immigrant students at Blair, making up approximately 30 percent of the student body, according to English for Speakers of Other Languages (ESOL) resource teacher Joseph Bellino.

America needs to find a responsible solution to the illegal immigration problem, Johnson said. "As a country, we're the ones who created this system and this problem, and we need to solve it in a way that's fair to everyone," he said.

At the April 10 rally, Johnson spoke representing students involved in the immigration rights movement. "It was a really powerful moment to be in front of all those people," said Johnson. Organizers of the event estimated that over 500,000 people gathered at the Washington, D.C., protest.

Sophomore Gabriela Acosta attended the protest to urge Congress to give all immigrants rights. "My family is from El Salvador, and I felt strongly that me and my family should be protected [sic]," she said. "I thought [the rally] was really great. There were a lot of people afraid to speak out, but because there was so many people, there was strength in numbers."

CASA of Maryland, one of the immigrant rights groups organizing students for the rally, offered Student Service Learning (SSL) hours to students who attended the protest. MCPS policy states that students who participate in advocacy programs, including rallies, protests and other political activities sponsored by nonprofit organizations, are eligible for SSL hours. Students must acquire at least 60 SSL hours to graduate high school.

Schools have also raised concerns over students missing class to attend immigrant rights rallies. On May 1, several immigrant rights organizations coordinated rallies, protests and boycotts, in which many students nationwide left school to participate. Bellino explained that students have missed class to participate in rallies several times in the past, recalling when the Ethiopian Club organized a group of students to attend a rally in Washington, D.C., protesting the actions of the Ethiopian government. "MCPS policy states that when students want to miss school to attend rallies, they need prior parent permission," said Bellino. "When the Ethiopian Club wanted to leave school to attend a rally, we called their parents to get permission."

This is a significant educational opportunity for students who are involved in the immigration rights movement, said Bellino. "We want students to be thinking, discussing and understanding their rights," he said. "This is a really great way for them to express their ideas."