On Monday, Blair's first semester Shakespeare by Oral Interpretation class will perform a 25-minute compilation of various Shakespearean works at the Folger Shakespeare Library as part of the library's 28th Annual Secondary School Festival. From March 4 to 13, the Folger will host Virginia, Maryland and Washington, D.C. area middle and high schools in a Shakespeare appreciation festival honoring the English bard. 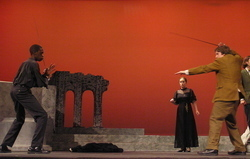 Photo: The fall play in 2005 - "Twelfth Night" - also performed at the Folger festival.

The Shakespeare class, taught by Kelly O'Connor, was chosen to be part of the ceremony after applying for a spot in the show. The class will perform a compilation of some of Shakespeare's most famous works, including scenes from "Antony and Cleopatra," "Pericles," "Othello" and "Richard III" according to O'Connor. Each school is allotted 25 minutes to perform their scene.

O'Connor looks forward to the festival and her class's opportunity to share Shakespeare enthusiasm. "It is a hugely exciting day; I used to work in the Education department of the Folger Library, so I know the event extremely well," said O'Connor. The students see other students enjoying Shakespeare, and they cheer one another on." Her students adamantly agree: "It is quite the opportunity to have the experience of performing at a world renowned Shakespeare theater," junior class member Nora McNally said.

Two class members, McNally and senior Malcolm Foley, participated in the Folger festival in past years. McNally performed in her seventh grade as part of a Takoma Middle School performance of "Romeo and Juliet" and Foley in his tenth grade as part of Blair's "Twelfth Night." "It's truly exciting to see other students doing Shakespeare and having the same passion for Shakespeare that I do," Foley said. "It's an inspiration."

Before entering in the Folger festival, the class performed their Shakespeare compilation on two separate occasions. "Originally the play was our semester project and we performed for parents and friends before exams in early January," McNally said. After the exam performance, the class was invited to a Shakespeare Symposium at the University of Maryland on Feb. 23, in which they performed the same set of scenes.

The class, which includes actors of all skill levels and grades, is currently in its first year at Blair. "There is a mix of mostly juniors and seniors – some have experience with performing, but some have never performed Shakespeare before," junior class member Maya Baum said.

O'Connor hopes to continue the class in the coming years and encourages Shakespeare lovers to join. "The goal is to experience the plays as plays – to think about them as actors, directors and designers do," O'Connor said. "Students perform almost every day, even if it's only a few lines from a play, and we spend a lot of time discussing the plays in performance."