Wandering through war zones, disregarding dying civilians and escaping close encounters with soldiers all while filming and reporting the pure carnage is a job fit for only the most daring of reporters. In "The Hunting Party," this astounding journalism team consists of nimble cameraman Duck (Terrance Howard), and the cocky yet honest war-correspondent Simon Hunt (Richard Gere). The team leaps over dead bodies in war-torn countries from Somalia to El Salvador all while dodging bullets, rockets and negative reviews from viewers at home.

Writer and director Richard Shepard's Bosnian war story infuses dark humor,violence and moral issues in wild chase which opens with the disclaimer that only "The most ridiculous parts of [the] story are true." This unconventional "true story" effectively blends an "Ocean's Eleven" semblance with a "Hotel Rwanda" impact.

The plotline is based loosely on an Esquire Magazine article written by Scott Anderson that outlines the escapades of five European and American war-reporters who are mistaken as a CIA hit-squad. Together, the men half-heartedly attempt to catch Radovan Karadžiæ, a Bosnian war criminal. The film replaces Karadžiæ with "The Fox" (Ljubomir Kerekes), a slippery leader of the Republika Srpska – a Serbian political entity in Bosnia – who is said to be hiding in the mountain town of Èelebiæi. 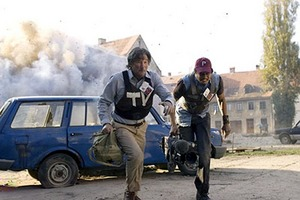 Photo: Hunt (Gere) and Duck (Howard) risk it all to get the perfect story. Photo Courtesy of The Weinstein Company LLC.

Photo: Hunt (Gere) and Duck (Howard) risk it all to get the perfect story. Photo Courtesy of The Weinstein Company LLC.

Regardless of the brave and difficult task these men have taken upon themselves, the audience soon begins to realize that these journalists are far from heroes: Hunt has become a thief and a cheat in his exile, Duck has gotten used to the high-life of a lavish New York studio and the inexperienced greenhorn reporter Benjamin (Jesse Eisenberg) has just graduated from Harvard and is only in Bosnia because his father is the Vice-President of the network.

For the journalists, reality hits harder than an artillery shell launched into Sarajevo as Serbian contact Mirjana (Diane Kruger) tells the reporters that they "know nothing about the war until they've been raped for seven hours straight." It is this kind of graphic detail that makes it impossible for viewers to sympathize with the "Fox," who is shown touting himself through villages with a satisfied smirk on his face after the women have been raped and the children slaughtered.

Yet amidst the powerful feelings of shock and revulsion, the film manages to maintain a sense of humor with several funny scenes. (One features a run-in with a midget who rides in an orange caravan of miniature cars.)

Richard Gere, who has made an impressive comeback with 2006's "The Hoax" and in this film as Hunt, creates a dynamic character who is the epitome of a once honest man left with a distorted ego and little else. Hunt is seeking revenge and glory as he rekindles his passion for war-time reporting, an image Gere seems to capture with a natural ease.

The success of the story also revolves around "Crash" star Terrance Howard who, with the reckless suave as Duck, falls perfectly into place. Howard plays a journalist who has seen so much butchery that he relies on humor to swallow the violence. It is through Howard's experience that he is able to achieve success in such a difficult role.

"The Hunting Party" displays sweeping shots of impeccable countryside landscape scarred by artillery, the immense poverty left over by a devastating war and the broken souls of Sarajevo. As the trio embarks on their post-war journey there is an ironic and cinematographically immaculate shot of a lone cement wall emblazoned with the ubiquitous "Enjoy Coca-Cola" logo replaced with a Bosnia translation and marked with the blast of a Serbian rocket.

The combination of dark humor and a resounding political resonance calls to question the American role in foreign conflicts. The viewer is poignantly reminded that the reporters found and captured the number one war criminal in only three days while NATO, the UN, the CIA, the Hague and the Marines have all been "looking" for over five years – 25,000 troops in a country less than 20,000 square miles – and failed to make any progress. Leaving the theater, the viewer not only wants to know more about the Bosnian conflict, but wishes they had been able to be there to do something about it.