The Montgomery County Council unanimously passed the Darfur divestment bill at its council meeting yesterday. According to Dale Tibbitts, Chief of Staff for Councilmember Marc Elrich, the bill divests and frees county pension funds from companies involved with Sudan, in an effort to reduce the financial resources of the government and help end the genocide in Darfur. Students for Global Responsibility (SGR) helped persuade the county council to propose the bill and actively promoted the bill along with other students from around the county. 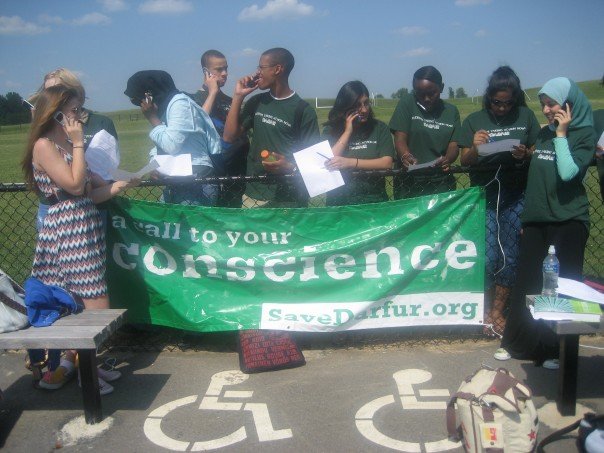 Photo: Students from Magruder voice their support for Bill 3-08 in a call-in. Photo courtesy of Benjamin Simon.

Photo: Students from Magruder voice their support for Bill 3-08 in a call-in. Photo courtesy of Benjamin Simon.

According to the Genocide Intervention Network, which supports civilian protection from genocide and whose members helped promote the bill, hundreds of thousands of people have died and more than two million have been displaced because of the conflict. The recently passed bill would stop Montgomery County money from being invested in companies that conduct business with the Sudan government, thus preventing Montgomery County money from landing in the treasury of the Sudanese government.

Montgomery County is now the second county in the United States to pass a divestment bill, after Los Angeles County in California. The implementation of this bill will result in $40 million in assets dissolved from the Sudan government, according to SGR co-President Benjamin Simon.

The proposed bill prohibited the Montgomery County Employees' Retirement System from investing money in companies that conduct business with the government of Sudan. According to Tibbitts, the County Council added an amendment before passing the legislation, expanding the bill to not only divest the county employee pension fund, but also the employee health fund. "The employee health fund is not a large fund, but if it grows, it would still be listed in the divestment," Tibbitts said. The divestment begun by the bill will end only when the U.S. president notifies Congress that the
genocide in Darfur has ended.

The bill was first proposed on Feb. 12, after students from Blair and other Montgomery County schools approached Elrich with the idea, and Elrich contacted other council members and drafted the bill. According to Simon, members of SGR and tens of other students from at least 10 other Montgomery County high or middle schools actively lobbied council members to promote the bill by sending postcards, making phone calls and organizing sit-ins.

During the April 1 council meeting, Elrich thanked the students for bringing the issue of divestment to their attention, according to Tibbitts. Council President Mike Knapp also expressed his encouragement that students were involved with the political process.

Simon, who has been working to persuade the county to divest since August 2007, found his efforts rewarded in the passage of the bill. "I could not be more pleased with the bill's passage," he said. He said that the campaign to get the bill proposed and passed was "one big lesson in civics," and that "it feels good to make a positive change."