It was 6:00 a.m. and the sun was slowly rising beyond the horizon. In the distance, a rooster warned the start of a new day - a replacement for the usual alarm clock. Looking around, junior Rachel Bernstein realized that this was not her room, not her house, in fact, this was not even America - this was El Salvador.

For the past three years, the Washington Ethical Society (WES) has organized a two and a half week trip for high school students and adults to various El Salvador villages to help improve the impoverished communities. On the first day, all group members arrive in San Salvador, the capital, where they unwind, tour the city and visit museums. After three days everyone is divided into three groups, before traveling to designated villages where they stay with El Salvadoran families and help build a preschool and an afterschool center and provided dental services. 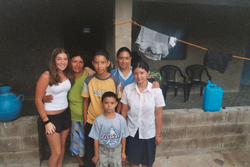 Before the actual trip, WES held mandatory meetings to discuss the history of El Salvador and learn about its civil war's affect on the citizens. Everyone received information about the villages they were going to stay in by reading the reflections of the visitors from the previous year.

This vast amount of information made some anxious. Bernstein said that she was not sure what the outcome of the journey would be. "Not all my thoughts were positive. Some of the things they told us were scary; like that we could get sick [because of the impure water]," she remembers.

Bernstein was not the only one with those uncertainties; other parents who attended this trip also felt that way. Catherine Bernard, one of the adults on the trip, said that she was just as nervous as many of the kids about visiting a new country. "I had never been there before. I was scared," she recalls.

Upon arrival in the Las Penas village, the Las Penas group attended a Mass at a local village church. After the service, the group toured the small village. All of the groups were assigned to families with whom they were going to live with for the remainder of the trip.

After settling in, the students and adults were introduced to their daily schedules, which included getting up as early as 6:00 a.m. Another challenge of the village life was the lack of running hot water, or any running water, for that matter. Having no showers or toilets made the morning routine difficult to get used to but helped everyone understand the daily challenges the villagers went through. 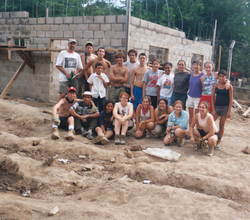 Photo: The Las Penas group, who worked on building an afterschool center for village kids, pose in front of the almost finished structure on the last day of work in the village. Photo Courtesy of Rachel Bernstein

Photo: The Las Penas group, who worked on building an afterschool center for village kids, pose in front of the almost finished structure on the last day of work in the village. Photo Courtesy of Rachel Bernstein

Still, these changes did not deter any of the students. Instead, junior Anne Denenberg and others embraced everything they saw in the village. "I loved all of [the aspects of village life], and never got tired or sick of it. We went to learn about their culture, and the best way to do this was to live the way [the villagers] did," said Denenberg.

Around 7:00 a.m., after everyone was ready, it was time for breakfast, which lasted till 8:00 a.m. After breakfast, everyone went to the construction site to work on the buildings by mixing cement, shoveling and carrying bricks, until it was too hot to work.

During the hottest hours of the day, at around 12- 1 p.m., it was lunch time, which was followed by an afternoon break till 2 p.m., and dinner that started at 6 p.m. For some, lunch was the best part of the day, because they could try a new cuisine and taste some of the traditional foods such as tacos, pupusas and quesadillas.

Nevertheless, at the end of the two weeks, some students thought that the food was too repetitive. For senior Lee Shields, tasting food from a new culture was splendid, but felt that eating the same food became tiresome for his taste buds. "We ate tortillas and pupusas, and [while] the food was pretty good, it did get old after a while, because all we ate was rice, beans and chicken," says Shields.

After lunch and break time, students cooled off in the stream, played soccer and card games or just talked. During the construction hours, each group worked on a different building. The Corozal worked on building a preschool and Las Penas group on an afterschool center, where village kids can hang out instead of being in streets where they are prone to getting into trouble.

On some days, after work, people would head to meetings held on a porch of one of the houses where they would discuss their work and listen to guest speakers who talked about El Salvador's history.

Although Denenberg felt that these meetings were educational, she thought there were too many of them. "It was interesting to listen and learn about the history of El Salvador, but they had so many that it got overwhelming and you started to blank out." Said Denenberg. "We wanted to learn more about the culture and their future, not spend so much time on their past."

After the meetings and dinner, it was time to unwind. This was Denenberg's favorite time "because you felt that you accomplished a lot during the day and just spent the last couple of hours of the day just relaxing," she said.

During the evening, the students would go over to each others' houses, play games with the neighbors and learn more about the country they were living in.

Heading back to the States

At the end of the two and a half weeks in El Salvador, the students and adults packed up their bags and said good-bye to their host families, the villages and the structure that they put so much time and effort into building.

Before making the trip, Bernstein would listen to the reflections of students who went on the trip last year and would doubt that the experience would greatly affect her as it had others. Later she realized that the trip in fact did just that. "When I went into this, I told myself that I was not going to turn into one of those people who said that they have changed, but I feel that I have changed, a lot," she said, adding that now there are "so many things that I appreciate more than I did before."

Kathyrn Margaret Goetz, a member of the WES and organizer of the El Salvador trip, said the trip was to help "create a better life in the communities of El Salvador, where local leaders have a vision of a better life but do not have the resources to make it happen." In addition, it helped the American students get a better idea of how the rest of the world lives, she said.

This indeed was a life-altering experience for Denenberg, who feels that this trip has "inspired me to go to other countries and do this sort of community work."