Joshua Starr plans to listen and learn from community members 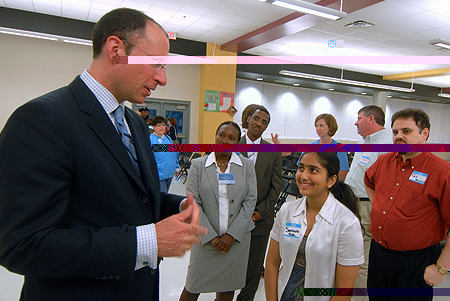 Photo: Superintendent Joshua Starr talking to a student at a Listen and Learn event.

Photo: Superintendent Joshua Starr talking to a student at a Listen and Learn event.

Starr, who was superintendent of the Stamford school system prior to joining Montgomery County Public School (MCPS), said the "Listen and Learn" program will allow him to address the County's prominent concerns and communicate his intentions for the MCPS system. "This is a way for me to listen to folks about what's going on," he said to the crowd of parents and students. "I'm forming opinions [at this stage]."

The first "Listen and Learn" event was held on Sept. 19 at Albert Einstein High School. Here Starr revealed MCPS's new curriculum for elementary schools, which will be implemented countywide, called Curriculum 2.0, and addressed other concerns.

According to the MCPS website, the upgraded curriculum will blend elective subjects with the core content areas. "Curriculum 2.0 will provide more instructional focus on the arts, information literacy, science, social studies and physical education. By blending these subjects with the core content areas of reading, writing and mathematics, students will receive instruction across all subjects in early grades," Starr said.

There has been a lot of positive feedback from members of Montgomery County since the curriculum was introduced. Barbara Henderson, President of the Montgomery County Young Democrats, believed that it will give students a more well rounded education. "Grade school is meant to prepare kids for life after the classroom, and MCPS's Curriculum 2.0 does just that. It is heartening to see states move away from teaching for tests, and teaching for life," Henderson said.

Legislative Aide Dave Kunes also commended Starr on his work as superintendent. "I tend to fall more in line with Starr's educational philosophies… I like that he didn't come in and knock the teachers' union and supports more partnership between teachers and administrators," Kunes said.

During the "Listen and Learn," Starr recognized how the county met its Adequate Yearly Progress (AYP). "We're the first county to get to the moon," he said, referencing MCPS's AYP and graduation rate successes. According to Education Week, MCPS has the highest graduation rate in the country. Eighty-five percent of students in Montgomery County graduate with a diploma, while the national average is seventy-one percent.

Throughout the event, parents and students raised questions about the safety and availability of public transportation and the county's emphasis on taking high-level courses. Though MCPS is known for its rigorous curriculum, many parents stressed that the current system is excessively difficult for students. Starr expressed his dissatisfaction towards the amount of stress being put on students under the current curriculum. "We are in this dangerous place [because] kids could be doing so much more, and they should be," he said.