Conquering the nation's capital, one checkpoint at a time

The date: May 15. The city: Washington D.C. The mission: survival. With a thirst for adventure, this reporter set out on Saturday night to survive the streets of our nation's capital in the "Journey to the End of the Night.” 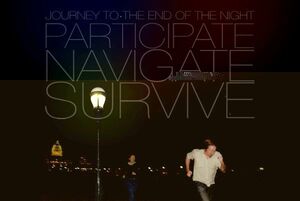 Journey to the End of the Night

Photo: Survive D.C., part of the Journey to the End of the Night games, is an exciting race around D.C.

Photo: Survive D.C., part of the Journey to the End of the Night games, is an exciting race around D.C.

Going into the race at Dupont Circle, she knew the rules of the game and its history. The "Journey to the End of the Night" games are run by a group of volunteers and exist in five cities throughout the nation, but Survive D.C. has one goal: get to every checkpoint, which are scattered throughout the city, without getting tagged by a "chaser.” If a person is tagged they then become a chaser. Sounds simple enough, right?

Wrong. Shortly after the starting gun, this reporter learned that there was more to this game than she originally thought. She found that one needs to be well-equipped with the survival essentials in order to navigate this bustling city. Now you can learn from this survivor's initial strategies as well as her mistakes in order to become a true champion of D.C.

Anyone who sets out to adventure through D.C.'s streets must already possess courage to make it through the night; but what sets a true survivor apart from the rest is preparedness. Survivors must be geared with foreknowledge of both the city and the Metro, running shoes, a stomach full of food and a bottle of water. Fanny packs become an advantageous asset in this situation.

Contrary to popular belief, physical fitness alone is not the sole factor to surviving this city. Although it does help to be quick on one's feet and to have sharp peripheral vision, surviving D.C. is more about strategy than anything else – a balance of both physical and mental agility. Several players used stealthy and out of the ordinary tactics. In fact, when this reporter was eventually caught and became a chaser, she noticed several players that had disguised themselves as regular pedestrians, dressed up as if they were going out to dinner so they could walk by chasers and go unnoticed. Clearly, these people are some of D.C.'s cleverest survivors and way out of this reporter's league. 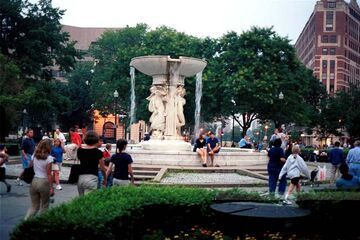 Photo: The game's start is in Dupont Circle, a great hub for people and delicious food.

Photo: The game's start is in Dupont Circle, a great hub for people and delicious food.

While one's own survival is the ultimate objective, one doesn't want to be roaming the city alone at night. Therefore, it is important to maintain a core group of two to three people. This is essential for one's survival – not just in the game, but in the city as well. Although this reporter did find herself walking a few blocks alone in Northwest D.C., the help of cell phones and important landmarks helped her to consistently reunite with her group and continue on in the game.

Maintenance of a core survival squad is imperative. Remember: keep the group small and only composed of people who are quick or who can navigate well. This reporter's group was originally composed of ten people, but was quickly cut down after chasers threatened to catch members of the group.

To enhance the group's dynamic, each member should play a different role. This writer suggests that every group have a street navigator, a metro navigator and a banker – the person who buys everyone frozen yogurt at Mr. Yogato in Dupont Circle, the game's starting point. Don't be fooled – each of these members is equally important and will contribute to the success of the team.

Knowledge about how to Survive D.C. comes primarily from experiencing the game. It wasn't until this reporter got past the first checkpoint of the race to realize that chasers strategically hid outside of checkpoints waiting to tag players. It is good to have a game plan; but most importantly, a true D.C. adventurer must be adaptable. Elite survivors are versatile and are able to think quickly on their feet.

And even if it is one's first time participating in this game, pure luck can get you pretty far. Basic knowledge of the Metro will help you to get from checkpoint to checkpoint, but watch out! Though Metro stations are deemed "Safe Zones,” chasers often line themselves up outside Metro stations waiting to tag helpless players.

Tips and tricks of the trade 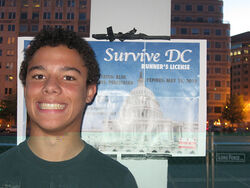 Photo: Senior Aaron Baldwin poses for a mandatory picture at the first checkpoint in the game.

Photo: Senior Aaron Baldwin poses for a mandatory picture at the first checkpoint in the game.

Now that you've got your survival essentials, your group and your game plan, you're ready to hit the D.C. streets and start dodging chasers! But before you do, learn from this reporter's discoveries and faults by reading these survival tips so that you can have your own successful adventure.

Survival Tip 1: Avoid busy streets that surround checkpoints.
Upon the game's beginning at Dupont Circle, every participant receives a map. Use this map to your advantage. Plan out your route to avoid the busier intersections that everyone else will probably take – back roads are your friends!

Survival Tip 2: Safety first.
Above everything else, prioritize your safety. You are not Frogger, so it's not a good plan to run into traffic in the middle of 16th Street. And just as you were told when you were eight, don't talk to strangers – especially in this game when they might be out to tag you!

Survival Tip 3: Wear your ribbon discretely.
All participants sport a blue ribbon that symbolizes your participation in the game. While the ribbon must be visible, it is not wise to wear the ribbon in a flashy manner that shows it off to chasers. Don't forget: in this game orange means run — if you see a person with an orange ribbon, leave ASAP!

Survival Tip 4:Enjoy being a chaser.
Even with heading into the game with a detailed plan and determined attitude, the likelihood of surviving to the end is very low. But if you are caught, don't fret! Being a chaser, getting to tag people out of the game and plotting how to eliminate your friends is just as fun.

Survival Tip 5:Have a back up plan.
If you become a chaser early in the night and decide to give up on the game, it is suggested that you have another activity to do while in the exciting city of D.C. Running around makes everyone hungry so know good places to eat and how to get there – here at Silver Chips Online we suggest Chinatown and Dupont Circle as lovely dining locations with charming restaurants and fabulous people. Both contain their own Metro Stop.