More students caught in hallways, but some teachers have not benefited

Almost two months after the hall sweeps have been put in place, the administration, security team and teachers are contributing ideas to improve the system while also recognizing the noticeable effects it has had on students, according to assistant principal Andrew Coleman. 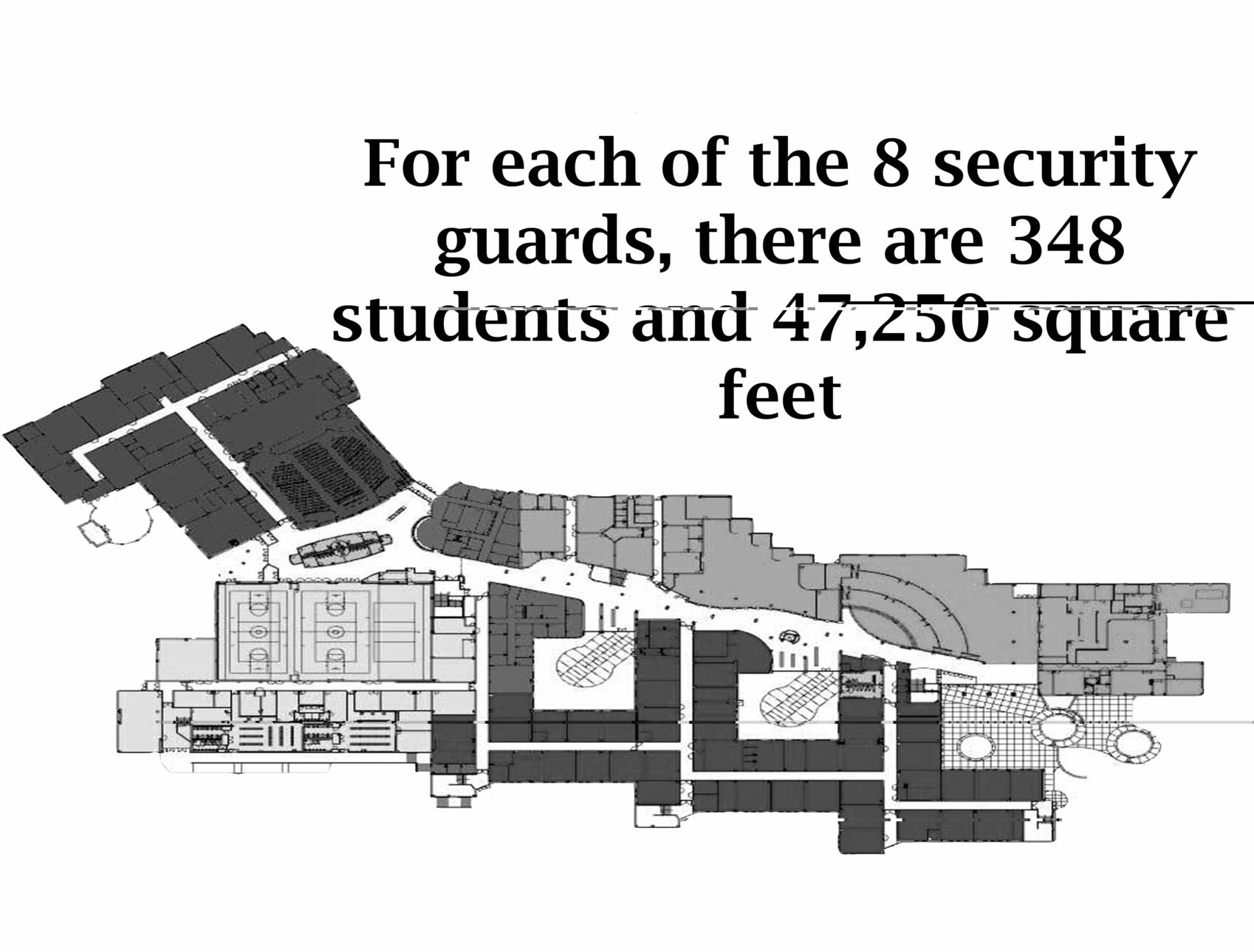 Photo:
The hall sweeps policy began this year on March 8, with disciplinary policies enforced beginning March 9 for students who were late to classes after first block. When teachers lock their doors at the late bell, the security team rounds up students left in the halls and issues detention slips. Students may serve detention in room 240 or 160 during lunch or after school, according to security team leader Cedric Boatman.

According to Boatman, who is in charge of executing the hall sweeps plan, as of April 19, 524 students had been caught, 262 of whom had served their detention, with Boatman estimating about 110 students as repeat offenders, meaning that they have been caught or served detention more than once since the hall sweeps began. The remaining 262 caught students have outstanding detentions. 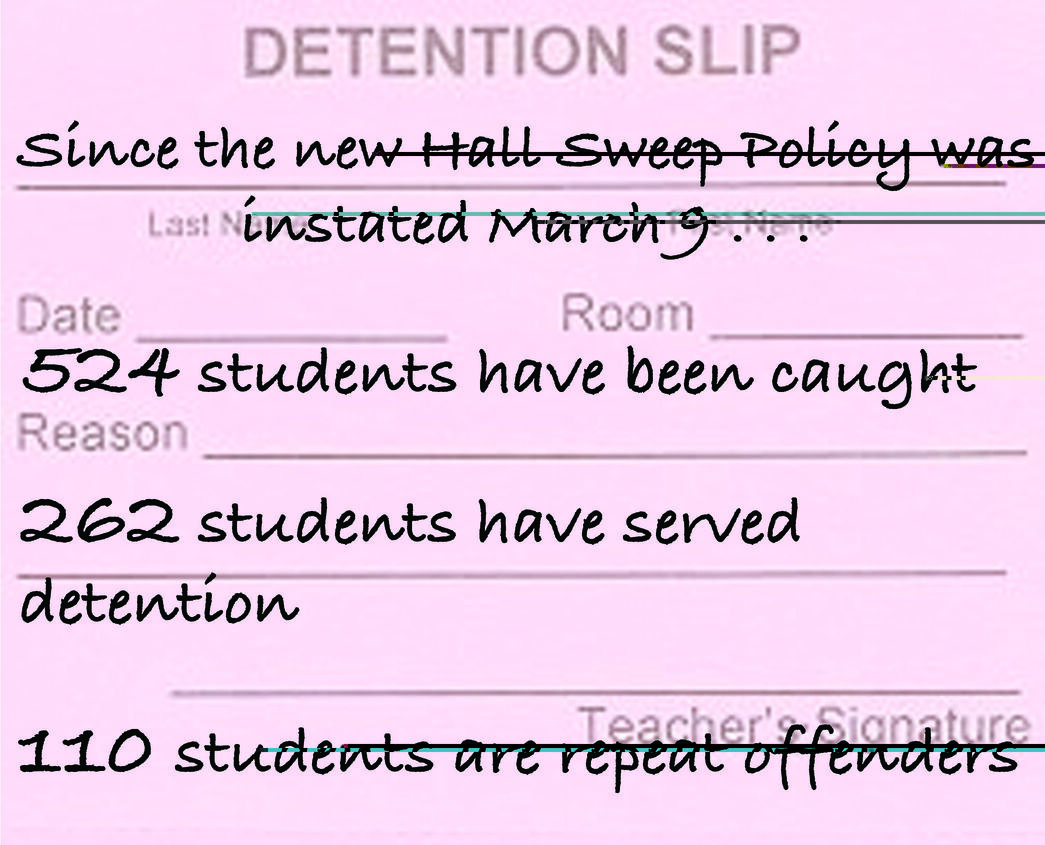 Photo:
Though many students have not yet served their punishment, Coleman said that the policy has been working so far because the daily data he gets from Boatman shows a decrease in the number of students late to class each day. Boatman added that he will continue to strive for gathering the majority of the students late to class, and is getting closer to that goal. "If we get 95 percent, we've done our job," he said.

Teachers have had mixed responses to the hall sweeps policy since they began. English teacher Judith Smith said that although the hall sweeps do not apply for first block, which is when Smith has the greatest number of tardy students, she has seen changes during other times of the school day. "I think students are much more actively focused on getting to class now," she said. "It's had a positive effect."

However, social studies teacher David West believes that because he consistently marked tardy students and applied the loss of credit (LC) policy, the hall sweeps did not evoke any significant changes in his students. "I don't have a problem with tardies because I [apply loss of credit to late] students, and I think that's effective," he said.

English teacher Sandra Ivey also said that she has never had many problems with late students, and she feels that the hall sweeps policy has had an adverse effect on instruction time and on her relationships with students. Ivey pointed out one example: In her 5A class, when she tried to enforce the hall sweeps policy, one student got angry with her and refused to participate for the rest of class. Ivey said that if she had marked the student late, he or she would not have had to leave class and miss additional instruction time. "That's an extra five or ten minutes of what's going on in class that [the student] missed," Ivey said. "I get what they're trying to do, but it will raise the incidence of negative student-teacher relations."

Security assistant David Ngbea, who is in charge of detention, said that although he knows some students have been caught, he had hoped that the number of tardy students would decrease more drastically than it has thus far. "I thought that it would be a deterrent," he said. "All I know is that detention slips are still being given and students are still in the hallway."

Boatman has been answering questions regarding the hall sweeps policy at Instructional Leadership Team (ILT) meetings, which include administrators and certain staff members, and he and Coleman have been working together to continue tweaking the policy as necessary. Just as Smith had more students late to her first block than to any other period, Coleman said that others have suggested implementing hall sweeps when the bell rings at 7:25 a.m. Coleman said that this would be difficult, however, because security assistants are spread throughout the building and outside in the mornings to make sure everyone enters the school safely.

Hall sweeps as a general policy have been part of national school security initiatives since at least the 1980s, and they can be very effective, according to Kenneth Trump, president of National School Safety and Security Services, an organization of school safety consultation experts based in Cleveland. "When properly planned and implemented, with consistent and reasonable consequences administered, hall sweeps can be an effective tool in a broader, comprehensive approach to school safety," Trump said. "Supervision is extremely important to school safety."

Trump added that detentions are probably a reasonable consequence for being caught in the hall sweeps. For the repeat offenders, Trump said, a harsher punishment would not change behavior, but detention should deter the others.