The Blair swim and dive team (4-0) defeated the Quince Orchard Cougars 184-158 Saturday morning, adding another solid season performance to their record despite a snowstorm that delayed the meet by one hour. The boys' team won comfortably with a final score of 95-76, while the girls pulled out a close 89-82 victory. 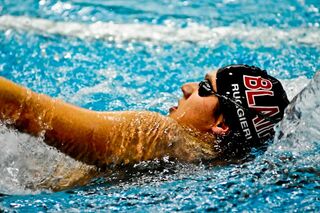 Due to the heavy snowfall, many Blair swimmers arrived to the meet late and lost time to warm up in the pool. Senior co-captain Nate Hukill swam the boys' 200 Medley relay without having warmed up. Nevertheless, he, junior Winston Liu, senior Matthew Kannan and freshman Steve Ge won the race with a time of 1:46.05 minutes, beating Quince Orchard by over three seconds.

Despite the storm, Blair's lineup remained unchanged. Coach David Swaney knew the girls were facing tough competition, but remained confident that his team could keep up. "They've got fast girls…we knew it was going to be good. Despite the weather, we had no substitutions. It was a fair fight: all of our fastest against their fastest," he said.

The girls captured four victories and placed second in seven out of ten events. In the girls' 100 Free, senior co-captain Jenna Williams out-touched her opponent by 0.1 seconds, beating her with a total time of 57.68 seconds. 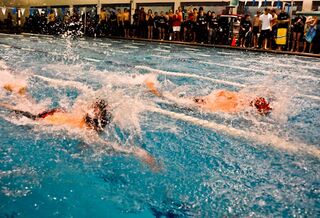 Photo: The meet against Quince Orchard was Blair's third overall win in a row.

Photo: The meet against Quince Orchard was Blair's third overall win in a row.

The boys won six out of ten events and placed second in eight of them. In spite of their more definitive victory, some of the boys' races were also close. In the boys' 50 Free, junior Dennis Li came in second to Quince Orchard with a time of 24.36 seconds, losing to his opponent by only 0.22 seconds.

Even with their close races, the boys won by 19 points overall, dominating Quince Orchard in events such as the boys' 200 Individual Medley. Junior co-captain Eric Ruggieri, senior Matthew Kannan and Ge placed first, second and third respectively. Ruggieri blew the competition away with a time of 2:05.57 minutes. Kannan swam the race in 2:13.50 minutes and Ge received a time of 2:15.92 minutes. Ge beat the next fastest Quince Orchard swimmer by 7.26 seconds.

Blair girls also barely ousted Quince Orchard in the girls' 100 Breaststroke and 200 Medley relay, winning by roughly one second each time. Senior Molly Branson earned first place in the 100 Breast with a time of 1:11.35 minutes. Williams, senior co-captain Allison Arai, freshman Emily Lathrop and freshman Jennifer Arai brought Blair another victory in the 200 Medley with a time of 2:00.20 minutes. 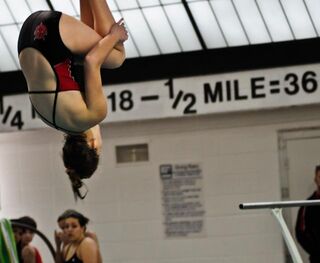 Ruggieri believes an essential part of Blair's win was the amount of second place wins both the girls and boys achieved. "We went one-two and one-two-three a lot and that shows our depth. It was a big part of us, especially the girls, in winning the meet. If we can place multiple times, the outcome of the meet will change dramatically," he said.

The boys also showed their strength in the 100 Breast and 500 Free. Senior co-captain Jeff Lin beat his opponent by roughly four seconds in the Breast. Sophomore Nik Hammond swam the Free in 5:06.06 minutes, seven seconds faster than Kannan's second place time of 5:13.04 minutes and over 30 seconds faster than the third-place Quince Orchard swimmer.

As the girls continue to improve steadily, Swaney has high expectations for his team. "I expect [solid wins] from the girls right now, definitely," he said.

Despite Blair's dominating performance in some events, Swaney wasn't entirely happy with Blair's results. "It was a slow pool, a cold day and we were really late. We didn't have a terrible meet, but it wasn't exceptional," he said.

Blair swim and dive will have their next meet against Damascus on Saturday, Feb. 6 at 12 p.m. at Montgomery College, Takoma Campus.