Blair's swim and dive team fell to the Sherwood Warriors in the Division II relay carnival on Saturday, but defeated Northwest, Blake, Poolesville and Quince Orchard. Blair won only one of its relays, but came in second to either Sherwood or Northwest in six other races. 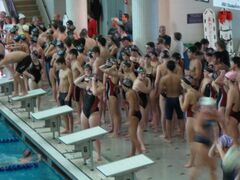 Photo: Relay squads from different schools get ready for the first event of the day. Picture courtesy of Bev McGehee

Photo: Relay squads from different schools get ready for the first event of the day. Picture courtesy of Bev McGehee

The relay carnival, in which events feature four or more swimmers who each swim 50 yards of a designated stroke, was marked by strong performances by the girls' team. The many mixed and women's events in the meet gave the Blair girls a chance to prove their speed. Junior Larisa Antonisse and freshman Emily Lathrop contributed to Blair's second place wins in the Mixed 200 Butterfly and Mixed 200 Backstroke. The most notable women's event was the 200 Freestyle, in which freshman Jennifer Arai, junior co-captain Laura McGehee, Antonisse and senior co-captain Jenna Williams captured third with a time of 1:45:49.

Williams partially attributed the girls' success to the newer swimmers on the team. "We're a lot stronger than we were last year," she said, "and our younger swimmers are really stepping up." Coach David Swaney agreed and named Antonisse and Lathrop as two of Blair's top swimmers of he day.

In addition to the Men's Fly, Hukill swam two other events and Ge and Foster both swam in three events. Ruggieri anchored three second-place events; his fastest split time out of all three was 25.96 seconds in the Mixed Fly.

Overall, Swaney was satisfied with Blair's performance. "We met expectations," he said. "We were the usual…the girls did better than expected and the boys did as expected, but have tougher competition," Swaney said. Sherwood, which moved down from Division I last year, and Northwest represent the greatest challenges for the boys' team. Ruggieri said that Blair should watch out for Northwest's team when they swim against them next week. "We especially have to adjust to the up and coming Northwest men's breaststroke squad," he said.

Senior co-captain Allison Arai also recognized that Sherwood poses a significant threat. She hoped Blair can develop their skills before the team swims against Sherwood later this season. "We need to work on things like our turns, starts and finishes. So hopefully we can push Sherwood back to the end of the season. By then we'll have [improved]," she said.

Blair's swim and dive team competes in their next meet on Saturday, Jan. 16 against Northwest at the Olney Swim Center at 9:15 a.m.