Sydney White (Bynes) is a bright college freshman whose one hope is to enter Kappa Phi, her late mother's sorority at Southern Atlantic University (SAU), which is headed by the stereotypically conceited blonde Rachel Witchburn (Paxton). Unfortunately, the Greek life is not the most accommodating, and when Sydney unknowingly attracts the attention of Rachel's ex-boyfriend Tyler Prince (Long), her life spirals down to its deepest pit.

Finding herself homeless, Sydney is convinced that she can create successful school politicians out of the SAU's seven renowned dorks. With the support of her crew, Sydney vows to stop Greek rule of SAU and defeat Rachel in the upcoming student council presidential election. One can only guess whether or not she succeeds in the movie's typical and unoriginal script. 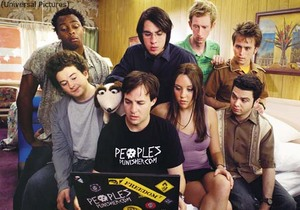 Whether the characters' names were meant to play off Disney characters or whether they were part of an unplanned coincidence, the film's plot nevertheless is reminiscent of a fairytale. Bynes plays her signature role of an overly optimistic, strong-willed and hard-working girl — anyone remember "What a Girl Wants"? — who is thrown into a seemingly impossible situation with her "evil sorority sisters."

Prince Tyler is not only picture-perfect, but is also equally kind, charming and thoughtful. He even commits to weekly community service at a soup kitchen. Rachel Witchburn is, as her name suggests, quite a witch indeed. Her character's parallels to Snow White's step-mother are readily apparent, as both have an obsessive daily ritual of asking something along the lines of, "Mirror, mirror, on my computer, who's the fairest one of all?"

The clichés in the film's plot are just as painful as the cookie-cutter characters themselves. Tyler treats Sydney to a sunset dinner; Sydney is happily surprised, but the audience won't be appreciative of the hackneyed romantic setting. Lenny (Jack Carpenter), a dorky classmate with thousands of undiscovered allergies, is ditched by Sydney while the two are on a date but also coincidentally becomes her savior when she is thrown out of the sorority home on a rainy night. And while family values usually play an impressive role in films, the relationship between Sydney and her plumber father seems forced on the big screen. The one exception to the uncomfortable relationship is when he tries to teach Sydney the inner workings of the female body with the help of plumbing parts and tools.

What make the film somewhat bearable is probably Sydney's crew of seven adorable dorks. They provide the saving grace — comic relief — each in his own special way. Lenny is awkwardly cute, especially when he wholeheartedly backs up Sydney and her unfavorable position as an ex-Greek. Terrence (Jeremy Howard) is scarily smart the quirkiest.

This movie's biggest problem is it lack of substance. The thin plot makes it uninteresting to watch, so unless you are fascinated by the kinds of movies that thrill pre-teens.

"Sydney White" is rated PG-13 for some language, sexual humor and partying and is now playing in all theaters.