"Sydney White" is no fairy tale

"Snow White and the Seven Dwarves" is a classic fairy tale that everyone hears when they are kids. But what happens when Snow White goes to college? "Sydney White" takes this tale on a spin, making it into a modern-day comedy, mixing in the theme of geeks taking revenge on the popular crowd. Although the plot is too foreseeable, the movie is still enjoyable, with some pleasant humor and sincere acting.

Sydney White (Amanda Bynes) is a tomboy raised by her father, Paul White (John Schneider), and his team of construction workers. Sydney enters college hoping to follow in her deceased mother's footsteps and join the Kappa Phi Nu sorority. Only problem is, Kappa girls are now Barbie dolls with a distaste for anyone who's not thin. To make matters worse, Kappa president Rachel Whitchburn (Sara Paxton), is a rich, snobbish bully who seems to have control over the whole student body as the student council president. All characters in the fairy tale take some form in the movie, even the seven dwarves, who are equated to the seven dorks, and Prince Charming, who comes in the form of Tyler Prince (Matt Long), the popular fraternity president who seemingly falls for Sydney at first sight. 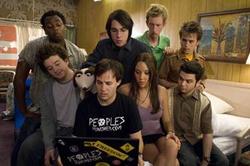 Rachel takes an immediate dislike to Sydney and successfully boots her out of the sorority. Sydney is then taken in by the seven dorks, who live in the "Vortex," a broken down cottage that is synonymous with the outcasts of the school's social network. Eventually, with the support of the dorks and her prince, Sydney tries to overthrow Rachel and the college Greek system by running for student council president.

So then, where's the mirror, the poisonous apple and the sleeping maiden? Not to worry, screen writer Chad Creasy has managed to incorporate all those vital details within the script as well. The mirror is now an online poll of the hottest women on campus. The poisonous apple is the apple on Sydney's Mac computer when her hard drive is erased. As for the sleeping maiden…Sydney decides to pull an all-nighter.

The storyline is predictable, following the classical story of "Snow White" almost blow by blow. The result of each scene is so obvious the viewer can almost turn the movie into a game of guessing who or what in the movie represent which person or thing in "Snow White." Every dwarf is reincarnated as a dork: one has allergies to everything, one is a bit dumb but childishly cute, one can't stop sleeping, one is smart, one writes an angry blog and one wants to be the ultimate ladies' man.

Apart from the predictable plot, the comedy contains some sharp dialogue and clever humor. Because Sydney's father is a plumber, there are many humorous references to his job. The most memorable one is probably how Paul White attempts to use a pump and some tubes to explain the menstrual cycle to his young daughter. The best line in the film is in the hilariously witty remake of the "Heigh-Ho" scene. The seven dorks file past Rachel with their student council campaign signs and greet her with a, "Hi ho."

Bynes works her magic in the movie as the cute but innocent girl who's hard-working and ready to revolt. Bynes naturally fits in the role of the tomboy and smart aleck, with experience from roles in films like "She's the Man." Paxon plays the thoroughly evil blonde with brains, perfected malicious glares and wicked smirks. Along with the evil, Paxon has also managed the prim and snooty attitude. Long manages the perfect prince with not only his looks, but also with his genuine smiles and kindness. His virtuous nature and love-struck emotions is made obvious to the viewers, proving he's not just another popular party boy.

Who knew that predictable plots would be enjoyable? But when there's some nice clean humor and clever scenes, it doesn't really matter if everyone already knows the ending. As long as the viewers don't expect to be wowed by a great story, "Sydney White" is a fun and endearing comedy.

"Sydney White" (90 minutes) is rated PG-13 for some language, sexual humor and partying. It is now playing in theaters everywhere.